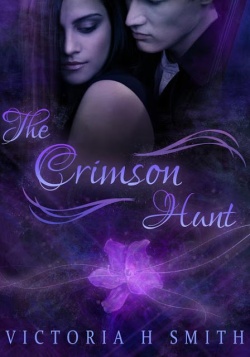 From what I’ve gathered, New Adult books are trending fast. Therefore, when I discovered that Victoria H. Smith has a forthcoming New Adult sci-fi romance--THE CRIMSON HUNT (Eldaen Light Chronicles, #1)--I decided to pass along the news. It took some hunting, but I found that the publisher is Curiosity Quills Press.

Her house reeks of keggers past and her bestie is just a slight bit vulgar. But the thing is—they both aid in making life refreshingly uneventful.

So much for hard-earned mediocrity when Luca Grinaldi appears on the scene.

Luca’s sudden presence on campus is hard to ignore. Those bright eyes act like a beacon to unsuspecting females, and with features like his, he’s got to be moonlighting for GQ. Luca hopelessly captivates Ariel with his confidence and charisma, but the mysteries surrounding him make him nearly untouchable. And just when Ariel grows close enough to unlock his secrets, a tragic event sends her life in a downward spiral.

That steady life is no longer an option and allies quickly become scarce. The mysterious Luca seems to be the only one willing to help her—but with that trust comes the burden of his secrets. He has a dark mission of otherworldly proportions, and is willing to sacrifice as many lives as it takes to see it completed.

Gone are the days of simply maintaining normalcy, and if Ariel isn’t cautious with her trust, so soon may be her future.


Thank goodness for tagging because going by cover and title alone I would have guessed this book was a paranormal/vampire romance. It has TWILIGHT written all over it, but hmm, maybe that was intentional given the target audience.

Read a short scene from the book here.

What are your thoughts about New Adult SFR? Does it interest you? Have you heard of any other titles on the horizon?