BLACK LIGHTNING: The Best Film About A Flying Volga Ever! 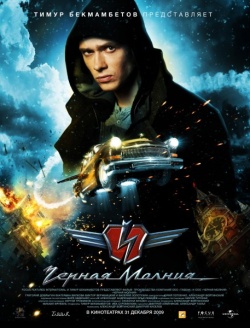 I first blogged about the Russian film CHERNAYA MOLNIYA, a.k.a. BLACK LIGHTNING, back in 2009. If you’ll recall, this film is a superhero adventure tale featuring a flying car—a “black 1966 GAZ 21 Volga,” to be exact. But it also has a heaping helping of romance! Here’s the trailer (it’s the lame American DVD/Blu-ray release version, but it shows the story pretty well):

One of the original Russian trailers is here.

I’d been wanting to see this film ever since I first heard about it—preferably for free in order to keep my budget in check. Imagine my delight when I discovered the title on Netflix while taking advantage of a free trial. Boo-yah!

Now that I’ve seen BLACK LIGHTNING, let me tell you just how much I adore it. Wow, what a lot of fun! The story hit all of my action-adventure buttons in just the right way. Some of the special effects were a little old school, but frankly that was a big part of the appeal. It's entertaining in the "you can't take this seriously" way that producer Timur Bekmambetov (NIGHT WATCH) loves to serve up, and it features some nice photography by DP Sergey Trofimov.

During the film I was bouncing in my seat at times. Okay, most of the time. So what was it about this film that gave me such a buzz?

I should begin by acknowledging the buyer-beware, completely subjective aspects of my viewing experience. For one thing, thanks to filmmakers like Gerry Anderson and movies like CHITTY CHITTY BANG BANG, I’ve long had a thing for flying cars. They just never get old for me.

BLACK LIGHTNING also featured one of my favorite science fiction tropes ever—scientific devices ahead of their time that are hidden away and then rediscovered in the future. The fact that directors Dmitriy Kiselev and Aleksandr Voytinskiy decided to combine lost inventions with a flying car is pure genius, I tell you! So those two items right there were guaranteed to make me tingle all over.

That said, the premise is a pretty polarizing one. Hero Dima (Grigoriy Dobyrgin) uses his flying Volga to fight the villain—kind of a love it or hate it deal.

The villain, Kuptsov, is after a huge diamond cache located beneath Moscow. To reach it, he has to drill beneath the city, which of course threatens its very existence. Yeah, I know—totally lame. I couldn’t really suspend my disbelief with that one. However, I was willing to overlook such shenanigans because OMG holy cow a FLYING VOLGA!!

Another thing you should know is that BLACK LIGHTNING is one of the most flagrant homages to THE AMAZING SPIDER-MAN that I’ve ever seen. Amazingly (heh), the film incorporates most of the basic Spider-Man elements while at the same time transcending the source material to become its own unique creation. I consider it an inspired reinvention of the Spider-Man story even though that element is also one of the film’s major flaws (because it’s so unbelievably derivative).

And the romance? Well, I wasn’t very excited about that subplot unfortunately but it was also one of the driving elements of the story. It's sweet and predictable, but then again, isn't that what you want in a piece of candy? The actors came across as very grounded so the “love interest” nature of the romance didn’t bother me as much as it normally would. Especially since Dima drives a fantastically souped up flying Volga! That part made everything in the film totally awesome. I was wearing my Volga-colored glasses the whole time, yes indeed.

Despite the flaws, BLACK LIGHTNING is now among my all-time favorite films and I look forward to repeat viewings. So if you’ve been thinking of checking out Netflix’s free trial, this film would be a definite reason to do that. That is to say, if you enjoy the concept of flying cars, blatant Spider-Man "homages," superhero coming of age stories, high-octane action, diamond-hungry billionaire tycoon villains, quirky scientists, and Russian heavy metal music!

By the way, if you’ve seen BLACK LIGHTNING, please tell me your impressions of it!