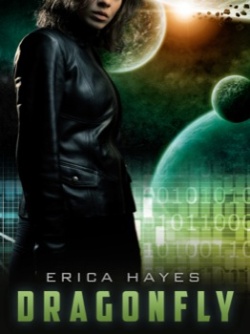 Can I just say, I love my blog job? Today I’m delighted to introduce you to Erica Hayes, author of DRAGONFLY. I invited her aboard to tell us about the book as well as her interest in science fiction romance. To catch you up to speed, here’s the story blurb:

Carrie Thatcher is a tough Imperial counter-terrorism agent. Her mission: pose as a sexy cyber-thief to entrap the notorious rebel Dragonfly, who’s planning a heist on the space station Casa de Esperanza; a orbital casino on the fringe of Imperial space.

And this assignment’s personal: Dragonfly murdered her closest friend, and she’s in no mood to show him mercy. Even getting stuck with the partner from hell—Malachite, her sociopathic ex-lover and the Empire’s most dangerous agent—can’t dampen her relish for the kill.

With Carrie’s expert weapons skills and penchant for cracking codes, insinuating herself into Dragonfly’s confidence should be easy. But is he the ruthless killer she was led to believe? Or has her precious Empire deceived her? With Malachite watching her every move, the slightest flinch in loyalty means death.

Carrie is soon racing to uncover an audacious treachery that will shock the Empire to its core … if she can stay alive for long enough to expose it.

Now let’s blast off into the depths of space for my interview with Erica Hayes!

The Galaxy Express: What’s the story behind DRAGONFLY?

Erica Hayes: DRAGONFLY started life as a romantic sf novella, about an Imperial secret agent who goes after the thieving rebel who killed her fiancé. But the story was too short – I had so much more I wanted to explore. Especially with the rebels – there was an entire universe of excellent disobedience and mayhem out there that I wasn't touching on!

So I made it into a novel. It has a casino cyber-heist, a stolen battleship crewed by criminal madmen, a kidnapping, and a few space battles. As well as a cool secret agent heroine, her psycho uber-agent mentor, and a brainiac rebel hero.

TGE: What attracted you to writing science fiction romance?

EH: I love spaceships and rayguns and cool futuristic tech! I've always been a fan of sci-fi television shows, from Star Trek: TNG through to Stargate: Universe, and I love how they set up their technology, the way you'd set up a magic system in a fantasy – there's so much scope for coolness! There's a smidge of 'real' science in DRAGONFLY, but it's closer to the 'never-mind-how-it-works' end of the scale.

Still, most tv sci-fi has an ensemble cast, which is hard to do in a book, unless you’re writing a big epic with the word count to match. I wanted to focus on just a couple of characters and their adventures.’ 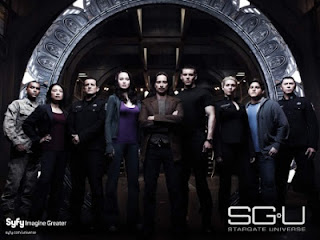 TGE: There are many stories featuring a ruthless “Empire.” What makes yours unique?

EH: The heroine's an Imperial agent. So you get to see the Empire from within, and understand their ideology. They're not cruel oppressors like, say, the Federation in Blake's 7, or Chronicles of Riddick's Necromonger zealots. Carrie's Empire is a bit more like the Peacekeepers in Farscape. They don't delight in suffering (with a few sick exceptions!) – they're just convinced their way is the only way. And that makes them more dangerous than your average selfish power-gatherers.

If you ask them, the Empire is a force for civilization and order in a chaotic universe, and in many ways it's true. They have the best health care, education and infrastructure. But they think that to be safe and secure, everyone has to follow their rules – and if an argument starts? After eight hundred years in charge, they've got the most and biggest weapons, and they will beat you into doing what's good for you.

So it's about the continuum between civilization and freedom: how much of one should you give up for the other?

Oh, and they're Russians. Or they were, once. That's what you get a thousand years later for privatizing the space program :)

EH: Naturally, she needs a lot of skills to be an effective secret agent. She's a clever actress, a smart crypto-cracker and security expert, and an excellent shot with her little glass-gun.

But Carrie's greatest strength is her determination to succeed. The Empire is class- and race-conscious, and Carrie comes from the wrong side of the tracks. To make it as an Imperial agent, she had to leave her old world behind. She's survived being disowned by her separatist family, the murder of her fiancé, and a broken heart, and she's still fighting for what she believes in. And when her belief system starts to crack, she doesn’t ignore the evidence – she asks the questions, even if she dreads the answers. That's tough!

TGE: What is the hero’s favorite weapon/gadget?

EH: His brain. He's a clever and unconventional thinker, and a mathematical genius. In a world so highly dependent on information security, that's a powerful weapon. This guy makes crypto-cracking sexy. I swear! Also, he carries around a little golden hyperchip computer that he programs to do cool stuff.

Carrie's favorite sexy gadget is an emotive transmitter – it transmits emotions along with your comms. It's the latest craze at her work. Why would you want this? Well, you probably don't, as it turns out, especially when you're talking to a sociopath like Carrie's boss agent…

TGE: Is DRAGONFLY a stand alone book or are you planning more stories in this setting?

EH: DRAGONFLY stands alone (that means you, romance readers!) but it does end on a bit of a cliffhanger. Carrie's story isn't over. So we'll see!

TGE: On a scale of 1-10, rate the action-adventure level for this story.

EH: It's probably 70:30 action to romance. Primarily it's an adventure story. Plenty of fights and action, but no explicit violence or gore.

TGE: What can readers expect as far as the heat level?

EH: A couple of steamy scenes. Compared to my other books? This one has a low heat level.

TGE: What was the last science fiction romance you read or watched? 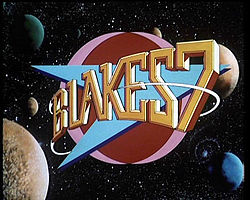 EH: Well, I was just watching that ep of Blake's 7 where Avon kills Space Commander Travis by shooting him in the back… does that count as the end of a tragic romance?

Apart from that: 'Terms and Conditions Apply' by Pippa Jay – a cute sexy romance! – and I'm about to start 'Ghost Planet' by Sharon Lynn Fisher.

Oh, and you can read the first two chapters of DRAGONFLY online for free! http://www.momentumbooks.com.au/books/dragonfly