Author Jenna Bennett's first foray into science fiction romance is FORTUNE'S HERO, book one of her "Soldiers of Fortune" series. Entangled Publishing is releasing this title in both digital (available now) and print formats (coming December 11).

I invited the author aboard so she could tell us about more about the series. But first, here's the blurb for FORTUNE'S HERO:

And now for my interview with Jenna Bennett!

The Galaxy Express: You’re best known for your “Do-It-Yourself Home Renovation” mysteries (Berkley Prime Crime) under the pen name Jennie Bentley and for the “Cutthroat Business” mysteries writing as Jenna Bennett. What sparked the idea for FORTUNE’S HERO, a science fiction romance?


Jenna Bennett: LOL! I blame a friend of mine, by the name of Wilfred Bereswill. Back in the early part of 2010, we were on a group blog together: the Working Stiffs. It was a bunch of Sisters in Crime from Pittsburgh, and then Wilfred and me.

Wilfred liked to write short fiction. I don’t know how to write anything short. I kept telling Will this. He refused to believe me. In February of 2010 – the shortest month of the year – he issued a challenge: write a 200 word flash fiction piece beginning with the sentence, “If you have to die, February is the best month for it.” (He said that the only reason he made the challenge 200 words, was because he figured I wouldn’t be able to do it in 100.)

It took me a while, because I really wasn’t kidding when I told him I don’t know how to write anything short, but eventually I came up with this:

If you have to die, February is the best month for it.

And Quinn Conlan was ready. After a year, three months, and sixteen days in the prison camp on Marica-3, he was more than ready. He’d die today, this hour, this very minute, if it would get him out of another session with the camp medical team.

They were the best in the galaxy. Both when it came to bringing a prisoner to death’s door and to making sure he didn’t walk through it.

And they’d be back. Soon. But maybe this time they wouldn’t revive him afterwards.

A man could dream, right?

Or not. Dreams are dangerous things.

Back on Earth, it was Valentine’s Day. Flowers, candy, sappy cards. Even in 3045, people celebrated a guy who’d been dead almost three centuries.

Someone else was bringing Josie flowers this year. Buying her candy. They’d told him that. Quinn didn’t know whether it was true or just another form of torture, but he’d decided to believe it. Without Josie, he had one less reason to stay alive.

He was ready, dammit. You hearing this, God? It was February. If he had to die anyway, might as well be now.

It’s 200 words exactly, and it was hell getting it there. I think it took longer to trim it down to that exact word count than it took to write in the first place. Because, believe me, it was quite a bit longer when I first finished writing it.

And it isn’t really a complete story, you know? Everyone else wrote these nice, neatly tied-up little stories about murder and mayhem—we were the Working Stiffs, after all—and I came up with a space smuggler sitting in a galactic prison on the outer edge of the backbeyond instead. A story that was by no means over.

(All the entries are here on this blog post if you want a look at the others:)

About six months later, in August, I signed up for an online class with the fabulous Heather Graham, and was given another assignment. Write a scene beginning with the words, “The blood dripped on the floor.”

Now, “the blood dripped on the floor,” is not something I’d normally write. (In the end, that particular sentence didn’t stay in the book.) But I wanted to do the assignment, and the only one of the characters I’d ever come up with, whom I could see being part of a story that began with “the blood dripped on the floor,” was Quinn. I’d never really forgotten him, and it was during that class that I came up with his character sketch, the first scene in the book—that now starts with “Quinn Conlan was bleeding to death,”—and the outline for the book. It didn’t end up having much in common with the original flash fiction piece, but that was the starting point.

I ended up selling it as a four book series, so in the end I got the last laugh. I really can’t write anything short.

TGE: Describe the basic story elements in the form of six tags.

TGE: In the universe of your Soldiers of Fortune series, what are the job requirements for a smuggler?

JB: Fast ship, good reflexes, healthy distrust of authority, smart-ass attitude. It helps if you lack morals and don’t have many hostages to fortune, but Quinn fails there.

TGE: What was your favorite part about writing a science fiction romance?

JB: Writing a science fiction romance wasn’t really any different from writing anything else. The research topics were different—usually it’s forensics and history; this time it was science and astronomy—but writing is writing, and crafting a story is crafting a story. It was fun to invent things, though.

But to be honest, the universe in Fortune’s Hero isn’t that different from our own, and the people are all regular people, who went out from Old Earth a few thousand years ago and settled other planets. There are no weird scaly-skinned aliens or anything like that. It’s a very human sort of story, that just happens to take place in a galaxy far, far away. The people who inhabit it are a lot like we are, motivated by all the same things: the desire for power, the hope of finding love, the loyalty to friends and family. I did have fun coming up with the various planets and their names, though!

TGE: Where is the Soldiers of Fortune series headed? Will there be an overarching plot?

JB: I guess it would be considered an overarching plot... It’s a four book series about the four members of the crew of this smuggling ship called the Good Fortune. When the first book opens, they’re all in prison on this moon called Marica-3, after being caught smuggling weapons to the insurgents on Marica, which is a planet under siege by Rhenians, who are people from a neighboring planet. The crew’s aim is to get out and get away and get home, in roughly that order. They can’t do it all in one book. Each book is a step on the way toward that goal, at the same time as each man meets a nice girl to fall in love with. I guess they may have to help overthrow the evil overlords and save the universe too, before it’s all said and done, but I haven’t actually gotten to that yet. 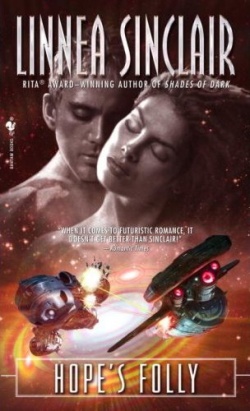 JB: I fell in love with the original Star Wars movie when it first came out back in the mid 1970s. I was pretty small then, much too small to appreciate Han Solo, but I did have a crush on Luke Skywalker for a while. None of the other Star Wars movies could hold a candle to that one, although I think I did see them all at one time or another. I never have watched Star Trek, but maybe I shouldn’t admit that... I came to Firefly late, and had to watch it on Netflix because I missed it when it was on TV, but I did enjoy it. My original high concept pitch for Fortune’s Hero was “Firefly with sex – for all the people who wanted Mal and Inara to get together.”

I’m above all else a reader, though. And I read pretty widely, so I have a broad but shallow base. In other words, I haven’t read a whole lot of science fiction. A few of the classics, like ENDER’S GAME and that book about the rabbits. Some Darkover stuff, back in the old days. I adore Linnea Sinclair, but I can’t write the way she does; it’s much too technical for me. My favorite book of hers is probably HOPE’S FOLLY because it’s such a nice, tight mystery—but my favorite romance is Sass and Branden Kel-Paten in GAMES OF COMMAND. A very close second would be Trilby and Rhis in FINDERS, KEEPERS.

One of my favorite authors in the whole world just so happens to write science fiction along with fantasy. Lois McMaster Bujold is a genius, and if I can grow up to be half the writer she is, I’ll be a very happy girl. Her Vorkosigan Saga is brilliant, and the first, SHARDS OF HONOR is one of my favorite books of all time. So, incidentally, is THE CURSE OF CHALION, which isn’t science fiction at all, but fantasy. However, Quinn owes quite a lot to Cazaril, just about as much as he owes to Miles Vorkosigan, I’d say.

JB: I’m all over the place. My website is www.jennabennett.com
I’m on Facebook as @Bennett_Jenna as well as @JennieBentley
The two of me share a Facebook page, which is here: https://www.facebook.com/pages/Jenna-Bennett-Jennie-Bentley/192400104127600
And I do have a blog, but I don’t use it much. However, you can find it at www.jenniebentley.blogspot.com

Ms. Bennett, thanks for your time, and for your art.