Sci-Fi Romance Film On The Horizon: UPSIDE DOWN


The other day, just for the heck of it, I typed “science fiction romance” into YouTube. Something interesting turned up at the top of the list: a trailer for a film called UPSIDE DOWN. 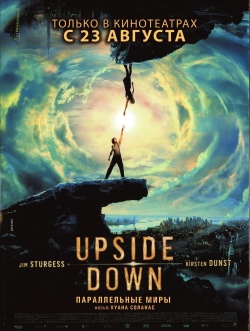 According to the film’s Wikipedia entry,


Upside Down is a 2012 French-Canadian romantic fantasy film written and directed by Juan Diego Solanas. Starring Jim Sturgess and Kirsten Dunst, the film is about a man searching an alternate universe for a long-lost love from his youth. The film was released on 23 August 2012 in Russia.


The premise is quite fantastical so I can understand the “romantic fantasy film” tag. I couldn’t figure out why the film turned up in a search for SFR, though—not that I’m complaining! Maybe the reason for the alternate universes has some sort of scientific basis and is explained in the story. It’d be nice if the opposite worlds element was more than just a gimmick.

Based on the trailer, it seems like the romance *is* the plot, with a forbidden love/Romeo and Juliet angle. I’d venture to say UPSIDE DOWN is tailor made for sci-fi romance fans who lean toward heavy romance elements.

I wonder if the film (especially its visuals) will warrant a trip to the theater for me. I have a nice system at home, but I also like the idea of supporting science fiction romance films during their theatrical runs. Decisions, decisions.

The IMDB entry states that UPSIDE DOWN will release in the U.S. on March 15, 2013. For the sake of future SFR stories in film, I hope it performs well.

What are your thoughts about the trailer? Think you might check out the film?