There's Something About "Amber"

"Amber" must be the new sci-fi romance buzz word for 2013. First up, Cathy Pegau's CAUGHT IN AMBER, which releases January 28 from Carina Press:

Recently out of rehab, Sasha James is determined to keep her head down, complete her parole and never touch amber again. The chip in her neck controls her cravings for the highly addictive drug, but also tracks her every move. Not that she goes anywhere other than work and the halfway house she calls home--a far cry from her luxurious former life as lover of the mining colony's top drug dealer, Guy Christiansen.

Agent Nathan Sterling has no desire to see Sasha fall back into amber, but his sister has become Guy's latest conquest and the unexpectedly attractive Sasha is the key to getting her back. So in exchange for an introduction, he offers Sasha the one thing she can't refuse--her freedom. From the chip, her parole and even the planet if she wants. Though he would be sorry to see her go...
Torn between her growing attraction to Nathan, fear of Guy and the allure of amber, Sasha accepts. But who will save her if Guy refuses to let her go a second time? 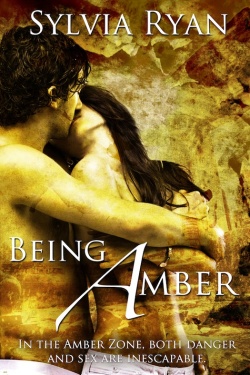 Jaci Harmon was born a Sapphire, but after she’s summoned to receive her final designation, the testing reveals she carries a gene slated for eradication. Within a day, she’s sterilized and dumped in the Amber Zone, where the damaged are corralled away from the rest of New Atlanta. Scared and alone, Jaci would rather die than face her future as an Amber.


Born in the Amber Zone, Xander Dimos is a product of a lifetime spent under the oppression of the Repopulation Laws. Decades of suffering have taught the Ambers to make the zone a place where touch, sex, and unconditional acceptance ease the pain of their fate. Jaci has a lot to learn about her new home, and it’s Xanderís responsibility to guide her through the differences and the dangers safely.
With the simmering undercurrents of sexual chemistry growing between them, and in the midst of discovering the Gov’s true motives, Jaci and Xander must overcome his secret and accept their love as undeniable…even if the time allotted to share it is short.


Seriously, did anyone think I wasn't going to blog about these titles in the same post?! LOL!

Joyfully yours in all things amber,