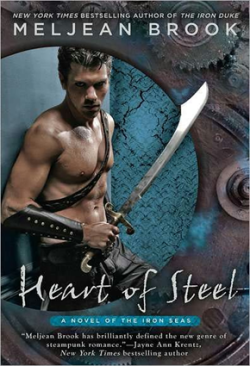 I finally found a library copy of Meljean Brook’s HEART OF STEEL, book two in her Iron Seas series. (This title was published in 2011. Oh, the life of a budget-conscious genre fan!)

As I was reading, some of the story elements jumped out at me, but I wasn’t sure why. At first, I thought it was simply because I’m a fan of Alpha heroines being paired with heroes who don’t overshadow them, a dynamic which HEART OF STEEL was delivering (yay!). Then I thought it could also be the intrigue of the airship pirate heroine (double yay!). But the answer didn’t crystalize until I had finished the book.

It was a sense of validation, both as a reader and an author. As a reader, HEART OF STEEL was giving me one of the romance tropes I enjoy, as noted above. I appreciate Ms. Brook’s taking a risk because there are many readers who would find Yasmeen unlikeable/too strong/too cold. Alpha anti-heroines are by no means popular. But for me she’s just right. Score one for the hardcore niche readers!

As an unknown author (I’m just keepin’ it real!), HEART OF STEEL represented validation of a slightly different kind. You see, I discovered some general similarities between that book and ONCE UPON A TIME IN SPACE (2011), my space opera sci-fi romance. And by similarities I mean the idea of two authors tapping into the general Jungian well of creative ideas. We were not the first to write such characters/plots, nor will we be the last. But a few interesting coincidences made me feel extra confident about my choice of characters and tropes for ONCE UPON A TIME IN SPACE. In other words, if bestselling, multi-published author Meljean Brook is doing it, it must be acceptable. Right?


Which, of course, brings up the issue of whether digital-first science fiction romances should be measured against their mainstream print sisters. Or whether books should be judged based on medium, author visibility, marketing budget, and other factors rather than on their own merit.

Many coincidental similarities exist in stories between the two groups and it doesn’t mean a digital-first book’s value increases in quality because of it. But it also doesn’t mean a digital-first book is of automatically inferior quality because of the medium. Don’t even get me started on how Cathy Pegau’s CAUGHT IN AMBER easily matches the quality of its equivalent in mainstream print books. EASILY! Seriously, don’t get me started.

Anyhoo, let’s take a (admittedly self-indulgent on my part) look at the similarities (perceived by me and of course totally subjective) between HEART OF STEEL and ONCE UPON A TIME IN SPACE.

Spoiler Alert: This post contains spoilers. A few are significant enough that if you want to read either book without them then I suggest avoiding this post.

May I suggest two alternatives? At Spacefreighters Lounge, Laurie A. Green has a thoughtful post about Short Stories That Expand Universes (a great one for John Scalzi fans!). Or you can check out Pippa Jay’s post on Appealing Aliens. 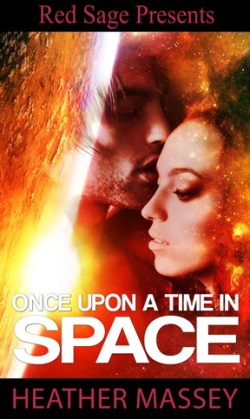 In both books, the heroine is Alpha, an anti-heroine, and kick-ass

In both books, the hero is a mix of Alpha and Beta. Neither one feels threatened by the heroine’s agency and power; in fact, they cherish it.

In both books, the heroes meet the heroines’ emotional needs, which is just as important to the heroines as, say, physical protection.

I realize some folks will think I’ve been pouring too much crazy sauce on my tacos or whatever, and that’s okay, but I never expected to encounter the above details in HEART OF STEEL. Pretty much everything else about the two books are wildly different. All I can say is it was a surreal experience reading a story with some of my favorite character tropes in light of the fact that I used some of the very same ones in a sci-fi romance of my own. What can I say—to me, they’ll never get old.

I’ll say the next observation so no one else has to: When it comes to having mainstream punch, Heather Massey is no Meljean Brook. But this isn’t about my status as an author so much as it’s about tagging various science fiction romances. For example, like my previous post called If You Like Suzanne Brockmann’s BORN TO DARKNESS. There are extremely few current SFR mainstream print releases, so it’s a way to help readers find similar stories in the digital-first realm.

I guess I just worry about the perception that digital and print are worlds apart when in fact they are more like adjoining cities. Or next-door neighbors in some cases. Therefore, as I discover examples to demonstrate that point, I will blog about them. Color me a devoted sci-fi romance fan!