UPSIDE DOWN: Dead On Arrival? 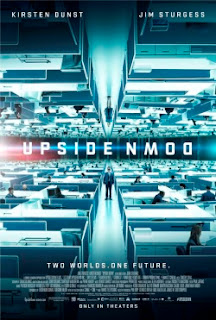 I’m feeling bummed about the conclusions Charlie Jane Anders reached in her io9 article about the film UPSIDE DOWN (2013). In Why is it so hard to create a good science fiction movie romance? she outlines a number of reasons the film didn’t work for her as far as the integration of SF and romance elements (she strove to avoid spoilers in the article). Given the gimmick-prone setting I had doubts about the quality of UPSIDE DOWN and Ms. Anders pretty much confirmed them.

She raises a number of compelling points about how the film could have been stronger. In the grand scheme of things, it’s not a huge deal, but since I’m deeply invested in SFR it’s always a shame when a film or TV show can’t move the subgenre forward in any way. When a film like UPSIDE DOWN isn’t well received, I worry about it eroding future interest in SFR.

Reading the article made me wonder if writer-director Juan Solanas was more enamored of the worldbuilding than the characters and romance. Quite a few films (at least in my viewing experience) emphasize visuals over plot. I can’t help but wonder if that’s the case with UPSIDE DOWN:

Every time it seems like your characters might start developing a life of their own, crush them under more random plot wheeling and implausible ideas. Remember, if it's ever a choice between developing the characters and developing the world, always develop the world.

If the characterization in UPSIDE DOWN suffers—and by extension the romance—then how can it do the job of appealing to both romance fans as well as those who have only a casual interest in romance stories? A good SFR or romantic SF film needs strong crossover appeal in order to make a positive impact.

I still plan to see the film but will definitely wait until I can watch it at home. What about you? What advice would you give to a filmmaker about how to create a successful SFR film?