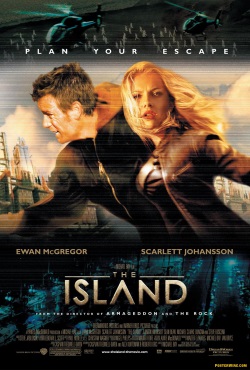 It was a dark and sweaty night. There I was, slaving over my work in progress and dripping onto the keyboard, when my husband lured me to bed with the siren song I can never resist: “Come to bed, Diane Dooley. I’ve found a science fiction romance movie for you.” Oh, how I love that man o’ mine!

Soon I was ensconced in the delightful chill of the bedroom air conditioner, agog as the opening credits for THE ISLAND rolled. The name Michael Bay appeared. Uh oh. I don’t watch his movies because they’re boring and too noisy. “Be patient,” said my husband. He’d watched a chunk of the movie to make sure it wasn’t just loud explosions. I wasn’t too convinced, but the air conditioner had seduced me, so I decided to stay for the long haul. I’m glad I did, though it was a very long haul indeed. I’m glad I watched it lying down. My ass would not have been happy to see it in a cinema.


The film has three distinct parts. The first act was my favorite. Ewan McGregor and Scarlett Johansson star as Lincoln Six Echo and Jordan Two Delta respectively. They, along with many others, live in a sterile indoor futuristic community. They all dress the same, have boring assigned jobs, and live regimented lives, unable to go outside due to a polluted environment.

They all long to win the lottery, which involves them being moved to ‘The Island,’ the only spot left on Earth that is free from contamination. Lincoln, unlike the others, is a very curious type, prone to wandering and exploring. On one of these secretive excursions he discovers things that turn his whole world upside down. Soon, he and and Jordan are escaping the community, seeking the truth to their existences and running for their very lives. 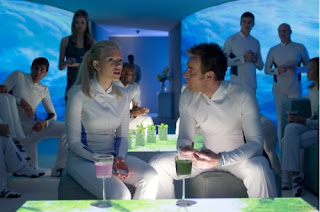 The second act is more typical Michael Bay with lots of high octane action and chase scenes. Typically, I’d be yawning in boredom. But get this--I found some of them absolutely enthralling! I think it was because the slower-paced first act allowed me to get to know and care about the characters who were now in such great danger. I was pulling for people I’d become deeply invested in and it really felt like they were in terrible danger and, oh, the bad guys are gonna catch them or kill them, oh noes!

One action scene in particular, involving a huge truck hauling giant metal wheels, was utterly thrilling, beautifully choreographed, enacted, filmed, and edited. It had me on the edge of my bed, I tell ya. Kudos to Bay and his outstanding team. I’ve gone to Youtube and watched the scene again several times. It’s a work of art, in my opinion.

Of course, the action scenes had to go on for far too long. *sigh* I personally would have cut a few and instead used the money to hire a kickass female science fiction writer to plump up Johansson’s role and dialogue. The third act melds the scifi and the action quite well, and sees McGregor really showing off his acting chops. I loved him in this film, but Johansson really deserved a bit more to do. She was great with what she was given; I just felt she was more than a little overshadowed by McGregor in the final section. 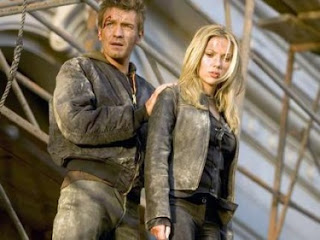 I highly recommend this film for science fiction romance fans. It wasn’t the most original film ever made; I got little mini-flashbacks to Gattaca, Logan’s Run, Blade Runner, and The Lottery, but it seemed more like respectful nods than it did stealing. The romance between the two main characters totally worked for me. I fell in love with them both; I really wanted that happy ending for them.

Their romance was very slow-paced. In the beginning they are friends who seek each other out for the sheer pleasure of one another’s company; later they are comrades, watching each other’s back and keeping the other going. Their relationship had a warmth and a kindness to it that I loved. It was very much the friends-to-lovers trope, which doesn’t usually work for me, but I adored it in this film. When Lincoln Six Echo and Jordan Two Delta finally kiss, it’s one of the clumsiest, cutest, sweetest, most sincere kisses I’ve ever seen on the screen. I smiled. I sighed. I was happy.

The supporting cast was excellent, the set design, the stunts, the CGI, everything--it really is worth a look, even if it isn’t perfect. But remember, it’s long. Grab your sweetie and a comfy couch or bed. Organize some cold drinks and tasty snacks. For those with a long attention span and a love of science fiction romance, this might be the perfect date movie. Never thought I’d say that about a Michael Bay movie! *grin*

Seen the movie? Loved it? Hated it? Emitting a mighty “meh?” Feel free to opine in comments.

Diane Dooley is the author of Blue Galaxy and Blue Nebula from Carina Press, Mako’s Bounty from Decadent Publishing, and That Night from Wild Rose Press. She writes horror, science fiction, and romance; short stories, novellas, and novels. She also Facebooks, blogs and tweets.