Yay, science fiction romance is finally getting more biopunk! Makes me delighted when authors answer my prayers, even if they weren't exactly planning on it, LOL! 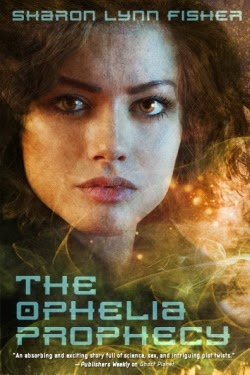 Sharon Lynn Fisher (you know her from GHOST PLANET) has a forthcoming release called THE OPHELIA PROPHECY (Tor/Macmillan). It's a post-apocalyptic biopunk SFR and will hit shelves in April 2014.

I've got a freshly-minted cover to share with you, along with the blurb and a meaty excerpt I'm cross-posting from the author's site. For more information, including pre-order links, visit the author's announcement post.

Our world is no longer our own.

We engineered a race of superior fighters - the Manti, mutant humans with insect-like abilities. Twenty-five years ago they all but destroyed us.

In Sanctuary, some of us survive. Eking out our existence. Clinging to the past.

Some of us intend to do more than survive.
Asha and Pax - strangers and enemies - find themselves stranded together on the border of the last human city, neither with a memory of how they got there.

Water pooled around Asha’s hips, soaking her thin cotton dress. She studied the glimmering surface of the lake, and the rocky hillside looming on the opposite side.

The reservoir. How did I get here?

Closing her eyes, she pressed her fingers to her temples. The last thing she remembered was climbing to the roof of the Archive with her father. It was a beautiful spring evening, and they’d planned to picnic and watch the sunset. She’d stepped off the ladder onto the corrugated, whitewashed metal, and then...

She grasped at the words as they breezed across her consciousness. They had the ring of command, yet she had no memory of who had spoken them, or why.

A masculine moan sounded, so close she rolled into a crouch and skittered into the shallow water. The lithe movement of her own body surprised her almost as much as the unexpected voice.

Just beyond the depression she’d left on the beach, a naked form stirred. A stranger. His gaze riveted on her. He sat up straight, fists digging into the sand. No, not sand. His body rested on a bed of some soft, fibrous material.

She remembered the flimsy dress—now wet and clinging to her body—and hugged her bent legs, concealing herself as best she could. Her heart pounded against her thighs.

“Who are you?” they both demanded.

So the confusion was mutual.

“You first,” he said. A command, not a courtesy.

She hesitated. The man now seemed familiar—something about the eyes. They curved down at the inside corners, making them appear to slant under his dark, arched eyebrows. But she couldn’t place him.

He rose to a crouch, eyes moving over her like an extension of his arms, prying at the locked arms that concealed her body from him.

She reached up to release the clip that held her coiled hair to the back of her head, thinking she would cover herself with it. She gasped to discover her heavy tresses were gone.

Tears of confusion welled in her eyes. Fear knotted her stomach.

“What’s your name?” the stranger insisted.

“Asha,” she whispered, uncertain. There’d been another name a moment ago. A name that had seemed to mean something.

Her throat tightened, strangling her words, as she said, “I don’t understand.”

“What are you doing here?”

She raised her eyes to his face, shrinking from the heat of his gaze. “I don’t know.”

His eyes bored into hers, probing for the thoughts behind them. He frowned, brow furrowing with doubt. He doesn’t believe me.

“Who are you?” she repeated, indignation nudging past the fear that gripped her.

He slid his hands up his shoulders to rub his neck, baring the hard lines of his stomach, revealing pale marks under either side of his rib cage. Scars.

“Paxton,” he said. One hand moved to the back of his head, and he winced. He probed the sore spot with his fingers.

He raised an eyebrow. “I don’t know.”

She glanced again at the fibrous nest. “What’s that?”

She blinked at him, no more enlightened than before. Before she could question him further, he rose to his feet, scanning the horizon. Her eyes lingered on the marks below his ribs.

He stood so long—motionless and studying the edge of the sky—she began to think he’d forgotten her.

His composure was troubling. There was a shared mystery here, clearly, but they were not equal participants.

“How can you be so calm?” she asked, voice lifting with anxiety. “Do you know something I don’t? Has this kind of thing happened to you before?”

Paxton glanced down at the nest. “Yes.”

She waited for him to explain, but the low whine of an approaching ship changed the subject. Panic jolted her as the black beetle hummed into view, dragging its own reflection across the surface of the lake.

She sprang to her feet. “That’s an enemy ship!”

The war was over, but the Manti ruled the air, still keeping tabs on the last dregs of humanity. Citizens of Sanctuary were forbidden to wander away from the city—and the reservoir marked the boundary.

“We need to go!” she cried.
Again his eyes skewered her to the spot. “No need. That’s my ship.”

And then suddenly she did. She sidestepped a couple meters down the beach, gaze flitting between ship and enemy.

Overhead, the beetle whirred to rest, cupped wings lifting to allow a controlled vertical landing. With a series of loud clicks it nestled into the sand, hover gear lowering and locking back against the hull. The skin of the vessel was lusterless and black—a secreted resin that looked like rubber. She watched the hull lighten from jet to blond, until it was almost invisible against the sand.

“Pax, you okay?” The feminine voice came from the ship.

Paxton frowned at Asha. “I was hoping you could tell me.”

Pax could see the woman was ready to bolt. He could feel it.

She was a wisp of a girl. Narrow shoulders. Graceful limbs. Cropped brown hair—unruly except where it was tucked behind her ears—and round eyes the color of coffee beans. Despite her fair complexion, sun exposure had stained her arms and shoulders a light copper. His eyes explored the curve and swell of flesh exposed by the threadbare dress. His fingers twitched at his hips.

“Whoever she is,” his pilot continued over the com, “I can smell from here she’s scared half to death.”

“Lord of the goddamn flies, Pax, you’re not thinking of bringing her on board.”

“Because obviously it’s a trap. Your carapace was activated. Something went wrong down there.”

“Obviously,” he said, rubbing at the knot on the back of his head. He stared at the woman, and she took another step back. “But short of exploding, I'm not sure what she can do to us.”

He gave a groan of impatience. “Banshee can scan her for internal com or explosive devices. Besides that, she might have the answers I don’t, so drop the fucking ramp, Iris, because this is no place to be arguing about this.”

The ship’s boarding ramp opened with a thunk and lowered to the sand.

He took a step toward Asha and held out his hand. “I’m not going to hurt you.”

She stared like he was a snake. Her gaze drifted for the third time to the scars on his abdomen. Something prickly and unpleasant rolled in his stomach.

“Come with me,” he ordered.

Like hell, was the reply conveyed by her expression.

No time for this. Pax lunged for her.

A moment later he was flat on his back, staring at blue sky, trying to reactivate his diaphragm.

Debajo fronted as a bar, but pretty much everyone in Granada knew they offered something much more interesting than alcohol—an illicit, synthetically produced, highly addictive compound inspired by flowers of the Central American cloud forests. The flowers were basically opium dens for a specific type of insect. They addicted their guests, who remained inside until the flowers withered and dropped. At that point the bugs stumbled out with massive hangovers and immediately went in search of their next fix, pollinating in the process.

The patrons of Debajo stumbled out and started fanatical religious movements.

As Pax and Iris wended their way toward the heart of the Albazyn, the activity level in the streets increased. The colorful umbrellas were folding now with dusk coming on, but market day typically wound up rather than down. The street merchants carted off their wares, making way for evening strollers, and shops and restaurants would stay open until the wee hours. When there was mischief in the Albazyn, which was becoming a more frequent occurrence, it typically started the evening of market day.

Thunder rumbled in the distance as Iris stopped next to a stall with a powder blue umbrella. The vendor—whose clear, silver-veined wings drooped down his back like a cape—was boxing up his selection of masks. Stunted antennae barely protruded above curls the same silver of his wings.

Most of his masks were ceramic and intricately painted, with multicolored ribbons for hair, but Iris chose simple eye masks, one teal and one purple. She turned out the spiral marking on her wrist, and the man opened a huge paper ledger and copied the mark into it with an artistic flair—quaintly old fashioned, eccentric and possibly superstitious, but also a lucky turn. It meant the purchase hadn’t gone immediately into a database, which would call attention to their location if anyone decided to go looking for them.

Iris handed Pax a teal mask and he pulled it over his head, waiting while she fidgeted to adjust hers over her broader face and then struggled with the clasp. Finally he reached up and hooked it for her.

“Let’s go,” he muttered, taking her arm. “I don’t like that you’ve sent Asha off to this den of iniquity.”