What better way to finish off 2013 than with a science fiction romance giveaway?

Author Yolanda Sfetsos came aboard with her three Recast titles (Samhain Publishing) and we'll give away a digital copy of each novella-length story to one lucky passenger!

To enter, leave a comment by making a word from "science fiction romance."

Enjoy the covers and blurbs! Clicking on the title will bring you to the book's Samhain Publishing page so you can read an excerpt. 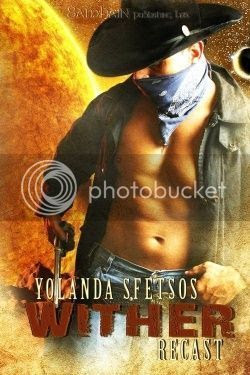 Wrangling is in Colt Marshall’s blood. He was known across the galaxy for his skill at roping horses and cattle, but found that the woman he loved wasn’t so easy to tie down. Now a mysterious client has him wrangling a man who may or may not be fully human. Colt doesn’t know and doesn’t care, as long as he gets paid. Until his pursuit of the escaped captive lands him on his former lover’s planet…and her request for help threatens to crack the armor around his heart.

With Colt’s unexpected arrival, Brynn Wright’s problems could be solved…or multiplied a thousandfold. She doesn’t expect him to understand why she left him, but she sure could use his help ridding her planet of the feral creatures terrorizing her town every night. It doesn’t help that he looks just as good as she remembers. Or that even after five years, their mutual lust is very much alive.

Their desire rivals the heat of the planet’s skin-peeling sun, stripping away layers of secrets to expose the truth. And a secret that could be their death sentence…

Warning: This book contains a space cowboy with an attitude, a female sheriff with a kick-ass past, an AI dressed like a deputy, feral creatures, and a planet scorched by its proximity to the sun—but still not as hot as the cowboy and sheriff are for each other. 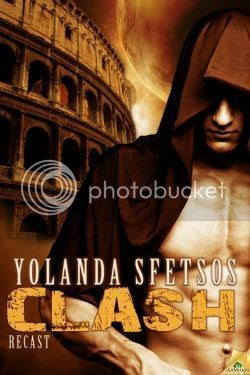 Ely’Shea longs for the freedom Jenks stole from her. She’s his right-hand
woman, but when the boss is away she steps out of her enforcer role and ducks into a remote bar to indulge her passion: singing onstage. The night she catches a glimpse of an alluring cowboy in the audience, he ignites a spark inside her she never thought she’d feel again.

Warning: This book contains a very lonely shapeshifter in need of some loving, a kick-ass singer leading a double life, a serious case of mutual lust, an arena filled with enslaved warriors, and so many secrets it can only end in total madness. 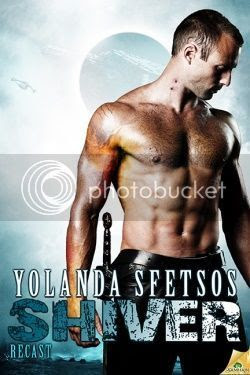 Blood made him a monster. Passion could be his salvation.

After narrowly escaping brutal captivity in the Clash Arena and the bite of a bloodsucking creature, all Eniell Knox wants is to get off the crappy planet that ruined his life. When he steals an abandoned ship and is shot down over freezing northern Fray, he finds nothing but more trouble. An alluring young woman who stirs his hunger—and her shackle-happy mother—could push him over the edge.

Day after day, Lian Shan lives like a prisoner, fending off a parade of creepy potential husbands her mother tries to force upon her. She longs to experience life outside the confines of her ice castle and meet the man whose face haunts her dreams.

When a handsome, mysterious man crashes onto the estate her world breaks apart, spilling unfathomable secrets. Some of them her own.

Though Eniell and Lian’s mutual attraction explodes off any known star chart, there’s something her dreams left out—he’s been bitten by a monster. Which means if he turns into one, the first thing on his menu could be her neck…

Warnings: This book contains shared temptation hot enough to melt ice caps, a warrior with a blood craving, a rebellious heroine who isn’t afraid to share hers, and the galaxy’s most dysfunctional family.