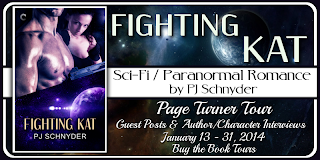 Y'all know how much I love Boggle, a character from PJ Schnyder's HUNTING KAT (Carina Press). It's love, I tell you. Can't get enough of the guy. Well, I learned he's going to make an appearance in the author's latest Triton Experiment novel, FIGHTING KAT!


However, I will restrain myself from squeeing anew about Boggle so I can present a guest post by PJ Schnyder as part of her "Fighting Kat Page Turning Tour." After all, her new book also includes fun stuff like a shape-shifting heroine, a soldier hero, action-adventure, a rescue mission, and, of course, an appearance by the one and only Boggle! Woo-hoo! (Look, I tried really hard, okay?!)

Here's the cover and blurb for FIGHTING KAT: 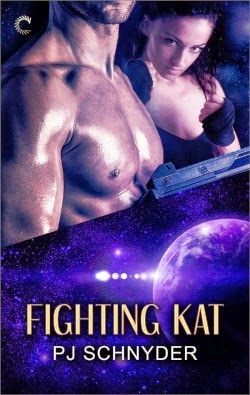 Book two of The Triton Experiment

Intergalactic mercenary Kat Darah has been ordered to keep her shape-shifting ability a secret from everyone but those closest to her, for her own safety. She’s learned how to control the feral rage…for the most part. But when Lieutenant Rygard’s military unit goes missing, she’ll use every skill she has to find her man.

Lt. Christopher Rygard has witnessed his girl shift, and he still wants her. After Kat rescues him from alien clutches, he’d like nothing more than to wrap her in his arms again, but his first duty is to his men. And half of them have been shipped off-planet to be sold as slaves.

Kat and Rygard will need to form a new team to go deep undercover, posing as gladiators and learning to fight together in order to survive. In the arena, it’s all about who is the strongest predator…

See how it all began in Hunting Kat.


Click here to read an excerpt of FIGHTING KAT and for details about the author's swag giveaway!

Worlds within Worlds and Fighting Kat

A part of the adventure in writing science fiction romance is building a universe with countless worlds. And within those worlds are characters.

People just like me.  People who use public transit because it makes sense, even if their public transit is a space ship. Who randomly stroll through the park after work because it was a long week, even if that park is contained within a dome of a lunar space station. Who can't wait to have a drink with some friends at Syn's bar on Dysnomia Station. People, being people, regardless of what solar system they live in or what planet their species came from.

And yet, they're different too. Their origins and beliefs, the environments that shaped who they are, the cultures in which they were nurtured.

Kaitlyn was raised in a very human environment, one we're familiar with in many ways. She lived with her parents, attended school, had plans for university. The incident on Triton Moon Base changed her life forever.

But I learned a lot about each of them when I sent them into the arenas and forced them to fight. And they learned about each other. The arenas became a crucible and they were not the same when they emerged.

Play find the PJ around the Internetz: