Interview With TO BE SINCLAIR Author Eva Caye 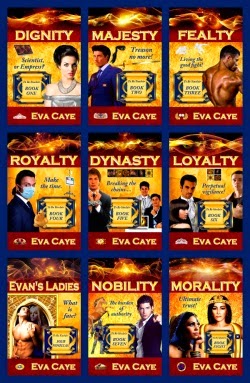 Author Eva Caye's To Be Sinclair saga has reached its finale with the release of MORALITY, the eighth book in her futuristic royalty-in-space series of sci-fi romances. Given the occasional lament that SFR lacks enough novel-length stories, I saw this as an opportunity to connect readers with the work of an author who's been contributing exactly that kind of content to the genre. Therefore, Eva Caye is aboard to tell us more about her epic series!

The Galaxy Express: What was the initial inspiration for your To Be Sinclair series?

Eva Caye: I wrote Dignity to deal with my depression.  I took the person I was (overstrung alpha, forced to make judgments every day) and began having conversations with the person I wanted to be (student of science, focused on learning how to get things done).  The pressure of those internal dialogues was so great, I began writing them down, and they developed into characters. By the time I had completed the rough draft of book one, I knew essentially what the entire series would be like.

TGE: What kind of setting can readers expect from the books?


EC: The To Be Sinclair series consists of a ruling family who cares about the lives of their subjects; they work hard, take responsibility, and anticipate the needs of their society.  In other words, the Sinclairs are genuine, loving, brilliant, and thoughtful, acting for the betterment of their people, virtually the opposite of every politician and government currently on Earth! 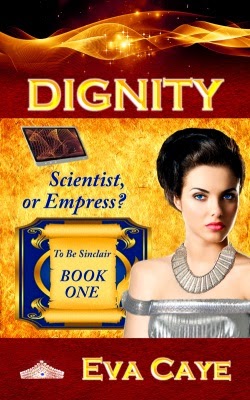 TGE: Does each book stand alone or is there an overarching plot?

EC: They are best grouped as companion volumes. The overarching plot is stargates, ‘stelluric’ science, but each two books are philosophically bound.

Dignity and Majesty cover the romance of the Empress and Emperor, as well as the Empress’ development of stargates.  Fealty and Royalty cover the duties as well as the personal sides of their first two sons, destined to be politicians.  Dynasty and Loyalty are over six siblings who will carry on the Empress’ stargate legacy, as well as the security involved in being members of the Imperial Family.  Nobility and Morality are about the two most important grandchildren, the one who will be Emperor of his generation, and the cousin who will be his greatest support.

I do have an extra book of four novellas, laughingly referred to as ‘book 6.5’.  Evan’s Ladies is about the problems the youngest Imperial Son has in finding a lady, and it is my editor’s favorite for its heart-wrenching travails. 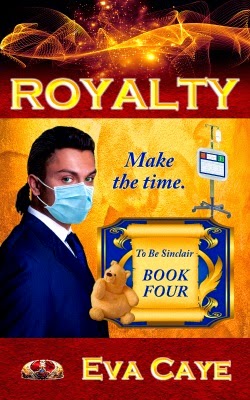 TGE: Who are a few of the heroes and heroines readers will meet?

Empress Felice is the star of the series, the most important person in the galaxy, so each character revolves around her in some way.  Emperor Victor Sinclair is dominant in the largely behind-the-scenes politics, so I show his involvement in his family more than anything.  ‘Pizazz’ could be Crown Prince Zhaiden’s middle name, while his brother Phillip is his right-hand man.  Princess Anne is declared the most intelligent person on the planet, but sees more than her fair share of pain, so the younger siblings tend to revolve around her.  Of the grandchildren, Prince Matthieu and Princess Grace are very complex characters, for all that they are next to godlike in their zeal to perfect themselves.

TGE: Describe a few of the underlying themes explored by the various books.

EC: A science too dangerous to be allowed to be known, yet too valuable to hide; depression as an inherited disease; the security needed by important people on an everyday basis; being raised in a family known for ‘forward-thinking’, where achievement is assumed of you; finding the right person with whom to share your life when you are surrounded by people who have no idea what your life is actually like; finding friends you can trust with your life itself. 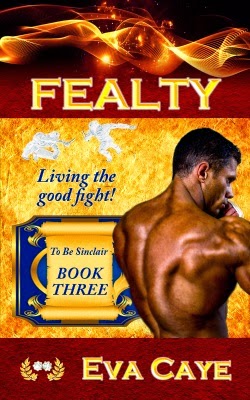 TGE: What can readers expect in terms of heat level?

EC: I describe sexual encounters explicitly, but briefly and, ah, scientifically, and usually not more than to make a plot point.  Almost all the sex is implied, but I do have at least one fairly explicit sex scene in each book, and always to make a point, such as to cement the relationship.

TGE: What's been the most rewarding about self-publishing? The most challenging?

EC: I love having complete control over my work!  Why should I cut scenes just to keep the manuscript under a certain number of pages?  In truth, my writing is so spartan I have to go back and add embellishments.  I had Dynasty out for three weeks before I realized it needed an emotional reaction by the Imperial Sons to the climax!

TGE: Where can readers find your books?

EC: Amazon, OmniLit, AllRomance, Smashwords, Payhip.  All but Morality are available through CreateSpace, too.

TGE: What's next for Eva Caye?

EC: I have two prequels to the series over half-finished; they are both about 450 years before the series, some 150 years in our future.  One is about the society founded by scientists on Corona Segundus, and the other is the founding of Sinclair Demesne.  My third work-in-progress is about a lady dealing with the official formation of a telepathic guild, as well as a godlike alien.

EC: I’m on Facebook every day -- eva.caye for my personal account -- and I do remember to tweet on occasion.  You can find a lot of information, as well as ways to reach me, on my Amazon Author Page and my website, but I can always be reached via email, which I include in every book.  Write me; I’ll write you back! 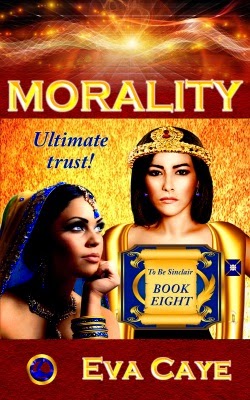 What can jolt an 18-year-old Princess from her worries about her sex life? Her training in Grandmother’s secret stelluric science, of course!

Daughter of the most brilliant scientist on the planet, Princess Grace Encino-Sinclair fights to have a private life, quite difficult to achieve since she has been trained to so many Imperial secrets. Her relentless duties become a never-ending scramble to meet Imperial demands by using her scientific and political knowledge, as well as her consummate social skills. When the most unthinkable assassination of all occurs and everything goes downhill from there, Grace suddenly finds herself the most highly trusted person in the Empire, the power behind the Imperial throne….

Discover the power of ladies as the backbone of Demesne society in this novel of social intrigues, ethics, and justice, as Princess Grace defines the true meaning of morality! 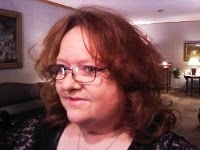 Ms. Caye, thanks so much for your art, and for your time.