Tags For A Post-Apocalyptic SFR: NIGHT WHISPERS By Alisha Rai 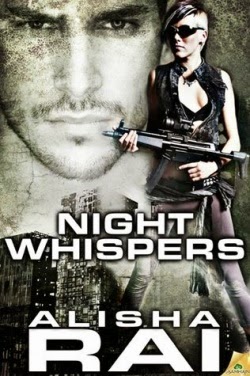 Alisha Rai's NIGHT WHISPERS (Shadowlands #1; Samhain Publishing) is one of those books that straddles the fence between PNR and SFR. One reason is its near-future, post-apocalyptic setting. Another is the premise: a plague called the "Illness" has swept across the globe and renders victims--"Shadows"--into mindless zombies who feed on human blood in a vampire-like fashion. When humans weren't attacked by Shadows, they fell victim to nuclear attacks and a general infrastructure collapse.

I wasn't quite clear regarding how the plague started or why and I would have been interested in learning more. Who created the Illness and for what reason? How would the good gals and guys defeat it (presumably in future books)? The vagueness might even have been intentional, either to purposefully straddle the genre fence and/or to save the explanation for a future book.

Despite some ambiguities, I feel NIGHT WHISPERS nudges closer to SFR given the presence of secondary scientist characters, references to experiments, and various gadgets. Until I learn the Illness has supernatural origins, that's my speculation and I'm sticking to it!

I'm going to provide a few more non-spoiler tags so you can decide if NIGHT WHISPERS is up your alley, but first, here's the blurb:

Product Warnings
Contains a hero who would fight monsters for his love, a heroine out to save the world, a treacherous wasteland, poetry as foreplay and flesh-eating enemies.

NIGHT WHISPERS features a nerdy Beta hero with a secret. James Bennett works in an underground military refuge as an analyst and he's in charge of several search-and-rescue agents. Heroine Jules Guerrero is a former gang member and drug abuser. She's one of James' agents and has a mean set of combat and survival skills.

There are action scenes interspersed throughout the story. I'd characterize them as moderate with a touch of grisly. In between, the romance builds in part with lots of introspection and quite a bit of angst. Their romance is one of friends-to-lovers.

Despite the presence of blood-sucking plague zombies, the overall tone of the book is gentle/sweet. The love scenes sizzle tastefully and don't overwhelm the plot (not by a long shot).

Action-adventure would also apply to this story. There's also an ensemble cast featuring interesting secondary characters. In places, there's a strong sense of family/community as many people in this world have had to establish new bonds to replace ones lost from the catastrophic events.

One of the most notable aspects of NIGHT WHISPERS for me is one particular act of heroism on Jule's part (which I'm not going to spoil!). I will say that while reading the scene, I was immensely worried the story would pull back right when I was hoping the heroine would do exactly what the scene required (because otherwise she would have been Too Stupid To Live). The scene was gritty and messy, but absolutely necessary. I'll admit, I performed a mental cheer as it played out to my expectations. It made for a satisfying reading experience and reinforced my interest in SFR.

Interestingly, the reader is pointedly assured by the text that Jule's action was justified. Personally, I felt it was obvious from the context, but upon further reflection I can see how the passage could serve as a sort of guide post to ease the SFR learning curve. Meaning, the message to the reader is "Here's how to interpret the actions of this type of heroine in case you haven't encountered someone like Jules before. Rest assured, she's still likeable!" Jules was likeable from the beginning, so for me her every action was clearly heroic. Yet this one scene involves an act that's usually reserved for heroes, so for some readers it might take some getting used to. Still, NIGHT WHISPERS would be a good place to start if you want a relatively gentle introduction to heroines who are allowed to take care of business.

"Shadowlands #1" indicates that NIGHT WHISPERS is meant to be the start of a series, but it works fine as a standalone. I reached out to Alisha Rai about future books, and she said in an email that she does "…have plans to continue the series."

To learn more about the author, visit her Web site, follow her on Twitter (@AlishaRai), and read her posts at Scribbling Ninjas.