Knowing my interest in science fiction romance, a friend tipped me off that a film called CODEPENDENT LESBIAN SPACE ALIEN SEEKS SAME (2011) had just landed on Netflix. He said little more other than that the film was shot in the style of '50s pulp SF movies. I was like, "Okay, sure! I'll check it out."

That night, though I should have been getting ready for bed, I figured I'd watch a few minutes of the film. I didn't Google the title, read the description, or research it in any way. I simply pulled it up on Netflix. The poster definitely promised a campy parody of some kind: 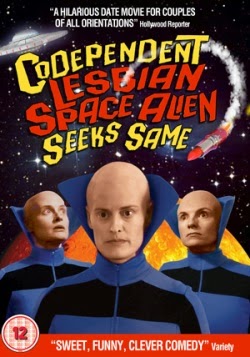 Other than that, I had no idea what to expect. But I started watching it anyway because, you know, lesbian sci-fi romance! I hedged my bets, though, because with an unknown film it's safer to expect nothing regarding an upbeat ending.

I only meant to view about twenty minutes, but I wound up watching the whole thing! I couldn't tear my gaze away from it. CODEPENDENT LESBIAN SPACE ALIEN SEEKS SAME, my friends, is great stuff!

I don't expect anyone else to be quite as adventurous as me, so here's the description courtesy of instantwatcher.com:

And here's the trailer:


Gotta love a space ship made out of roast beef tins!! Yes, folks, this is as low-fi as sci-fi gets.

Still, the acting is awesome, the humor ranges from slapstick to subversive, and the plot is completely wild. Ladies, CODEPENDENT LESBIAN SPACE ALIEN SEEKS SAME is totally SFR. Even better, it includes lots of social commentary about queerness, courtship rituals, diversity, and the perils of romance through a comedy and SFR lens. The film features an ensemble, largely female cast, but a central romance anchors it all. In fact, director Olnek specifically set out to "…write a gay movie with a happy ending, which of course would involve a trip to outer-space."

I'm going to avoid in-depth tags because of spoilers, plus I want to make sure you have time to watch it (the film clocks in at an entertainment-packed 76 minutes!). I will say that heat level-wise, this film is completely fade to black. It's actually pretty family-friendly-ish. Physical affection between Jane and Zoinx is played for laughs, yet still conveys the sweet, loving nature of their romance.

Despite the buzz surrounding the film BLUE IS THE WARMEST COLOR, films featuring lesbian characters and themes are woefully few. Here's what director Madeleine Olnek had to say about the issue:

RF: Your film is one of the only 2011 Sundance films that deals with lesbian themes. What do you see as the place of LGBTQ cinema in mainstream culture?

MO: Personally, I think it’s too bad that we remain so culturally segregated. Why don’t people feel they can see a lesbian film?  As I like to say about my film, “It’s lesbian space aliens for the entire family.” We’ve had wonderful responses as we have traveled to festivals across the country and internationally, everyone from young sci-fi guys to senior citizens have enjoyed the picture. The mainstream is more than ready for authentic LGBTQ cinema– it’s just too bad that the opportunities for people to see these movies are so few and far between. The movies are out there at festivals and they are great, it’s just that some of the bigger distribution companies can be afraid to release them, thinking that the audiences are not there. But they are there, I believe, especially for comedy, which is a universal language.

I highly recommend reading the entire interview as it provides fun behind-the-scenes reveals as well as a fascinating look at Ms. Olnek's creative process. I understand why she chose a comedic SF approach in order to increase appeal, but I hope that one day a non-comedic lesbian SFR film will make it to mainstream theaters. My fingers are crossed!