At the Coffee Time Romance Steampunk page, I'm presenting a roundup of links and titles.

On the book news front, I recently found out about PRISONER (Echo's Wolf #1) by Lia Silver. The blurb tags it as PNR, but also has references genetic engineering. Either it's a PNR-SFR hybrid, or an SFR in disguise. :)

Anyway, one Goodreads review mentioned the hero has a severe dyslexia condition and that the book deals with combat related PTSD. At .99 cents (Amazon U.S.), I couldn't resist. If you're also looking to diversify your SFR/PNR reading, here's the cover and blurb so you can learn more: 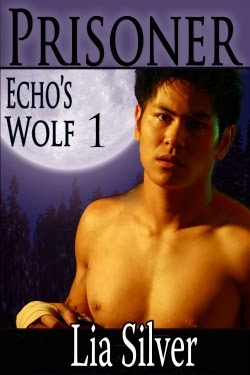 Echo was created to be a weapon.

Echo was born when a secret laboratory tried to genetically engineer the perfect assassin. Two clones survived: Echo, the success, and Charlie, the failure. Stronger and faster than any normal human, Echo knows no life but killing, and has never loved or been loved by anyone but her frail sister. But that’s about to change…

DJ Torres made himself into a Marine.

DJ was born a werewolf. But he grew up to be a rebel, and left his pack to join the Marines. When his helicopter was shot down in Afghanistan and his best friend lay dying in his arms, DJ bit him to save his life. Revealed as a shifter, DJ is imprisoned in the lab and subjected to mind games and experiments. But the lab rat is about to bite back…

Can two misfit people fit together?

Echo was engineered to surpass the limits of the human body, but she doesn’t know how to relate to other human beings. No one thought DJ could make it as a Marine, but he doesn’t know when to quit. When they’re forced to partner up, will they betray each other as their only chance to escape? Or will they risk everything on a love that crosses the battle lines?

Prisoner is a full-length paranormal romance novel. It is the first book in a three-book series, Echo’s Wolf. Prisoner has a happily for now ending. The third book will have the happily ever after.

The Galaxy Express will be on a brief hiatus for the rest of the week. Once I return, I'll have a Very Special Epic Post for you about the cracktastic K-drama MY LOVE FROM ANOTHER STAR!