Authors Shona Husk, Mel Teshco, and Denise Rossetti have collaborated on an interesting-looking project: a shared-world, sizzling sci-fi romance series of novellas called ES Siren (Momentum). The first three books are out now. The next three will come out in late November 2014.


YOURS TO UNCOVER by Mel Teshco 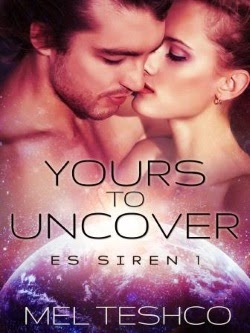 Is she willing to sacrifice everything to keep her secret and her lover safe?

It's the year 2202. Earth is grossly overpopulated and seriously polluted. Rita Songworth has spent half her twenty-two years trying to escape the dying planet. It's taken the last five of those years to realize making it in the hard-ass infantry is her only way out, via space transporter Earth Ship Siren.

But the journey to Unity, the new colony, isn't easy. Rita has to resist an attraction to hard, brutish prisoner, Tristan MacFallan, whose masterful hands create more than the beautiful art he's been assigned to make. His forbidden touch affects her profoundly and he sees things in her no man ever has before. But obeying Kane, her ex-lover and malicious lieutenant, who is appointed to keeping the prisoners under guard, comes at a high price. Is she willing to sacrifice everything to keep her secret and her lover safe?

YOURS TO COMMAND by Shona Husk 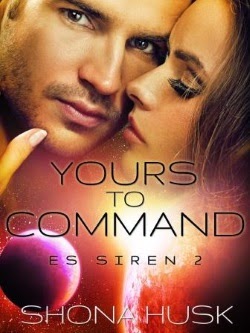 He would do anything to protect her, if only she'd let him.

Corporal Sienna Jade wasn't given a choice about joining the mission to Unity. Seen as a troublemaker after reporting an assault by a senior officer, the army wanted her gone. Sienna resents the army for assigning her to Earth Ship Siren, and suspects the fleet's Unity mission will fail. But others would do anything to escape Earth ...

Alex Tariel knew his only chance to get a place on ES Siren was as a prisoner, so he stole water rations. As a former construction foreman, his skills make him a valuable prisoner on board, but still a prisoner unable to control his own life. Instead of keeping his head down, he gets involved in the fights set up for gambling privilege tokens, the only currency aboard ship among the prisoners.

Getting patched up by Corporal Jade might be the best thing that's happened to Alex on the trip so far, but becoming her ship husband puts him between her and the lieutenant who tried to kill her for kicks on Earth. While Sienna tries to keep control of her feelings for Alex, Alex would do anything to protect her, if only she'd let him.

As ES Siren faces its first crisis, a little trust and love goes a long way.

YOURS TO DESIRE by Denise Rossetti 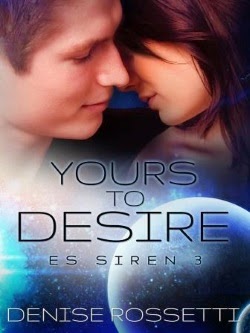 A man more potent than any drug.

It's 2202 and on board ES Siren, the brilliant Doctor Lily Kwan has worked in secret to develop an antidote for the aphrodisiac rape drug, sexmeth.

She'd be overjoyed if it wasn't for an embarrassing problem: the antidote has no effect on her extraordinary reaction to Connor Madison, the Siren's tough quartermaster. Scientifically, it should be impossible, but the man's a raging fever in her blood. If a single dark glance sets Lily on fire, a kiss might kill her dead – but what a way to go!

A former gang rat from the slums of a dying world, Con came up the hard way, so when geeky Doctor Kwan tops his hit list of possible drug runners, nothing's going to save her—not her family's money, nor her clever mind.

Not even the smile in her eyes.

***
The concept of a shared-world series seems so much more doable with digital-first publishing. When mainstream print publishers were the only game in town, authors had little choice no matter how viable the idea. Now, the chances are stronger they can flex this kind of creative freedom with a digital-first publisher--and certainly through the self-publishing process. In turn, readers have more choices!

Upon learning about the new venture of Shona Husk, Mel Teshco, and Denise Rossetti, I invited them aboard so we could learn more about it!

The Galaxy Express: What sparked the idea for ES Siren?

MT) Shona Husk approached Denise and I with a sci-fi continuity she was keen to explore, and it just grew from there. Lots of emails back and forth, and a few long Skype sessions as we brainstormed ideas.

SH) I thought it would be fun to write a series with other authors. Mel and Denise sprung to mind as we all like to like sexy stories and love to world build.

DR) Shona had a brilliant idea based on Australia's First Fleet. In the far future, why not send a similar convoy away from the dying Earth, heading for a fledgling colony way out in space? It's great concept, practical as well as coldblooded. The convicts - who far outnumber the military and civilians - are expendable, there as grunt labour. Then there are the career soldiers and pilots, and finally a small, but dedicated group of civilians with special skills. Add to the mix the inevitable criminals, some of whom wear the hated yellow uniform of the convict (and some who don't) and the scope for drama is purely breathtaking.

Mel and I couldn't wait to join in!

TGE: Describe the collaboration and production process for this series.

SH) I’d said my idea was BSG meet Australian first fleet (which being Aussies we all knew immediately that men, convicts, military and civvies in space). From there we built the world together working out all the details as we went. We pitched the series last year at a conference (we hadn’t written anything yet) and we were asked for 1 chapter each and a synopsis and based on that we sold six stories in the series. We sent a lot of emails as we built the world and characters making sure we were all on the same ship so to speak :)

DR) We've all enjoyed the hell out of building this world, but it's been a complicated process. One of us will come up with a really cool idea and the others will improve on it, or even turn it upside down! It's been important to keep track, so there have been emails, emails and more emails, plus the occasional Skype call. Dropbox has been incredibly useful too. We keep reference documents there and drafts and critiques of each other's work.

I have to admit I'm awed at how well it's worked. I think trusting each other and being generous and giving has been incredibly important. I know Shona and Mel and have helped me tremendously.

TGE: Is there an overarching plot that connects all the books? Do the stories work as standalones or are they best read in order?

MT) Yes. As an example, in the first three books we all had to deal with the same antagonist, the evil Lieutenant Zane. Denise was lucky enough to ‘rid’ him in the most wonderful way possible *evil laugh* - a bit of his own medicine, so to speak. The most obvious overarching plot is the fact that all our characters want to reach the planet of Solitaire, the new world where they hope to survive and even flourish again. Although it’s best to read the books in order to get a more in-depth understanding of the characters' trials and tribulations and even the sense of time passing, the books can also be read as standalones as we’ve fed in the information necessary to ensure readers won’t get muddled.

SH) Each set of three has its own mini arc as Mel said, but each book also stands alone (I think that is very important when writing a series as you never know which book a reader will pick up first). We also mixed up the writing order of each set of 3 so I kick off the next set in November and Mel concludes it.

DR) I think the stories work fine as standalones, but the reader will gain a much richer sense of the world if she reads all three in order. Of course, the characters stroll in and out of each other's books, so there is that. heh heh

TGE: Are the stories more character-driven or plot-driven?

MT) To be honest, I think there’s a healthy dose of both.

SH) I think while there’s an external plot, it is a character drama. We want people to be hoping they reach the planet in one piece (and fall in love along the way). That said there is plenty of action happening. From the Rounds where the prisoners fight to the villain of the first three books scheming and making trouble.

DR)  I honestly don't know how to answer this question. Romances are about relationships - and these books are most definitely romances - so solid, three-dimensional characters are essential. We've got those in spades - a brutal prisoner who creates beautiful art, a geeky scientist with a big secret, a medico unfairly labelled a troublemaker. And that's not to mention their partners, who are perfect for them, even if they don't necessarily think so at first.

On the other hand, this is unashamedly Science Fiction. Stuff happens in SF, everyone knows that, so yes, there is plot and action and adventure and derring-do. Happy sigh ...

TGE: The premise includes a reference to a futuristic, polluted Earth. Would "cli-fi" be an accurate tag for this setting? Please name a few other tags that would describe the stories.

DR) Oh yeah. Cli-Fi is perfect (I love it!) The Earth is dying, choking on its own filth, destroyed by the greed of a wealthy few. In fact, I've just done some some truly dreadful things to Sydney Harbour bridge and the Opera House in Mine to Keep, which will be Book 5 in the series. Sshh! Don't tell the Sydneysiders!

TGE: What can readers expect as far as heat level?

MT) These are some seriously hot books, though I think the graphic language has been toned down a notch.

TGE: Can you give us a hint about what's coming in the next three books?

MT) A micrometeoroid shower that almost puts a stop to getting to the new world. Oh, and lots of romance and sex amongst the strife.

SH) Yep it is an epic disaster but it is played out at the human level and how it impacts the people on ES Siren. My story (working title Mine to Hold) has two heroes and a heroine but it isn’t your typical ménage and not everything is as it seems as the vet, a cold blooded killer and a maintenance engineer realise how precarious life in space can be.

DR) There's a life-threatening emergency, hearts race, unlikely couples (or more!) are thrown together. In my book, Mine to Keep (Book 5), the irresistible force - a handsome con man - meets the immovable object - a hard-as-nails military cop. Sparks ensue!

TGE: Where can readers find the ES Siren books?

And coming soon to Barnes and Noble.

TGE: Where can readers connect with you?

Readers can go behind the scenes of ES Siren and read character diaries here: www.essiren.blogspot.com

Ms. Husk, Ms. Teshco, and Ms. Rossetti, thanks for your time, and for your art.