I rounded up some coverage about EQUALS (2015), a film from Drake Doremus that's being described as a science fiction romance in the vein of George Orwell's 1984. Difficult to predict at this point if EQUALS will have an upbeat ending, though.

Variety posted a "first look" at an image from the film. Here's the shot, followed by the log line: 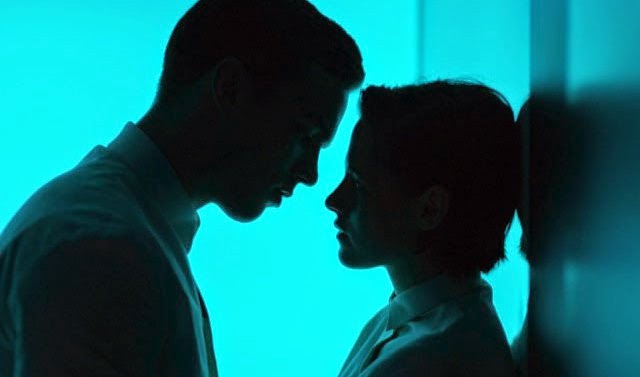 "The love story is set in the future where emotions have been eradicated, but a disease can cause them to return."

The film’s about this kind of futuristic world where humans destroyed the world, and then they’ve kind of made this collective where everyone works for space travel and all that stuff, but because human emotion was essentially what caused us to destroy the world, now when you’re kids you get genetically modified essentially so that you don’t feel and you don’t feel love.  You’re not like an autobot, you can still create and you can still work.  It’s all still there, but the soul’s kind of been taken out of you.  Then my character starts to see things in this world, it all starts to unravel around him, and he starts noticing Kristen Stewart’s character and he’s like, “Hang on a minute, there’s more here going on and I’m starting to feel things,” and then the movie takes off from there.

Does size matter when it comes to shooting love scenes with Kristen Stewart? British actor Nicholas Hoult, 24, plays the Twilight alum's love interest in the new dystopian sci-fi film Equals. He recently joked about the logistics of filming intimate scenes with the actress, who is several inches shorter than him.

"I based the character loosely on Quasimodo at times," he said in an interview with MTV that was posted on Thursday, referring to Victor Hugo's (and Disney's) The Hunchback of Notre Dame title character.

Hey – remember how 1984 is kinda sorta getting remade as a romance starring Kristen Stewart and Nicholas Hoult, called Equals? And how it’s directed by Drake Doremus, who directed Like Crazy? Well now that we’ve gotten this VERY revealing first-look photo, via The Hollywood Reporter, we can tell you one more thing about it: there’s a scene in it, wait for it, that’s, as Jezebel also deduced, TINTED BLUE!! That’s right, if you check out this revealing pic below, in which Stewart and Hoult – as might seem shocking in a romance film – seem about to kiss – you’ll see, to your utter surprise, I’ll say it again, that it’s BLUE!