Author Jody Wallace has unleashed THE ADVENTURES OF MARI SHU, a hilarious series of interactive sci-fi romance novellas! Volumes 1 and 2 are out now, with more to follow. 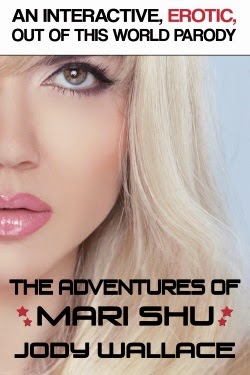 Mari Shu, a factory drudge in the year 4000-something, must choose how to protect her sisters, her purity, and her own conscience in a bleak futuristic society that’s been polluted by smog, rampant commercialism, tacky jumpsuits, sexual perversions, unjust socioeconomics, interstellar travel, and inconsistent use of the Oxford comma.

True story: I was the first person to lay eyes on this series. But before I continue, you should know I take my SFR very seriously. So seriously, in fact, that I'll admit to being comedically-challenged when it comes to SFRs of the funny kind. I can appreciate the humor, but I really, really, really need to be in the right mood for maximum enjoyment.

So when Jody Wallace asked if I wanted to check out the first part of Mari Shu's adventures, I was basically like, sure, send it over. I'm always game for something new. I was familiar with Ms. Wallace's work, like the quirky short story FIELD TRIP and her sci-fi romance ANGELI, which features humorous elements. With Mari Shu, I knew to expect some kooky stuff, but that's about it.

What I didn't expect was an SFR so stuffed-to-the-proverbial-hilt with jokes--and layers of more jokes on top of those--and jumpsuits, and orange skin--not to mention all that goo--that I actually laughed out loud, sometimes two or three times per page. Even just that small taste told me THE ADVENTURES OF MARI SHU was a special kind of SFR. I'd never read anything like it.

In fact, the story was so over the top, so fascinatingly disturbing, and so full of rampant sexxoring that I started egging Jody on to write more. The more outrageous, the better! And guess what--she did! To be sure, THE ADVENTURES OF MARI SHU would have happened with or without me, but it sure was great to get an early sneak peek.

This series can be enjoyed at the pure story level, but for added value it also pokes fun at just about every science fiction and romance element you can imagine. I happen to know Jody Wallace is a longtime fan of SF, romance, and SFR, but even if I didn't, I could tell THE ADVENTURES OF MARI SHU was written by someone who had great regard for the genres, but also wasn't afraid to have some fun with them. Okay, a lot of fun! Uproarious, scandalous, and no-holds-barred fun!

This interactive parody series will also appeal to readers who love spotting humorous references to romance and SF books as well as SF films and television shows. If you enjoy wacky, absurdist, raunchy, and all the other types of humor Jody Wallace used in the stories, but that I don't know the name of, then THE ADVENTURES OF MARI SHU is for you.

Tl;dr: Jody Wallace's THE ADVENTURES OF MARI SHU is hilarious! 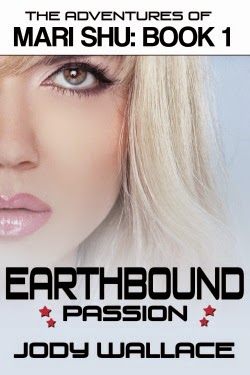 In this first of many planned interactive adventures, Mari Shu’s decision to stick to Olde Earth opportunities, such as professional sexxoring, has deeper consequences than she could ever have dreamed possible.

Warning: Book contains offensive material. Buttloads of boatloads of offensive, vulgar, disrespectful, and possibly triggering material. Sexual, political, economic, racial, physical, typographical, religious—really, trying to hit all the big ones. Please make sure to sign your correct name to the hate mail so we can give proper credit in the follow-up volume entitled, “The Hate Mails to Mari Shu”. 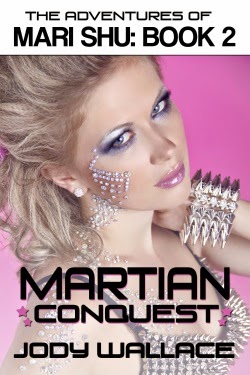 In this second jubilant outing, Mari Shu decides to desert Olde Earth for the unfamiliar comforts and sexual practices of Mars…and possible elevation to the elite Martian rover class.

Warning: Book contains offensive material. Buttloads of boatloads of offensive, vulgar, disrespectful, and possibly triggering material. Sexual, political, economic, racial, physical, typographical, religious—really, trying to hit all the big ones. Please make sure to sign your correct name to the hate mail so we can give proper credit in the follow-up volume entitled, “The Hate Mails to Mari Shu”.