Tropes Vs. Worldbuilding In SFR


I'm going to riff off of Donna S. Frelick's post about Authentic Settings A Challenge In SFR because she raises some interesting points and I wanted to unpack them a bit. Here's the least you need to know:

Those of us who write SFR tend to be science and space geeks from early childhood.  We seek out any opportunity, slim though it may be, to stand close to something, uh, space-y.  Field trips to an observatory, to the Smithsonian’s Air and Space Museum or, if we’re lucky, to see a launch at Cape Canaveral bring squeals of delight.  But you have to admit, we have greater challenges finding a way to immerse ourselves in setting details for planets that exist only in our minds.

That’s why, in a way, I “cheat” by setting parts of my stories here on Earth.  (That’s true of the first two of my Interstellar Rescue series, at least.  The third book, Fools Rush In, is set entirely in space.)  It helps me as a writer, but I think it also helps the reader relate to the story.  If some of the places are familiar, then a reader new to SFR might have an easier time accepting the introduction of more alien places and ideas.

After reading Donna's post, I was reminded of a book by Margaret Taylor called A FIRST LOVE NEVER DIES (Spi-Corp #1). (Thanks to passenger K for the heads up!). Read the blurb for this book: 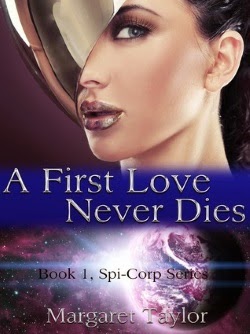 Janel Canton must be pregnant by the time Fleet Commander Pearson Acto catches up to her again and only one man will do for that. Her one true love, sexy Montana Sheriff Jake Reeves. But returning to Earth she finds he's still mourning his dead wife and has become very comfortable in the small-town life. Will introducing him to reality of the Universe be enough for him to move on to a new life?

Sheriff Jake Reeves never thought the nerdy girl he and his cronies picked on in High School would someday become a star ship captain capable of holding her own in just about any situation. But when he meets up with Janel again at their 20 year reunion, that's exactly what he finds! Gone is the nerdy little mouse that never fought back. In it's place, is a rough and tumble, no holds barred, drop-dead gorgeous woman who he's going to have one hell of a time not falling in love with...

***
Now I'm going to tease out a few romance tropes* promised by the description alone:

* True love/fated mates
* Pregnancy (not sure if this element represents the end goal of family life or secret baby trope. Maybe both?)
* Small-town setting
* The ugly duckling heroine
* Reunited lovers
* Tortured hero with deceased wife
* protector Alpha hero (in this case, a Sheriff)
* romance with a Western setting

That's quite a few, eh? Think about what Donna wrote in her post, and then consider this question: What in that list of tropes has anything to do with science fiction worldbuilding? If you answer nothing, then you're absolutely right.

Going on tropes alone, A FIRST LOVE NEVER DIES would work perfectly well in a contemporary setting. So my second question is this: are readers reading this book primarily for the worldbuilding, or the tropes? I ask because with this blurb, the tropes are being broadcast loud and clear. (Caveat: I've not read the book so for all I know, the blurb may accurately reflect the story, or it may not.).

One could view this issue from another angle: What's the purpose of using an SF setting for a story whose issues and themes (as promised by the blurb) are clearly rooted in contemporary times? Does setting really matter to readers who read for the tropes? I don't mean that in a critical way, rather, I'm saying I'm the last person who wants to waste any reader's time about SFR when what they truly prefer are traditional romance tropes that might be best served by a contemporary or historical setting. If the science fictional setting doesn't bring anything new to the table, how should a blogger like me position trope-driven science fiction romances? (A positive or a negative depending on the reader?)

Question from a marketing/visibility/appeal angle: Do some SFR authors worry too much about worldbuilding when the real draw for some readers (maybe even a large group of readers) might be the tropes?

Now you tell me--what's your take on the role that romance tropes play in SFR? To what extent do tropes impact your choice of books in this genre?