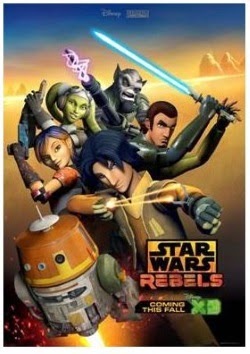 In 1977, Star Wars, A New Hope, played for nineteen weeks in my little hometown of Kalispell, MT. It was a phenomenon. I saw it half a dozen times, or maybe more. During the final week the local downtown theater put tickets down to .50. Even my parents went.

I was a fan. If there had been internet, I would have been on all the sites and probably writing fanfic.

Over the years I saw the prequel trilogy and a few of The Clone Wars show, but by then I was a working mom with three kids and far less time. Now and then I would pick up a Star Wars paperback and re –immerse into the Star Wars world. I’m thrilled sequel movies are planned.

Recently I started watching the Disney tv show Star Wars Rebels, and it hit a sweet spot. I even expect romance!

The animation: This is a world away from the Scooby Doo cartoons of my childhood. I find it visually appealing.

The time frame: Star Wars Rebels takes place just a few years before A New Hope, so Luke and Leia are teens living their lives prior to the movie. Darth Vader, R2D2, Obi-Wan Kenobi, Yoda and all the favorite characters and villains are contemporaries of this crew. For me, this is the time frame that I’ve invested in the most. All the things I most loved about Star Wars were in this ‘world’.

Firefly parallels:  A small crew aboard a space freighter with Robin Hood smuggling activities. They were the losers in the war, and they are hunted. Kanan survived the Jedi purge and must hide his Jedi status.

Canaan, voiced by Freddie Prinze Jr. He leads the small group. A Jedi in hiding, he was just a teen when the Jedi were purged.  He has a dangerous but competent vibe, ripe for romance IMO.

Ezra, teenaged pickpocket and main character. He can use the Force but needs a teacher. Kanan, who was unable to finish his own Jedi training, tries to teach him.

Zeb, the huge protector, grouchy but also the comic relief.

Strong Women: Hera, the skilled pilot and ‘glue’. The mother of the group. If anyone deserves a romance, it is Hera. I’d like to see more about her.

Sabine, the young weapons expert who enjoys wearing bright colors and tagging, and seems to have a few sparks with Ezra.

The Inquisitor: The bad guy, seeking to destroy the remaining Jedi. He is voiced by the delicious Jason Isaacs (Lucius Malfoy, Harry Potter films.)

Will romance bloom? I think so, if the show lasts.  Disney is certainly not opposed to romance!

My hope-- perhaps Star Wars Rebels will usher in some space opera television shows since there has been such a lack of them in recent years. An SFR writer and reader can dream! 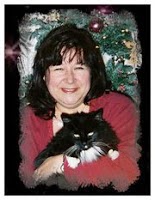 Take a shy, chubby, Catholic school girl bookworm from Montana. Hand her a stack of her much older brother’s sci fi and fantasy novels, James Bond books and horror comics. Later, introduce Barbara Cartland and the world of romance fiction.

Get her a teaching job or two in authentic, one room Montana schools, ala Laura Ingels Wilder.

Marry her off to a great guy, move her to a big city in Tornado Alley, then pop three daughters out of her in twenty two months(one set of identical twins).

Then, make her a jinx–every great genre TV show she loves gets the ax– Beauty and the Beast, Dark Angel–and Buffy and Spike NEVER have a happy ending! She gets upset about no romance in the world, and fires up to write her own stories with happy endings.

Throw this all together into a small house in Wyoming, along with a small bouncy dog named Baxter and too many cats, shake constantly and pour it out onto a computer keyboard.

There! You have me, Melisse Aires. 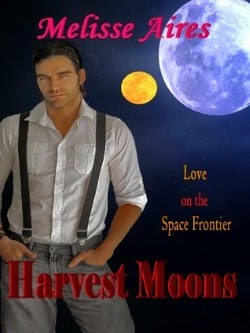 With the death of her no-account husband, Polly is the sole owner of a farm steading on the planet Celstar. She is determined to hold the steading and make a life for herself and two Synth children in her care. Her nearest neighbor, widower Fallon Verdad, is the big landowner in the territory and also her local Councilman. Like most of the other settlers, Fallon is a Shimmer, a horse shifter, while Polly is human—well, mostly human. Their attraction to each other is electric and hard to deny. An affair would lead to scandal in this conservative community. Scandal is the last thing Polly needs.
Posted by Heather Massey at 5:00 PM
Newer Post Older Post Home