[Introduction: I first blogged about HEARTBEEPS back in 2011. This film is so bizarre and inadvertently funny I figured I'd unleash a revamped post about it for TGE's Cosmic Laughs & Love event. You're welcome!] 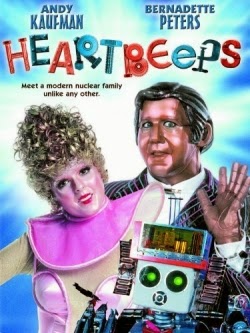 HEARTBEEPS (1981), starring Andy Kaufman and Bernadette Peters, has got to be one of the worst science fiction romance films ever made. Possibly also one of the worst comedies ever to hit the silver screen. I can’t even describe how bad this film is. Painfully bad. You-won’t-forgive-yourself-in-the-morning bad. In fact, I wouldn’t wish it on my worst enemy, although on second thought, it might come in handy if Earth needs to ward off an alien invasion using cringeworthy cinema.

Who was the target audience for this film? Based on my research, this film was allegedly created as a test vehicle for Andy Kaufman. The actor was shopping around a screenplay he wrote, but the studio wanted to see if he could carry a movie first before they would agree to green-light his. I don’t understand the logic in that, but that right there should tell you something about the logic of this movie.

HEARTBEEPS buries Andy Kaufman's and Bernadette Peters' talents under a leaden script, so it isn't for their fans. It has a cutesy factor that might appeal to kids (assuming they aren’t bored to tears first), but it also has some very trauma-inducing imagery—like watching your parents “die.” There's also quite a bit of unnecessary cursing. WTF? And yet it’s far, far too tedious for adults.

So let's review: it's not for kids, adults, or the stars' fans. Who does that leave? The retro-robot audience perhaps?

Check out the trailer--if you dare!