I was recently having fun perusing Bold Strokes Books' catalog. In addition to downloading samples of books by authors Gun Brooke and Gabrielle Goldsby, I discovered two other titles that seem like they could potentially fall under the sci-fi romance umbrella, or at least hold appeal for SFR readers. The first is already out and the second is forthcoming: 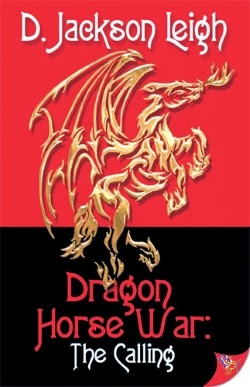 When is war justified to preserve peace?

Society has evolved into one collective belief that celebrates diversity. Luxury credits are earned and spent only after the world population is fed and educated. But when catastrophic weather kills thousands and destroys crops, people begin to look for answers among ancient legends of guilt, retribution, and a vengeful deity.

Jael, seasoned commander of a latent cell of dragon horse warriors, understands what Alyssa, an alluring young priestess, doesn’t—words won’t be enough to quell the violent sect preying on the population’s fear and hunger. As their conflicting ideologies threaten to jeopardize their mission, Alyssa and Jael realize their growing attraction and entwined destiny might be more formidable than the enemy they have been called upon to defeat. 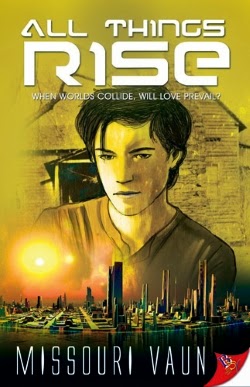 Cole rescues Ava, a pilot from the Cloud City of Easton who crash-lands near her farm, setting in motion events that will alter the course of her life. It’s a hundred years after peak oil and the rich have risen above the Earth, inhabiting great Cloud Cities, while those left behind live a rural existence, off the grid. After suffering a vicious attack, Cole is transported to the Cloud City of Easton for emergency surgery.

While recuperating and adrift in the unfamiliar social landscape of Easton, Cole begins a journey of discovery. When she meets Audrey, a beautiful doctor, the attraction they share is penetrating and possibly life altering. Explosions, staged by a ruthless underground movement, nearly bring Easton to the brink of collapse. The crisis that rocks the city forces Cole and Audrey to weigh what truly holds meaning and what each is willing to sacrifice for love.

***
Cool covers, too! If anyone knows for sure if these titles fall into the SFR/romantic SF category, hit me up; otherwise I'll plan on checking them out and will report back!