After her post, read on for information about the book, special pre-order price details, and an excerpt!
Take it away, Charlee! 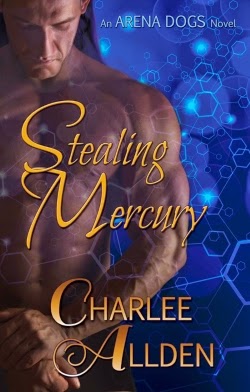 Let’s face it. As dull as comfortable shoes may sound, they’re really a top priority for any trip. Although, there is something to be said for having an excuse to be carried, wrapped around a super hot alpha male or held against a muscled chest. Still, it’s better to be prepared. There are far better reasons to wrap yourself around a sexy man.

Unfortunately, you can’t always get away for your adventure alone. Intergalactic baddies have a way of turning up at the worst of times.

You might not have noticed, but lots of things on a space ship are tied down and locked up. You might even find yourself locked on the other side of a sturdy barrier from your dream man…or men. *wink*

Okay, I know this is a bulky item, but it’s important. Have you ever tried lying on the deck of a space ship? Trust me, after that hard ground sounds good. To conserve space, go with something inflatable.

Another travel staple that you might want to have to pass out to other travelers when you have hot, noisy, wild sex. And you would, wouldn’t you? Have wild, noisy sex, I mean. You might also want to keep a pair for yourself to slip in your ears right after sex. That is, if you don’t like hearing your man howling his pleasure and hearing your other potential lover howling back.

3. a DO NOT DISTURB beacon

For times when something as serious as a blaster is not required (see # 9) a simple sign might avoid uncomfortable moments—like having old frenemys walk in to find you naked in bed with three men. Hey, it can happen (see # 4).

2. a field guide to alpha males

Why spend all your time trying to figure out your alpha males, or being shocked by them, when you could be spending more time enjoying them.

They are all man and waiting just for you.

Charlee Allden is a long time fan of love, adventure, and happily-ever-after. She grew up in Florida where a huge fallen oak tree in the swampy woods near her home served as her very own Star Ship Enterprise. Today, Charlee is a multi award winning author of sexy, intense, romantic adventure and suspense. She still lives in Florida across the street from a miniature version of the swamp she lived by as a child. You can connect with Charlee online and sign up for new release announcements by visiting her website at http://www.charleeallden.com/ 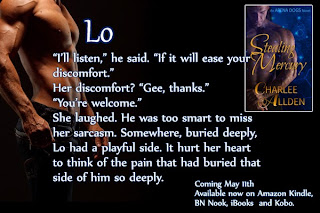 About the Arena Dogs series

Announcing a new release… Stealing Mercury (May 11, 2015), available at all major book retailers.
Stealing Mercury is the first Arena Dogs novel—a  sexy, intense, new series that introduces readers to an enslaved race, engineered by The Roma Company to fight and die in gladiator-style arena games. In Stealing Mercury, Samantha Devlin is hired to pilot a courier ship, when she discovers her cargo is actually three Arena Dogs condemned to death. Mercury, their leader, and Lo, his emotionally broken arena-brother, challenge all her notions of honor, loyalty, and love as she discovers just how much she will risk to keep them alive.

Currently on sale for .99 through May 14th. Click here for pre-order buy links.

Born a slave, Mercury is an Arena Dog, genetically engineered to fight and die in the Arena for the entertainment of others. Trained as a gladiator from boyhood, he’s gathered and led one of the most successful teams in arena history. In their violent world, where men must form alliances and share what little bounty they have to survive, his only goal has been to keep his men alive. But two of his men are dead and he, Diablo and Carnage are condemned to be hunted down and killed in Arena’s newest inhuman sport. Worse, their demise will leave Carn’s mate, a woman Mercury has sworn to protect, alone and vulnerable. And then there is Samantha—a courageous human he has no right to claim. But she is his. He feels it deep in his soul and with an ache in his body he can’t deny.

Samantha Devlin is a down-on-her-luck indie-freight pilot, working in the belly of a corporate hauler until she can earn the credits for her own ship. When an old friend hires her as an emergency replacement to pilot a cargo carrier for the Roma Company, she’s shocked to learn her cargo is three, living, breathing, and dangerously sexy Arena Dogs. When Samantha learns she’s taking the men to their deaths, she must decide is she if willing to risking everything for a man whose customs require that he share her with one of his men and demands he return to Roma to protect another woman. Her heart tells her Mercury is worth any cost, but her head sees nothing ahead but disaster.

Caution: features two scorching hot heroes and one impossibly impulsive woman. Their story may just make you want to steal an Arena Dog or two of your own.

He pressed his lips to her forehead in a gesture both sweet and scorching. “I ache for you.” Lusty agony laced through the quietly spoken words.

She cursed low. “Damn it, I can’t think straight when you say things like that.”

A rough chuckle rumbled in his throat as he lifted her higher then licked a path down to her collar bone. “There’s no need to think right now, Samantha.”

He was seducing her. The man who’d known nothing but violence was seducing her and she had to acknowledge she wanted to give in, to be seduced. His hands skimmed her thighs on their way to her ass. He squeezed, urging her to wrap herself more tightly around him. His hands felt huge on her body as he held her close and headed toward the riverbank.

She stroked her palms over his shoulders and the bunching muscles of his arms as he carried her out of the water. The moment he stopped on the grassy bank, he leaned in to take her mouth. It wasn’t a light, easy, getting-to-know-you kiss. It was a kiss of pure possession. He licked her lips and pressed his tongue past them to stroke deep inside. She met the thrust of his tongue, needing everything he offered. He growled into her mouth and her stomach did a little flip in response.