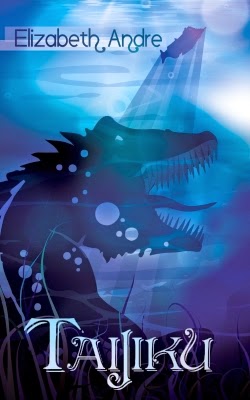 TAIJIKU (Less Than Three Press) by Elizabeth Andre is a cute short story about a juvenile delinquent's adventures aboard an advanced submarine on what seems to be a near future Earth. The story is told from heroine Angela's perspective.

She and her fellow crew members have an encounter with the legendary underwater sea creature known as Taijiku (Godzilla-ish in nature). The story features an ensemble cast of diverse characters (at least as far as their names indicate) and includes a nice guy alien who sports a few tentacles (Earth has made contact with a friendly alien species).

The romance Angela has with crew mate Stella is a small subplot and of the "barely there" romantic SF type (sweet heat level), but it's a quirky story with appeal for sci-fi romance readers. Conflict level: low. Action-adventure: moderate. Danger level: moderate. No gore. Ending type: HFN.

The length and light tone make it good for reading during a commute or when you've got a long wait at the doctor's office.