Ask Not What Your Galaxy Can Do For You....

Greetings, Earthlings! This is Agent Z., Intergalactic Spy, reporting for duty. Houston, I have a problem! Business is booming and I’m being offered more missions than I can possibly handle. My employers have offered me a huge bonus if I can recruit a few more agents. I’ve been employing my highly sophisticated research and headhunting skills *coughgooglecough*, and I have found this likely candidate: 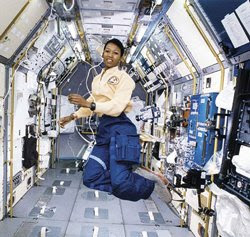 “When I'm asked about the relevance to Black people of what I do, I take that as an affront. It presupposes that Black people have never been involved in exploring the heavens, but this is not so. Ancient African empires—Mali, Songhai, Egypt—had scientists, astronomers. The fact is that space and its resources belong to all of us, not to any one group.”

Her name is Dr. Mae Jemison. Check out her resume:

Born in Decatur, Alabama in 1956, she entered Stanford University at age 16, graduating with degrees in Chemical Engineering and African/African American Studies. She took a medical degree at Cornell, interned at U.S.C. Medical Center, Los Angeles, and then did a two year stint in the Peace Corps.

Inspired by Sally Ride and Nichelle “Uhuru” Nichols, she applied and was accepted for NASA’s astronaut program. In 1992 she became the first African American woman in space, aboard the shuttle Endeavor.

“The first thing I saw from space was Chicago, my hometown …When I grew up in the 1960s the only American astronauts were men. Looking out the window of that space shuttle, I thought if that little girl growing up in Chicago could see her older self now, she would have a huge grin on her face.”

After retiring from NASA, she started her own science and technology company and conducted international science camps for youth. Later, she move into academia, holding professorships at Cornell and Dartmouth, while continuing to raise money for charities and promoting equitable health care around the world.

She found time to walk the runway at Fashion Week, and is also a dancer, a choreographer, and yup—she’s a Trekkie.

So—what do you think? Do you suppose she’d like to add intergalactic spy to that amazing resume? Or do you have another suggestion? Tell me—who do you think I should recruit and why?