Is Science Fiction in trouble? It depends.

If we’re talking film and television, no. There are some pretty darn successful projects that have reached astronomical levels of public awareness and cultural longevity. Eight out of ten films topping the all-time worldwide box office are SF/fantasy related.

But if we’re talking SF books, short stories, and magazines...well, things could be considerably better. And that’s what we all want.

My discourse today is inspired by Lyda Morehouse’s piece at this SFSignal post and also the unfortunate fact that SF inhabits a small percentage of the book market, one hovering around 7%. It’s a respectable percentage, but why not command more?

Obviously, SF will never comprise 100% of the market (not that there’s anything wrong with that). Yet it has the potential to gain even more popularity. The question is this: How can SF grow and thrive to the level of an “it” genre (Clara Bow approved)? 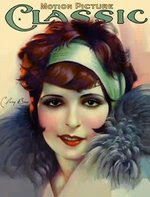 Why, with sex and romance, of course! Not all books, mind you, because that would get boring very quickly. But publishers certainly could endorse/support/commission a greater number of stories that feature a romance, with or without the sex. A modified (read=flexibility about what that entails) Happily Ever After might also be in order. Like, include an HEA, but don’t expect a white picket fence in, say, a mining colony in an asteroid belt.

So if more SF books feature a romantic subplot and if publishers release more SFR books, here are some unscientific but very satisfying results we can expect:

Sex sells. It might be a cliché, but it’s a cliché that works. This will be especially true if the story contains a compelling romance and the word “romance” is somewhere on the cover. Also, slap some man titty on there, too (oh, I kid).

Relationship subplots with not just thinking but also feeling heroes and heroines is not only good story making, it’s also a sound marketing strategy. These elements are not necessarily mutually exclusive (and who knows that better than the Romance community?).

2. A little creative literary engineering will go a long way

Since more books will have greater crossover appeal, SF will gain increased visibility via the blogosphere. Authors/publishers can promote more frequently in both of the online conglomerates that are SF and Romance. Sowing the seeds of love, as it were. Hooray for cross-pollination! Yeah, baby!

Yes, there are film adaptations of literary SF, and more power to them. But how many can the average movie-goer recollect off the top of his/her head? How many made over 300 million, or even 100 million in domestic gross?

The addition of a romance lends itself to a high concept pitch. Tinseltown loves high concept, especially if the movie has the potential to star Angelina Jolie, Scarlett Johansson, or some other opener with an equally high Q rating.

And then there’s the lucrative merchandise rights: Action figures! Lunchboxes! Underoos! Seriously, the promotional opportunities will increase, with authors scoring greater exposure by doing interviews for the DVD extras.

As it turns out, Hollywood isn’t the only one hip to the glories of SFR—even Bollywood is getting in on the action! (Thanks to Laurie at Spacefreighter’s Lounge for the link).

4. More readers will get off on it—intellectually and emotionally

There are plenty of SF stories that satisfy on an emotional level. So why not highlight tales with romance already present more aggressively through promotional efforts? SF stories that feature characters in love stand a greater chance at demonstrating how accessible the SF genre is and can be.

There are already a million women who love SF. But there are a gazillion more who love romance, and who are willing to try new stories, worlds, and authors. Give it to them!

SF publishers would benefit from using promotional dollars to catch the attention of romance readers. This is along the lines of what Ms. Morehouse stated, as I interpreted her comments. She said:

The SF/F publishing industry has started to reach out to romance readers, which I think it[sic] a step in the right direction to bring female readers into the mix. I think once it can be established—a la the "surprise" summer hit "Sex in the City"— that women readers represent a dollar sign, it will be easier for women of more "mainstream" science fiction to find a publisher willing to take the risk on them.

Many SF books would appeal to romance readers as is. So there’s also an argument for if it ain’t broke, don’t fix it.

Perhaps a more apt bromide would be this: Use it or lose it!

I’m sure you’re all fit to burst with ideas and opinions, but first I’m announcing a giveaway!

So check this out: A few days ago, I was doing some research for the blog when I came across a film called CODE 46. I hadn’t heard of it, but the premise seemed intriguing. Further research revealed that this award-winning near-future love story, starring Tim Robbins and Samantha Morton, is a cross between LOST IN TRANSLATION and NINETEEN EIGHTY-FOUR. I filed the information away and went to bed. 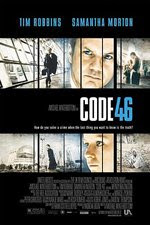 The next day, while I was out running errands, I stopped to investigate a large display of DVDs. Scanning the titles, my eyes lit upon none other than CODE 46!

Of course, I snatched it right up for you, faithful reader. You know the drill: One lucky passenger will win a copy of this (contest limited to U.S. residents). Comment away and Sir Randomizer will have at them. You have until 9 p.m. est on Tuesday, July 8, 2008.