Sex in the Interstellar City

Congratulations, Kimber An! Your number just came up and thou hast won a copy of CODE 46! Please email your name and address to sfrgalaxyNOSPAM@gmail.com. Now on with the show.... 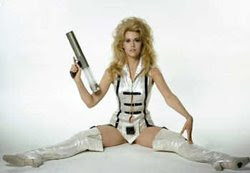 Since we’ve explored what sex and romance can do for SF, there’s the issue of how much sex and how often. Lovemaking scenes can do loads for a story in terms of characterization and tension building, but is there such a phenomenon in SFR as too much sex?

Where there’s romance, there’s sex. Heroes and heroines get laid. A lot. Frequently on the page, sometimes off. Just look at paranormal romances—you’d be hard pressed to find one without at least one sex scene.

Depending on how you define a book that contains SF and romance elements, there are those with lots of sex, those with none, and others in between.

Variety is good. But can too many sex scenes spoil the speculative soup?

Author vision and going where the story takes her is one thing. But what about when marketing enters the picture? Regarding SFR on the heels of the paranormal romance boom—in which the frequency and graphic nature of sex scenes played a significant role—how will that impact the amount of sex scenes in future SFR stories?

I’ve been wondering if the high sex quotient will carry over to SFR books, unintentionally or not. Over at my inaugural Romancing The Blog post “Love and the Final Frontier” I stated:

“...I personally would like to see a strong continuation of SFR books that have the “less is more” mentality regarding sex scenes (not necessarily less sexual tension, tho’). SFR’s concentration on (external) plot, speculative elements, politics, and world building is what will sell these books.

In other words, I hope publishers don’t fall into the mentality that lots of graphic sex is what will help sell SFR books.

I mean, sure, have a few with some wild & frequent sex, but balance it with straight up SF type stories. Or even if an SFR plot is more focused on the romance, I don’t think there’s a need to infuse it with tons of sex scenes.

As a reader coming from the SF side, I don’t expect it nor do I miss it if the consummation happens behind closed doors, or even after the story ends. If it’s there, terrific, but I hope that it’s there because it fits the story, not because there was pressure to include it.”

(Hey, can you blame me for reprinting it here? After all, I already did the work! :)

I also wonder if this issue will impact books published only under the romance umbrella, or whether it will influence SF stories with romantic subplots released from traditional SF imprints.

Stay tuned for more on this topic when I present a scintillating interview with tonight's winner, Kimber An of Enduring Romance—she’s offered up some very thought-provoking ideas and I can’t wait to share them with you!

But first tell me what you think.