Extreme Makeover: BATTLE BEYOND THE STARS

Color me gobsmacked when I came across a post at Geeks of Doom titled “10 Ways To Make A Kick Ass Version of Space: 1999.”

"Well cool," went my thought. I adore SPACE: 1999 and the team there did a fabulous job with a super idea. Later, I just couldn’t stop thinking about it. So, like a shameless number crunching Hollywood executive, I had to rush out and greenlight my own copycat production. 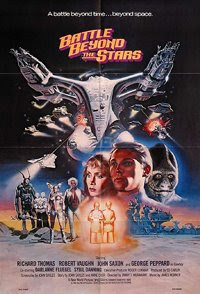 Therefore, I proudly present BATTLE BEYOND THE STARS (1980) for an Extreme Makeover! This slice of cinematic swiss cheese has a fundamentally strong story, but the thrift store production values makes it overdue for a transformation. I have a love affair with BBTS dating back to high school. I was too young to score a ticket when it premiered in the theatre, but the film gained my undying devotion during many a subsequent television broadcast.

The premise is terrific: BATTLE BEYOND THE STARS is about the pacifist citizens of planet Akir who hire a band of ragtag mercenaries to protect them from an evil warlord bent on world domination. However, there’s a reason the premise not only rocks, but also sounds suspiciously familiar: BBTS is basically a remake of THE MAGNIFICENT SEVEN, which itself is a remake of Akira Kurosawa’s SEVEN SAMURAI.

It was also written with aplomb by John Sayles, who has brought us sagacious, “important” films like RETURN OF THE SECAUCUS SEVEN, EIGHT MEN OUT, LONE STAR, and more.

Just check out the tagline:

If all that seems too fantastic to believe, just watch the trailer:

With a 2 million dollar budget, it was exploitation king Roger Corman’s most expensive undertaking. Does the luxurious financing show in the production values? Heck, no. I did mention this was a Roger Corman gig, right? Much of that money went above-the-line to the high priced stars (at the time), George Peppard and Robert Vaughn. (And Roger Corman was notorious for re-using model shots in other films. For example, set your Netflix phasers to SPACE RAIDERS.)

Corman had vision and an unerring sense when it came to picking talent, giving everyone from James Cameron to Francis Ford Coppola and Jack Nicolson a shot early in their careers. But, visionary though he was, the man was always severely hampered by his insistence on "safe," shoestring budgets.

This means BATTLE BEYOND THE STARS fans had to suspend their disbelief like nobody’s business despite a story whose essence is truly timeless. Since Hollywood is currently on a remake rampage, the time seems advantageous to bring this classic science fiction B movie back to the big screen.

Herewith, my notes for the latest incarnation: 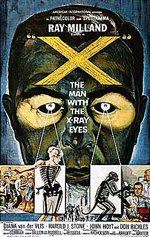 I adore the man's chutzpah and admire his career and appreciate his taste in films. After all, would we have experienced the spectacular spectacle X: THE MAN WITH THE X-RAY EYES if not for him? (And don’t, as I initially made the mistake of doing, knock the soundtrack to that film, composed by Les Baxter. That cat wrought the hippest jungle jazz ever.)

But sorry, Roger. I can’t let you get your paws on my project. Instead, I’m going to hire Hollywood’s new wunderkind director Zack Snyder of 300 and WATCHMEN fame to helm my 100 million dollar version. We’ve seen what Zack can do with sexy Spartans, superheroes, & CGI—now it’s time for him to tackle a science fiction romance extravaganza. (Sure his agent will ask for an insane fee, but let Mr. Snyder add a zombie or two. He'll be happy.)

2) Take the John-Boy out of Shad

Richard Thomas, bless his heart, brought a mix of earnestness and innocence to the role of Shad, the hero who embarks on the quest for the mercenaries that will defend his beloved planet Akir. But the role, as both written and played, is too vanilla and saccharine for today’s audiences. Such a key part demands scrubbing off any lingering scent of THE WALTONS.

Therefore I just requested that the casting director shortlist actor James McAvoy for the role. As the faun Mr. Tumnus in 2005’s THE LION, THE WITCH, AND THE WARDROBE, he showed he can deliver earnestness minus any cloying sweetness. But it’s his compelling, darker role in ATONEMENT that will give Shad edge and bring depth to the hero’s character arc.

(And it doesn't hurt that he’s real purty to look at, too!) 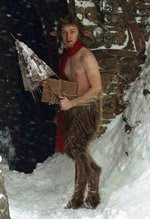 (Oops! That would be the Wrong Picture.) 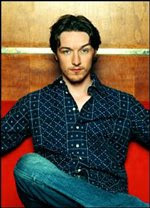 Nanelia, played by Darlanne Fluegel, is the daughter of robotics expert Dr. Hephaestus, an old ally of Akir. When Shad looks the good doctor up, Hephaestus traps him for the nefarious purpose of breeding with his daughter. It’s love at first sight for Nanelia, however, and she frees Shad in order to join him on the quest.

Neither Shad nor Nanelia play too hard to get. I propose changing that. A script tweak could introduce some darker plot twists: What if Nanelia kills her father (to unfold onscreen) while escaping? As violence is against Shad’s nature, he’d have a world of processing to do—not to mention what he’d have to explain to his mother—in order to justify a relationship with her.

Having grown up in an inbred society of androids, it’d make for a more satisfying relationship dynamic to show what Nanelia has to learn about true love. The bottom line is that anything increasing the sexual tension between this pair will make for a more enriching romance. [Edited to add: Copious amounts of PG-13 sex couldn’t hurt, either.]

4) Give Nestor a Borg makeover

Mercenary Nestor is a group of clones who share the same consciousness. Nestor is polite and white, brave and boring. Let’s make this new version sizzle with a dark, messy, complex organism bordering on the phantasmagorical. In other words, lots of ropey, gooey tentacles and stuff.

According to IMDB, “Screenwriter John Sayles had originally envisioned the [mercenary] character of Cayman as a brooding dark humanoid....” While I’m not opposed to including characters of exotic alien races, I don’t think prosthetics technology has quite yet reached the point of rendering such a character very believably. That definitely wasn’t the case around 1979, when the film would most likely have been in production.

In this new version, he will be a she—a sexy female space pirate with a lithe body and clingy black shipsuit hugging all of her curves in just the right places. Since this is a space opera, she’ll sport a black eye-patch and leather gunbelt with a sleek vintage pistol.

That’ll deliver a new level of shivers to the scene where she kidnaps Nanelia, heh heh!

6) In: Urban Cowboys. Out: Rustic Cowboys

While George Peppard’s cigar-smoking, whiskey-swilling Cowboy character radiated retro cool (and must have been a nod to THE MAGNIFICENT SEVEN), the new version of BBTS has to accomplish more than just shock and dazzle the senses—it has to attract that crucial 18-24 male demographic.

Therefore, I suggest a retrofit of the character, although I’m torn between two ideas. The first would entail altering the character’s backstory. This mercenary would still be a gun-runner, but one who stole expensive artillery from the Malmori, his former employer and enemy of Akir. He’d have a conscionable reason, of course. Having used the goods to trick out his freighter a la Pimp My Ride, he’s now on the run. This element gives him more motivation than Peppard’s Cowboy had to join Shad’s army.

For the actor, I’m thinking Ice Cube, using his character Craig Jones from the movie FRIDAY as inspiration. 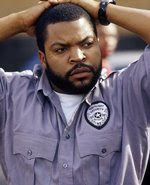 That’s one idea. The other would be to make the character a duo. Keep the same backstory, but use actors Harold Lee and Kumar Patel of HAROLD AND KUMAR GO TO WHITECASTLE fame. Either way, something will be smoked. Hilarity ensues. 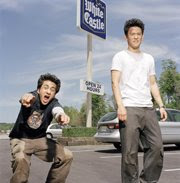 7) No boobs is good news

Nell. Oh heavens, where do I start? Nell is an old-fangled spaceship bequeathed to Shad by his mentor Zed. She’s as much a character as anyone else in the film and guides Shad through some pretty rough battles. I’m all for keeping the name and her salty yet maternal personality, but those obnoxious boobs have got to go. I mean come on, a starship with rootin’ tootin’ mammaries? I’m banishing them to the Phantom Zone.

Instead, I recommend redesigning her with an ugly caterpillar hull. As the story progresses, she can undergo a mysterious transformation and evolve into a beautiful butterfly starship by story’s end. Every time part of the ship alters, it will raise the stakes because Nell won’t be able to function properly during battle or escape scenes.

Now because this is a copycat production, I’m stopping here. As soon as my assistant delivers my steaming double soy latte I’ll ring Peter Jackson to inform him of his new producing job.

Oh yeah, I almost forgot. No need to change the title. It’s catchy, epic, and as romantic as a candlelit dinner.

I am, however, instating a new tagline: