Known throughout the solar system as the #1 Cheerleader of science fiction romance, Kimber An runs Enduring Romance, a book showcase & review site. What’s distinct about her site is the Heat Level feature, a guide to the extent of sexual tension and sex in the books she and her colleagues review. 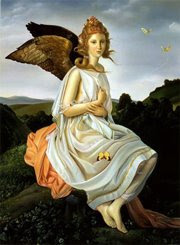 As an experienced(!) romance reader, I asked her to comment on the topic of Heat Level in science fiction romance books because she’s had her ear to the wormholes longer than anyone can remember. It’ll be a satisfying conclusion to the exciting discussions we’ve been having this past week.

The Galaxy Express: First of all, Kimber An, thanks for taking the time to participate.

Kimber An: Thank you for inviting me, Heather! You’re a sweetheart and I’m not worthy!

TGE: First question—What inspired you to include Heat Level (HL) as a factor in your reviews?

KA: I started doing book reviews soon after I launched the original Star Captains’ Daughter blog. As always, I reviewed a variety of books; not just Romance. I was stunned when authors started checking out my blog and commenting. I mean, sheesh, I was just a puny little newbie blogger. What’d I know? Who’d care what I had to say?

I also started interacting with readers more and more and every day. The one complaint I heard the most was about graphic sex scenes in Romance novels. Since the boom of Erotica, the Romance genre has gotten more and more graphic with sex scenes. It’s gotten to a point where a reader cannot find a Romance novel without graphic sex in the New Releases, unless it is Inspirational (religious) or Young Adult (for teens.)

So, what’s a reader to do if she wants to read a Romance novel, but she’s over thirty and not a Christian? She’s expected to skip those scenes. Some readers do that. However, many have abandoned the New Releases altogether and now only read from the library or the used bookstore. The publishing industry, meanwhile, seems to think these readers no longer exist. They base what they put out next on what is selling new right now. Since there is nothing for these readers in New, there are no sales figures reflecting their opinion. Their voice goes unheard.

My book reviewing was getting rather out of hand, taking over my personal playground blog. I decided to start a new blog just for reviewing books and to rate the Heat Level for those readers who did not want to be shocked by graphic sex scenes. I named the blog, Enduring Romance because I believe in Happily Ever After in Real Life, and it’s grown so much I recruited fellow bloggers, Lady Bronco, Kimber Chin, Robyn at [Picnic At] Stonehenge, Mystery Robin, and, pitch-hitter, Sara J. to help out. We now have a Gore-O-Meter to rate violence too. That was Robin’s suggestion, I think.

TGE: As a reader, what are your general impressions about sex/sexual tension in SFR books?

Like a lot of readers who’ve been disenchanted, I’m hesitant to try new SFR authors. Hot Nookie in Outer Space is not enough. I was impressed enough with GRIMSPACE and NETHERWOOD to request ARCs for the blog, but didn’t have time to review them personally. Sara J, my pitch-hitter, kindly volunteered. She does the Science Fiction and Fantasy I want reviewed but I can’t get to at Enduring Romance.

TGE: How do you think these elements impact a science fiction story in particular?

KA: Naturally, I think my favorite authors do an excellent job building tension and balancing the lovemaking with the plot and all that. Linnea is especially good at telling an excellent Science Fiction story without losing it to Standard Issue Sex Scenes. To use a Real Life metaphor, to me SFR without the Intimate Adventure is like sex without foreplay—boring. Read the Jacqueline Lichtenberg interview on this blog from June 23, 2008, for the definition of ‘Intimate Adventure.’

TGE: You’ve read & reviewed many, many books. Have you noticed any HL trends in SFR stories since you first began Enduring Romance? If so, what are your thoughts about them?

KA: I haven’t seen any new trends, just more of the same growing. Heat Levels in New Release Science Fiction Romance are Highly Sensual or Erotic with a handful of Sensual novels in there. While that may capitalize on the genre-wide rush for Erotica dollars, it alienates a significant number of potential readers at the same time. Reader preferences are as varied as they are. Not everyone is the same or likes the same thing. Science Fiction Romance readers may be busy and tired, but they are smart. Really smart. Authors and their associates who doubt that do so to their own peril.

TGE: Any other comments about HL and SFR? 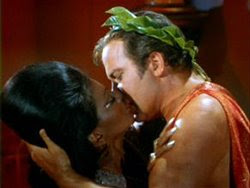 Consider that nearly all SFR readers are women and most of them are mothers. Many are over 35 and, yes, they had wild crushes on Han Solo. But, they also thought Mr. Sulu and Will Smith were hot too. One of the reasons put forth to explain the decline of Science Fiction is that we’re already in the future. We have iPods and cell phones and a probe on Mars. I think it’s because Science Fiction has fallen behind the Real Here and Now.

For example, Mommies command corporations in Real Life, but not starships in Science Fiction. It used to be that women yearned to fall in love, marry, and live happily ever after. The cultural expectation was that she became non-sexual once the first sperm hit the first egg. Meanwhile, it was acceptable for men to keep mistresses for sex instead. It’s called the Madonna/Whore Complex.

Nowadays, however, we know that women can enjoy sex throughout babymaking and motherhood, past Menopause, and all the way into their sixties and beyond. Did you know that Oxytocin, a hormone involved in great sex, is double-dosed to pregnant and lactating women? Think of all those new mommies who could have been having multiples (talking O here, not twin babies) if they only had the support they needed during that time of their lives!

A woman can fall in love at any age and stage of life. The readers have learned there is so much more to Womanhood than our culture previously thought, but Science Fiction and Romance (to a lesser degree) have not kept up. I believe Science Fiction Romance is the ideal vehicle to forge this new path, but Susan Grant is the only author I know of who can and does carry it off. And no wonder—she’s a Mommy and an airline pilot, as well as a novelist.

My point is there could be a LOT more SFR readers than there are right now. Did you know most girls have their love of science peer pressured out of them by Junior High? This means future SFR readers have little to build their interest on and most will be turned off to SFR by the time they’re old enough to read it. Now, if there happened to be Science Fiction Romance novels in the New Releases which were also Sweet or Mildly Sensual, I could recommend them to teens and there would be that many more readers for the rest of SFR in five years’ time.

I don’t make these observations to be snarky and criticize Science Fiction Romance. Far from it. I want SFR to grow because I love it. I also realize my observations don’t always match up with what the publishing industry believes about readers and I’m nobody to them. I doubt SFR will change much in the coming years, but I do hope it grows anyway.

There is greater variety of SFR when a reader includes eBooks and Small Press, but a reader who wants to avoid Highly Sensual or Erotica ought to go searching through the greats like Anne McCaffrey and Marion Zimmer Bradley and any of the authors before the 1990’s, I’d guess, which Heather has posted to the left. Most of these will be bought at used bookstores or borrowed from the library, which means no New sales for SFR. Hopefully, it will at least grow the interest in SFR as a whole.

Once I’m through my current stack of ARCs, I plan on focusing on the authors who paved the way. Also, there is a lot of Science Fiction with strong romantic plots and many don’t go over a Mildly Sensual Heat Level. The following link might be helpful: www.romanticsf.com.

I think it would be helpful to create and post Booklists, recommending SFR-type novels which include stories outside the popular-though-narrow demographic I described. If you know of any SFR with a Sweet Heat Level for example, recommend it to the list! Know of a novel with a gorgeous black man as the Hero? Let us know! Help your fellow SFR readers find the books they will love.

Thanks for inviting me, Heather. You’re a sweetie.
;)

TGE: Kimber An, the pleasure is all mine!

Now, I open the floor to you, my progressive passengers. Chat up a solar storm with your thoughts, and don’t forget to stop by Enduring Romance or Star Captain’s Daughter to give Kimber An a big wet one from me say hello!