I’m betting Stanely G. Weinbaum never would have predicted that nearly 70 years after the publication of THE BLACK FLAME we’d be chatting about his work on a blog devoted to science fiction romance.

Well, a few years ago, I wouldn’t have predicted I’d be blogging about a writer who blended romance and science fiction way back in the 1930’s. But when I first learned about his work, I thought it all very mysterious and exotic, and I think you will too. 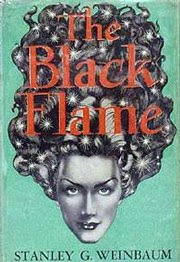 That’s a dynamite cover—and whatta title! Exactly who is the man behind the flame?

Stanley G. Weinbaum, aspiring chemical engineer/English major/author, worked for years honing his craft, even departing the University of Wisconsin in Madison under scandalous circumstances to devote more time to his writing. Persistence and talent paid off, however, leading to several published romance novels under the pen name Marge Stanley (and I know many readers of this blog can relate to that arduous journey).

And yes, you read that correctly: Romance novels.

Though Weinbaum made his mark with SF short fiction, he also penned three novels. Unfortunately, tragedy followed. As is cancer’s wont, the illness struck down this great storyteller in an untimely way, but his legacy lived on. All of his science fiction books were published posthumously.

Stanley G. Weinbaum’s modernist style, ability to create sympathetic alien characters, and fearless exploration of intimate adventures ensured him a place as one of the great pioneer genre authors—in fact, one could call him the Father of Science Fiction Romance. 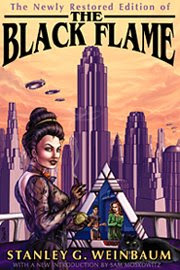 SHE RULED THE WORLD, BUT NOT HER OWN HEART! Margot of Urbs and her brother were brilliant scientists and immortal tyrants who had stopped Earth's decline back into savagery after a devastating series of wars. But their harsh rule, designed to eradicate those who would destabilize the Pax Urbana, had earned them many enemies who were determined to revolt at the first chance.

Then a man from the past awakens and changes the balance of power, for he joins those who are determined to rule against the cool, imperious, raven-haired Margot, also known as the Black Flame. But, instead of hatred, the two spark flames of romance when the meet. What Margot does not know is that he intends to betray her and her brother at the first opportunity.

I mean, wow, doesn’t that sound like jacket copy from a currently published book? Well, okay, the jacket copy was probably written recently, but the story still resonates even in today’s market (although to really enjoy it, you may want to temporarily suspend your 21st century sensibilities).

In 1997, Tachyon Publications released a restored version of THE BLACK FLAME, which had originally faced a stumbling block on the road to publication. From the publisher’s Web site comes this tidbit:

When The Black Flame was first published in 1939, Stanley G. Weinbaum had already been dead for three years. By that time, over 18,000 words had been excised or edited from the original manuscript. The intact manuscript, held by Sam Moskowitz, was auctioned off to Forrest J. Ackerman at the First World Science Fiction Convention in 1939. It was subsequently stolen from his collection and never recovered. The publication of this edition was made possible by the discovery of a carbon copy of the manuscript in a trunk of Weinbaum's papers found in the basement of his grandson's house in Denver, Colorado. 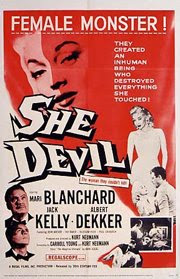 Here’s another neat factoid: Weinbaum’s short story THE ADAPTIVE ULTIMATE inspired the 1957 film SHE DEVIL (with the eye-rolling tag line “Gorgeous demon! They created an inhuman being who destroyed everything she touched! The woman they couldn't kill!” Mr. Weinbaum, we’re sighing for you). But somehow, had he lived to see the celluloid creation, I think he would have enjoyed it.

Here’s a few other links to informative pieces about this groundbreaking author:

Here’s a link to his complete bibliography.

At The Thunder Child, you can read the Interview with Robert Soubie: Translator of Stanley Weinbaum into French.

So why not check out the work of Stanley G. Weinbaum today? Let’s keep the flame burning!