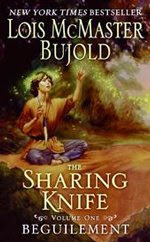 During her Writer Guest of Honor Speech at Denvention 3, the masterful Lois McMaster Bujold discussed the challenges of blending SF and Romance (thanks to Sbarret at Tor.com for the link to her Myspace transcript of said speech). Actually, it involved more themes than that, so please take a moment to read it if you haven’t already. Excellent stuff.

Naturally, that inspired this post. Let’s analyze the topic further.

A reframe of the issue is in order

Is SFR doomed to such dissonant plot elements? Of course not! (But you knew I’d swing that way, eh?) Note also Bujold’s choice of the word “seem.” Are the “fantasies of love” and “fantasies of political agency” arm-wrestling—or wrapped in a passionate embrace?

Ms. Bujold goes on to explain how she integrates the two in her work: "My solution for The Sharing Knife was to align the two levels by making the central characters be each a representative of their respective and conflicting cultures."

Sounds like pretty intriguing reading to me. Story structure has much to do with how readers perceive the two elements. Done well, the integration is seamless.

Then there are stories where the hero or heroine must choose between love and politics, and the future of both the relationship and an entire world could hang on the decision either one makes. These are just a few examples of why SFR works rather than why it doesn’t work.

SFR: A unique breed of readers

The two opposing genres may also be doing different psychological work for their readers. With its YA roots, SF runs heavily to coming-of-age tales, where the principal work at hand is separation from the family and growth to empowerment…but the end-game of those [Romance] tales is one of integration, rather than empowerment as such. The themes of later adulthood generally run to neither empowerment nor integration, but redemption.

Once a person tries a blended genre story and discovers satisfaction instead of disorientation, it’s an indication that a perceptual shift has occurred. This isn’t unique to SFR fans; but it’s unique to readers who actively seek out stories that blend genres (e.g., fantasy romance, SF horror).

Though the psychological underpinnings of SF and Romance may differ, SFR readers seek out the areas where SF & romance intersect and complement one another. For example, Ms. Bujold stated that SF involves “coming-of-age” tales. Part of this particular developmental process involves meeting certain needs, and according to Abraham Maslow’s hierarchy of needs, one of those is love/belonging.

Therefore, many SFR stories target and exploit the falling in love phase of the coming-of-age process.

And how often have we encountered the theme of love being an agent of empowerment? That’s another angle SFR authors exploit, and if we examined our favorite stories, I’m sure we’d find others.

Additionally, science fiction romance readers have a different set of expectations. They expect the political elements and the romance to interface and that this process will happen differently for each story. They don’t require that either element is dominant at all times.

SFR readers expect that when the political hovers the romance will move to the forefront and vice versa. Occasionally the two run a tight parallel, because what happens in the political sphere often impacts the romance. For SFR readers, this shift doesn’t create impatience with the story or cognitive dissonance. In fact, it raises the stakes.

I propose that the “psychological work” of SFR meets the need to explore stories that demonstrate what happens when our need for love and belonging are threatened by external (“political”) forces. So if someone asks you “What is science fiction romance?” you can tell them it’s fantasies of love against all odds. 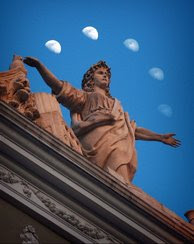 SFR readers embrace the juggling act of these blended genres. Potential SFR readers have a choice as well: They can alter their expectations about fiction categories. They can do this despite (often necessary) limitations that accompany issues like shelving and distribution. Within one’s mind, there is no need to define a book as “only” SF or “only” romance or “only SFR.” A book can be SF with romance and mystery, for example. Many times people read blended genres without being overtly aware that they are.

Another factor that determines how well the genres blend depends on the scope of the story. Trying to tell a sprawling space opera epic plus a deep romance in 300 words might be doing the story—and readers—a disservice. On the other hand, some stories thrive in that word count if the scope reflects a narrower premise. So it behooves SFR authors to tell the right amount of story given word count limitations—or freedoms. (Naturally, books in a series have more flexibility with both story and romance arcs.)

In the end, we can break down these elements until the nanobots come home, but a well crafted science fiction romance story doesn’t even come across as a juggling act—it’s just darn good fiction.