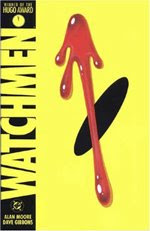 Who watches the Watchmen? You should. And here’s why.

In 2006, TIME listed WATCHMEN as one of the 100 greatest novels of all time. WATCHMEN is also the only graphic novel to win a Hugo Award. Now, 23 years after this groundbreaking story hit the stands, Zack Snyder of 300 and the DAWN OF THE DEAD remake is helming the big screen adaptation. The recent release of the movie trailer alone prompted DC Comics to release 200,000 more copies.

Bu what is WATCHMEN? In a nutshell, it’s epic. It’s heartbreaking. WATCHMEN is the comic book miniseries that changed the mainstream press’ low-brow view of comics and helped pave the way for more adult fare, including DC’s Vertigo line that includes PREACHER, FABLES, and of course Neil Gaiman’s SANDMAN.

Trust me when I say that the book may well rank right up there as one of the 100 greatest works of fiction you’ll ever read, too. (In other words, yes—for once—believe the hype!)

Here’s the brief but excellent summary at Wikipedia. (Beware of the spoilers, though.)

But there’s one very important detail that the article (and most who review the graphic novel) omit: WATCHMEN contains a romance—one that’s both realistic, layered, and hawt. Clearly, legendary author Alan Moore & artist Dave Gibbons were onto something.

Now I’ll admit that you don’t want to read WATCHMEN just for the romance, although I couldn’t blame you one bit if you did! This sober, complex tale is an example of what happens when literary fiction and fine art collide with the graphic novel medium.

WATCHMEN is rife with political conflicts. But it’s also loaded with action and adventure, angst and anger. It challenges the reader to confront her beliefs and darkest desires. 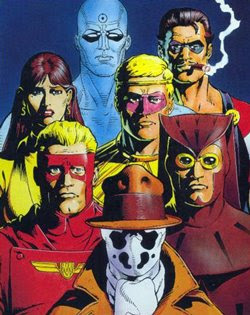 But back to the romance! As I was preparing this post, I suspected that in all of the hoopla surrounding the trailer’s release, there weren’t many sites or blogs devoted to the romance subplot in WATCHMEN. Guess what? I was right. A thorough Google scrubbing of the entire Internet revealed practically nil.

I did come across this passage however, excerpted from an academic essay posted at Shotgun Reviews (warning: the review itself contains spoilers ):

"From utter destruction to the beginning of life, Watchmen confronted the actual issue of sex with a frankness that most mainstream comics had never seen before. Most Americans would never realize that a comic book could portray a realistic, adult, sexual relationship, but Moore brings off the attraction and eventual romance of [Daniel and Laurie] tremendously."

“Most Americans” is right, and my condolences on their loss. I’d add that the execution of the relationship dynamics portrayed in WATCHMEN rivals anything found in any romance novel past or present.

Having said that, stay tuned for the next post to hear about what the romance industry—and readers—could learn from this graphic novel opus....