I had a dear friend visiting me recently. She’s a huge Vin Diesel fan and I love Sci-Fi, so we rushed off to the drive-in, eager dollars clutched in our sweaty hands to see BABYLON A.D. Take a look at the trailer.

BABYLON A.D. stars Vin Diesel as, Toorop, a jaded mercenary, stranded in the dreary and desperate Eastern Europe of 2019, who dreams only of returning to his childhood home in Upstate New York. He gets his chance when a wily mobster, played by Gerard Depardieu, offers him a job transporting a mysterious package to New York City. The package turns out to be the innocent and child-like Aurora (played by the very lovely Melanie Thierry), and accompanied by her guardian nun, Sister Rebecca (Michelle Yeoh).

After an action packed start through the frozen wastelands and iniquitous dens of the future, the trio save each others lives a few times, while being pursued, betrayed and shot at. 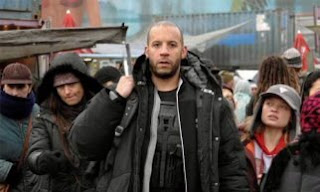 [SPOILER ALERT...for those who care] Aurora turns out to be something other than what she appears, though I’m not quite sure what exactly she turns out to be. Sister Rebecca turns out to be a nun who can kick some serious butt, and Toorop reveals that he actually has a heart. Then Aurora’s evil mother (Charlotte Rampling) shows up and yells a lot. Toorop dies, but is brought back to life by a guy in a wheelchair. Aurora demonstrates the ability to survive point blank bombing, but still manages to die in childbirth. Poor Toorop gets stuck with the twins that aren’t even his own. The End.

If you’re thinking my synopsis is a bit of a mess – you’re wrong. That is EXACTLY how the movie played. I spent the final third of the movie exchanging confused glances with my friend and hoping that it would all become clear in the end. It didn’t.

Director, Mathieu Kassovitz, has publicly lambasted his own movie, calling it “pure violence and stupidity…like a bad episode of 24,” and has laid the blame on Fox’s doorstep, claiming that they took the movie and edited all sense out it. Fair enough.

The editing, especially of the final third, is an absolute disaster – rushed, confusing and just plain dumb. But Kassovitz, by distancing himself from the end result, isn’t being quite fair. He has to take his share of blame for the end result – it wasn’t just the poorly edited ending that made this film such a waste of my time. 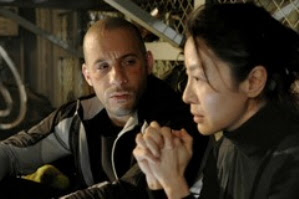 Whose fault is it, for instance, that Vin Diesel delivers his lines as if he’s on an hourly dose of Quaaludes? Um – the director’s? Who made the decision to film the glorious Michelle Yeoh’s fight scenes in close-up and in the dark? Um – the director’s? Who allowed veteran (and extremely talented) actors, Gerard Depardieu and Charlotte Rampling, to chew the crap out of the scenery in their attempts to steal the movie? Lemme see – the director? Who thought the scene, in which the child-like Aurora and the very much grown-up Toorop almost get it on, would come across as anything other than very uncomfortable? Mr. Kassovitz? Who is responsible for the clunky and cliché-ridden dialogue? I suppose I have to blame that on the writers. Oh, lookee here – Kassovitz was one of the writers. And isn’t there supposed to be a producer riding roughshod on the creative talent? Again, Kassovitz is listed as co-producer.

It seems to be that this director is being very disingenuous when he lays the blame for this failure at someone else’s door. Stand up for your movie, Mr. Kassovitz! I mean - it sucked – but at least I’d still respect you if you were taking your share of the responsibility. Or you could even be defending it.

Take a page from director Uwe Boll. He’s been called the “Modern Day Ed Wood,” amongst a few more less polite monikers. The guy shoves one cinematic crapfest after another right out the door. (His last few movies average a stunning 2.6 on IMDb.) But, Herr Boll defends his crap with righteous indignation. In fact, he even challenged any ersatz Ebert to show up in the boxing ring where he would proceed to pummel him. Everyone thought it was a joke, but Boll—true to his word—really did show up and obliterated his challenger! I can’t see Spielberg doing that. 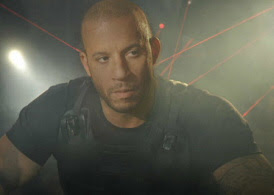 Kassovitz could take a page or twenty from Boll’s Teutonic book: Defend your baby, even if it isn’t the cutest in the crib. Having said that, BABYLON A.D. does have some cool stuff in it.

The first third of the movie hooked me big time, the action sequences were great, and I loved that you were using some excellent stunt people, instead of over-relying on the CGI wizards. Your leading man is a helluva sexy guy, your ingénue was a delight, and you hooked the uniquely talented Ms. Yeoh, as well as some other outstanding performers to act in your passion project. The sets and look of the film were great. I loved the setting – it was such a refreshing change for a Hollywood movie not to be set in the U.S.

There seemed to be a great story in there – somewhere. I wouldn’t even be annoyed enough to write about this film if I didn’t feel that it could have and should have been so much better.

Oh, well. I suppose I could wait for the director’s cut – if you ever get to do one. Somehow, I doubt it. Oh, I know what I’ll do. I’ll read the book instead!