*Drum roll* After greasing the gears in our retired effluvium engine, it hath proclaimed:

* お祝いの言葉, Thea, you’ll soon be crossing the skies with a copy of STEAMBOY!

Winners, please email your name and address to sfrgalaxy “at” gmail.com, posthaste.

Many, many thanks to everyone who entered the drawing and for all who commented during our steampunk extravaganza. I also wish to acknowledge everyone who visited and/or linked to the features.

And, if this was your first time on The Galaxy Express, I hope you’ll join our merry crew again on future journeys. There's a vast pool of uncharted space ahead of us, and we're just getting started! 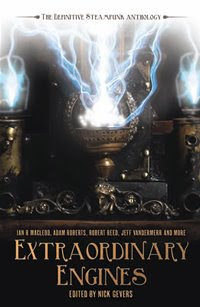 During this time, so many folks offered suggestions for steampunk gaiety that I decided to top off the week with their contributions. Believe me, no one will bat an eyelash if you fatten up on these wonderful desserts:

Over at The Walrus Said, Janet reviewed THE ALCHEMY OF STONE by Ekaterina Sedia.

Author Gail Carriger reported that her steampunk tale is due out in November of 2009 from Orbit.

Cherie Priest posted on her Web site that she has two, count ‘em, two steampunk books coming out: THE BONESHAKER (2009, Tor) and THE CLEMENTINE (2009, Subterranean Press).

Adrienne Kress is also working on a steampunk flavored project.

While perusing the latest ENTERTAINMENT WEEKLY, I ran across a review for IGOR, a steampunk fantasy film from MGM. 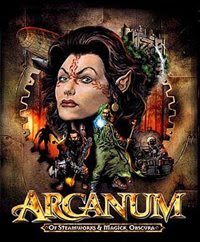 Fantasy Debut’s Tia Nevitt passed on info about a cool videogame ARCANUM whose tagline is “Of Steamworks and Magick Obscura” (gave me goosebumps!).

Debut SFR author Jess Granger pointed out that Disney’s ATLANTIS offers a rainbow of steampunk elements, as does the videogame SYBERIA.


Lastely, after this week’s showcase, if you’re now hopelessly enamored of steampunk, you can join The Gaslamp Bazaar and immerse yourself to your heart’s content.

As for now, strap on your safety harnesses as we set course for the planet Osiris. I heard via the galactic grapevine that next week, Agent Z is going to make a drop here at The Galaxy Express. Because of radio interference the message was garbled…all I can tell you is that it involves a recent science fiction film with romantic elements and some guy whose name sounds like “Tin Weasel”...?!