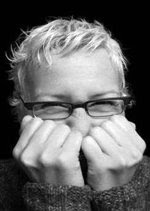 Nathalie Gray is the author of eight futuristic/science fiction novels, and she plans to take over the world one reader at a time. A 2007 Romantic Times winner, she writes action packed stories with gritty, flawed heroes and heroines. Dark, comedic, and sometimes darkly comedic, she'll transport you to a roller coaster ride of a future.

And pssst…I know some juicy details about her! Check this out—she has a hopeless crush on Chow Yun-Fat! (Click here—later, of course!—to learn more about this iconic Chinese action star. You won’t regret it.)

This globe-tripping author is a rabid fan of R.A. Salvatore. But SF/futuristic is her favorite genre so click here to read about her path to publication and how she goes all gooey over SOYLENT GREEN. Nathalie Gray is also a guest blogger at Alien Romances. Her debut post was A Long Time ago, in a Galaxy Far, Far Away…MY ASS!

I recently had the pleasure of interviewing Nathalie in the Phantom Café with a stellar view of Barnard’s Star and let me tell you—I simply could not look away from her silver go-go boots. So I’m sure it was a decidedly surreal experience for Nathalie as I asked the questions while my gaze remained glued to her footwear.

But, since she had Roberto Baggio sprawled across her lap, I think it all worked out in the end.

The Galaxy Express: Please describe your writing voice, but in the form of a recipe.

Nathalie Gray: Oh, it'd have to be a cake! Let's call it "Nat's Love & Rivets Cake". And it'd go something like this:

* A stick of (enter onomatopoeia of choice)

* A good three fingers of rum (gotta have rum)

* Show to friends, squee, then enjoy

Wake every day and rummage for ingredients to make another cake. Then another and another... 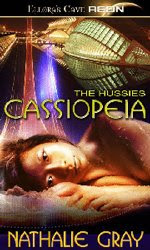 TGE: Your books contain exhilarating adventure, spicy sexual tension, and inventive worldbuilding. Great stuff, but speculative fiction also explores the grand “what if?” ideas. What are some of the deeper themes you explore in your work, whether you knew about them going into the stories or not?

NG: Everyone has their own interpretation of a story's themes, whether it was the author's intent to explore them or not. I think redemption is one theme to which I often find myself drawn. I dissolve in a blubbering pile of Jell-o when I read (or watch) a story where the villain does this one thing that triggers a positive resolution, often to his/her own destruction. 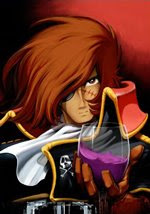 Ha! Sorry, but Jack wouldn't stand a chance. Harlock would wipe the deck with Sparrow's bandana/wig combo, would give him The Evil Eye (because incidentally, Harlock wears an eye patch that raises his Cool Factor high enough to require oxygen masks) and after destroying Sparrow's puny ship would sit pensively in a dark place while brooding and playing his ocarina. Captain Harlock, he's that good.

TGE: What is the most challenging aspect of writing a sex scene? The easiest?

NG: Me, I'm all for in medias res—starting the story in the middle of the action. BOOM baby. Life is short. The reader trusts you to get to the point before they die of old age. As for sexual tension I think what's omitted is unbelievingly sexy. I love when an author creates a mood then lets things sink in, lets the sprinkling of fairy dust settle. What I found challenging at first was slowing the action down to explore the intimacy between the characters. I was afraid to lose momentum, let the iron cool. There was a space station to blow up! A world to save! But because I'm lucky to work with the best, I've learned to use these special moments of tenderness and discovery to further the overall goals. Namely, destroy the baddies and finish together. 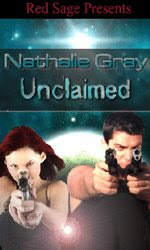 TGE: What are a few of your favorite science fiction romance books, films, and television shows?

NG: So many titles, so few years to my life. A distillation of what makes my inner Chihuahua chase her tail with savage glee is:

Books – Dorchester's Shomi line, the Durham Red and Kris Longknife series (although I often have to add the romance myself as I read *sigh*), Linnea Sinclair, Susan Grant, John Scalzi, Richard Morgan when he's feeling gentle (or gentler). 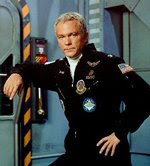 TV series: Albator (or Captain Harlock for the Anglo-Saxons in the crowd), Lexx, Space: Above and Beyond because I had a serious crush on the handsome colonel Ty, the new Battlestar Galactica, Babylon Five and its spinoff Crusade, Firefly.

What, we're out of time already? Damn.

TGE: After you achieve galactic domination, what’s next?

NG: You're right, world domination is only the first step. But I wouldn't be much of an Eeveel Overlordess if I shared the details of my plan of Doom, now would I? Suffice it to say that places like Galaxy Express, where the luv and the kinetic energy guns are welcome and celebrated, would receive a substantial gift in the form of cabana boys in silver thongs (or not), unlimited supplies of books and The Perfect Reading Chair. That's how much I love you!

TGE: That’s very sweet of you to say! Is there anything else you’d like to share about your work?

NG: Love and rivets aren't mutually excluding. You'll find both in any of my stories, from my tortured and scarred heroes (and those who are fashionisti), to my irreverent heroines who talk too loudly or curse a bit too much. They love as hard as they fight and as rough as they play. Life is too short for half-measures. You can find my books online and in bookstores, from (so far...please refer to previous question) my most excellent publishers Ellora's Cave and Red Sage.

Come on. Don't be shy. Come visit me at www.nathaliegray.com 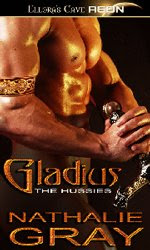 Nathalie Gray’s GLADIUS will be released this month on November 26:

In a faraway colony crushed by tyranny, only the strong survive. His cardinal rule is simple. What Dar Skara wants, Dar Skara takes.

And here’s a great gift idea for the science fiction romance lover in the family: The author’s forthcoming release, CHIMERA, will be available in December 2009.

Nathalie, I had fun chatting, and thanks for your art!