Chest Hair, Mustaches, and Beards...Oh My!

Earlier this year, I was discussing Linnea Sinclair’s FINDERS KEEPERS with a fellow fan. Rhis, the hero of the tale, sports a mustache (and a fine one, I might add). My friend wasn’t too keen on it, but something about it struck me. I further reflected that done well, a hero’s mustache or a beard can be just as sexy as his taut buttocks.

Anyhoo, the more I thought about Rhis’ mustache, the more I wondered about why we don’t see mustaches, beards, or facial hair more often on romance covers. It began to downright irk me since I’m a fan of the natural look. Chest hair especially embarks me on a tour of wild speculation about a man’s virility, strength, and maturity.

Take a look at the new cover: 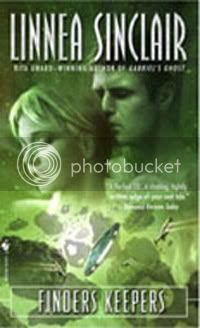 Hey, wait a minute! Where’d Rhis’ mustache go? Did he suddenly rush out to shave? At least with the original cover, I could pretend he had one despite his back facing the reader.

But now check this out: Here’s the cover to the earlier version of FINDERS KEEPERS—Rhis has a mustache! And—despite the awkward 3D Studio Max render—it looks great! (lurv the uniform, too). 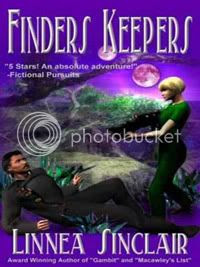 Covers by Bantam utilizing models don’t portray mustaches because they could potentially date a book, as Linnea Sinclair so informatively informed me in the comment section of a past post. Of course, with a science fiction romance, it won’t be dated for at least several hundred years or so, so why not go for broke? I jest, but even though I understand the reasoning, it doesn’t mean I have to like it. Honestly, is there a real concern someone would design a 70’s throwback a la Burt Reynolds or the Village People?

But indulge me for a moment. What if we routinely had covers with heroes endowed with a more natural look? Don't they still have mustaches and beards?

Or, is the future completely different here?

Waxy, glossy, smooth—these are the words denoted by many a half-naked man on romance covers these days. Publishers might as well stick a waxed apple on the cover—it’s that fake looking at times. And when it comes to science fiction romance, I don’t buy the metrosexual-in-space angle (unless, of course, the hero is a metrosexual in which case it’s all well and good).

Is it just me, or is there sometimes a disconnect between the hero on the cover and the hero in the story? I don’t remember the last time I read about a hero’s smooth chest when the cover depicted a waxed and buffed hero (but to qualify, my tastes run to historical romances after SFR, so perhaps my experience is skewed by my preferences). With a story involving a rugged, earthy hero, it’s jarring to experience a marketing maneuver that is so at odds with the product. That aspect makes it difficult for me to become invested in covers, as well as increasingly immune to said maneuver.

When I read a science fiction romance, I read it for the story first, and the fantasy aspect second. So if a few covers must include half naked men, at least render them with details truer to the actual hero, pretty please. The whole package ties together much better that way.

Smart Bitches kicked off a discussion along these lines in Crispy, beginning with a lookee at the cover for Kalen Hughes’ Lord Scandal. 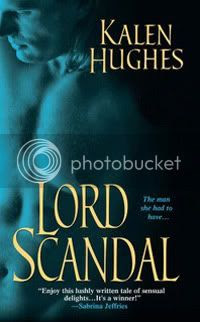 The consensus pointed toward a call for more chest hair, and you can count me in. A sprinkling of covers with heroes sporting facial hair are fine, too. Make sure it’s on the model, though, to avoid incurring a Little Photoshop of Horrors.

What are your thoughts on this admittedly hairy subject?