Day Two of our marketing week poses the heady question, “How does one effectively promote a niche genre?” Answering this, however, may first require a bit of reorientation—a reboot of previously held ideas.

To wit: Science fiction romance is a niche genre in the publishing world. This is true. But that description needn’t be held in a pejorative light. In fact, I see it as an opportunity.

By the very fact that SFR is niche at the present means that it offers a vast repository of unmined materiel to exploit. (That’s a good thing.) Its blended nature also connotes the welcoming feeling of familiarity to science fiction as well as romance readers. (And that’s a great thing!)

SFR’s untapped potential + commercial appeal = the best of both worlds.

As an endless series of remakes of sequels to other remakes hit the big screen, and the umpteenth vampire/werewolf paranormal trots out on bookshelves, the time for something fresh in entertainment is ripe.

But trying to market a property that’s too original bears its own albatross, too.

Selling Niche To The Public...

Unless products couch the exotic in a familiar package, the general public tends to scratch its collective head and walk away. As an example of this, look no further than the box office receipts for the average David Lynch film.

It’s sad that a big budget movie like THE FLINTSTONES IN VIVA ROCK VEGAS can bring in over seven times the amount of BLUE VELVET at the box office, but those are the facts. Fred and Wilma had some serious marketing cash clout and exposure backing them.

Despite this, it’s important to bear in mind that it’s the latter film that made money, while the former lost it. In fact, all Lynch films earn their money back and make profits.

Continuing this film metaphor, SFR stands poised and ready to be our JUNO—clever enough to stand out in the crowd, but not so niche in idea and scope that it can’t earn money.

And therein lies part of the promise of a niche market—fulfilling a need that isn’t being met: The ultimate goal of any commodity. Let’s explore this issue more deeply. 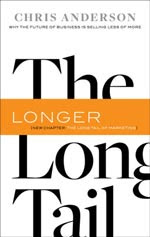 In Chris Anderson’s book, THE LONG TAIL: WHY THE FUTURE OF BUSINESS IS SELLING LESS OF MORE, he argues that current technology, mainly the Internet, essentially throws out the long held Pareto Principle (i.e., the “20/80 rule,” which asserts that 80% of sales arise from the top 20%). This is the model that drives businesses (and certainly publishers) to strive for only home runs.

After all, B&M book stores possess limited shelf space, and they would rather devote that valuable real estate to a few more copies of J.K Rowling or Nora Roberts than an unknown author or unproven genre. The other 80% is there either for the occasional sale (think: holidays) or as window dressing (a bookstore with only a few hundred stocked books just wouldn’t look or feel right).

But here’s one problem with that paradigm: Sometimes the “sure thing” isn’t always so sure (paging Dr. Kaavya Viswanathan).

Further compounding the issue, so few books actually sell. Depressing fact alert: According to Nielson BookScan, only 2 percent of the 1.2 million unique titles sold in 2004 had sales of more than 5,000 copies. A staggering 98% hardly budged. Couple this continued environment with the current economic malaise, and you have continued flat sales in this extremely mature business. People get excited about new, sexy things. MP3 players/smart phones currently represent this; 15th century Gutenberg technology does not.

That’s where the strength of the Internet comes into play and usurps the old way of doing business. Places like Amazon and ebook retailers aren’t so restricted in space; in terms of the latter, it’s limitless. These vendors can offer far more than the top 100 bestsellers. And guess what? The demand for more niche genres can be huge.

Huge…and often ignored. Publishers ignore this at their peril.

In THE LONG TAIL, the author makes several surprising revelations:

* A digital music provider tells how a whopping 98% of the albums in his inventory sells at least one track per quarter (and this was in 2004, a time of far fewer MP3 players). Others suggest this figure is in line with books sales on Amazon (page 7-8).
* The documentary is one of the best renting genres through Netflix (page 182), despite the fact that a breakout hit like SUPER SIZE ME earned less than $12 million at the box office.
* Profit margins for publishers increase—sometimes greatly—as products move farther down “the tail” and into the niche category (pages 132-134). This is the inverse of the Wal-Mart model of only offering the top selling products at low margins, and provides a clear way to compete against the big guys.

Niche Isn’t As “Niche” As It May Seem

This isn’t to disregard the sales at the “head of the tail.” The “head” and “tail” work in tandem. Naturally, your HARRY POTTERs and DARK KNIGHTs of the world are going to remain the prominent revenue generators. But those properties remain few and far between, and require a huge financial push by the publisher/distributor for marketing.

I once recall catching the following cogent point, made by an unnamed industry insider: “Think you’ve written a bestseller? Great. But do you have a well-connected publicist? Do you have several million in marketing behind you? No? Then guess what, you don’t have a bestseller.”

Yes, those words lean to the pessimistic side—as there are a few exceptions—but the point does resonate. Marketing is just as important, if perhaps even more important, than the book itself when it comes to selling. Just ask any popular fast food place. A staggering 96% of U.S. schoolchildren can identify Ronald McDonald, according to Eric Schlosser’s FAST FOOD NATION (page 4). I ask, is this a result of the high quality food or the wily clown’s unrelenting marketing? Quality alone isn’t enough.

However, quality content accompanied with equally superlative marketing can greatly increase a book’s chances of success. Now on the surface, this statement above may seem obvious when presented as such, but it demands print as I often see real-world accounts where the marketing is all but ignored. More on that later in the week.

This brings me back to niche markets….

Why Not Beat The Crowds?

Even if you’re an author who’s 100% gung-ho on getting your book out there, how can the average first-timer stand out from the crowd? You’re up against paid endcaps, discounts, and ads from the big guys (Forget David vs. Goliath. Think David vs. Galactus!)

It’s akin to staring down high tide with nothing but a broom to protect your sand castle. Unless you move away from the ocean, that is.

Sure, the crowds may be at the beach, but so are the waves, hovering perilously over your meticulously constructed art. Why not separate yourself and stand out? If the beach is the “head,” think of the “tail” as a boardwalk stocked full of various attractions. That smorgasbord of entertainment offers its own set of rewards as well.

Boiling It All Down:

Everyone has both mainstream and niche tastes in some category; one could watch a summer blockbuster film followed by a meal of exotic ethnic fare. Readers can enjoy Stephen King and then move onto Suehiro Maruo. In marketing terms, it “funnels down.”

Both of these examples hinge on the alternative being available, however. In the case of the former, a Vietnamese Phở restaurant isn’t located everywhere; but the Internet can deliver even the most outré works to the Outback.

I’m talking about ebooks, and we’ll cover this topic in Day 3.