Day Three of 1001 Ways To Promote SFR picks up where Day One and Day Two left off. So let's dive right into it!

We’ve all heard the arguments against moving to ebook readers. The most salient being, “it’s just not the same.” Of course it’s not the same, and print books aren’t going away anytime soon. Yet it’s possible for both to coexist peacefully.

However, there are pros and cons with each, so let’s take a look at how the formats differ: 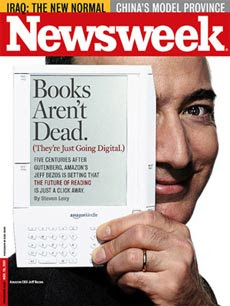 The cost of paper and printing seems to soar to new heights every year; this doesn’t affect e-readers.

Physical books require paper, paper requires planetary resources, and resources require money. Other than the initial construction material and transportation for the device itself, e-readers thrive off only 1 and 0s. Which leads me to…

…the limited storage space for physical books. I don’t know about you, but I have books piled everywhere. And unless I can persuade an errant Time Lord to share the secret of dimensional transcendentalism with me, my house remains smaller on the inside than the outside. As an alternative, cheap, large capacity flash memory cards are commonplace now—and 16GBs can store more books than I could possibly read in a decade.
A physical book’s font is fixed; an e-reader’s font can be as small or HUGE as you like.

A physical book’s copy isn’t searchable, while an e-reader can locate the exact page where Rochester and Jane Eyre first meet in less time than it took you to finish this sentence.

And finally, lest we forget, there’s an entire library of public domain ebooks yours for the taking—FREE! Sure, some may have been written decades ago—if not several hundred years—but somehow LADY CHATTERLY’S LOVER just became that much hotter when it’s 100% gratis.

Note: Publishers should NOT fear this, as I know the classics are still big sellers. Free public domain ebooks can serve as an introduction to e-readers, which will only spark an appetite for more recent books—i.e., serve them up as the gateway drug for the literary world.

Then there are promotions such as Orbit’s new deal: “…an ebook a month for just $1.” (Thanks to Angela James for the link.) And don’t forget the Baen Free Library!

Hmm…so everything’s super cool and we should all run right out to buy e-readers, right? Hold on there, mon ami. Everything isn’t completely dandy just yet.

The current prices for an e-reader are probably the biggest hurdle for most people.

As of this date, the Kindle runs $359 USD, while the Sony 700BC Reader is $399, and the iRex iLiad is a wallet-bustin’ $699. Methinks you’re going to have to read a LOT of free/low cost ebooks to compensate for the initial cost for one of those.

As with all gadgets, these prices will, of course, drop over time as technology improves, but we’re talking about the here and now.

Aside from the prohibitive cost though, there’s another issue…and it’s a biggie. 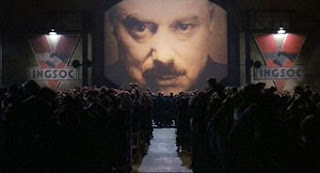 Waiting in the wings lies the lurking specter of Digital Rights Management (DRM). This thorny issue could consume the entire week’s worth of posts, but succinctly put: The powers at be ostensibly place DRM in their media to limit—or prevent—copying or sharing (or printing or whatever else someone decides). But really, it’s there to retain control of the material you purchased.

Ever since Napster rose so meteorically and flung open Pandora’s file-sharing box, most content publishers (mainly the RIAA & MPAA) break out in a very cold sweat when someone utters the word “Internet” in their vicinity. It needn’t be this way, however.

I believe most reasonable people think that authors, artists, and filmmakers should be rightfully compensated for their work. (Somehow, I doubt those who disagree work a 40-hour week for free.) The creators/licensors rights should always be upheld and protected.

But on the other hand, if you buy something, it should be yours, Ms. Consumer.

You should be able to read your ebooks however you like, on any device you like—not have them tied down in a way that only benefits a specific corporation. This is what the Fair Use Doctrine is all about.

After all, a physical book won’t deny you entry into its intrinsic joys, just because you changed the dusk jacket or passed it onto a friend or family member. And photocopying has been possible for several decades, but we’re still buying books and publishers are still in business.

Heavy-duty restrictive DRM does little to stop the real pirates, the ones who are mass producing $5 street copies of THE DARK KNIGHT faster than the Batman himself can track them. It only annoys/confuses the vast majority of customers who aren’t crooks and don’t like being treated as such. 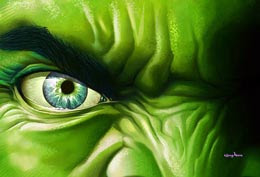 Ignoring this only causes confusion and anger in consumers—two ingredients that result in unsold inventory. Imagine if you had to match up Sony DVDs with Sony players; Toshiba DVDs with Toshiba players; etc. Silly, huh? That’s just one way DRM hurts and chases away consumers. There are others.

But If Some Form of Protection Is Needed, What’s The Compromise?

I personally don’t mind stepping into a large department store with the knowledge that my every move is being watched indiscreetly. Sure, it would be nice if none of this security were required, but that’s too Pollyannaish. It’s unrealistic to base a B&M business model around, “Pick up what you like and drop the cash in a bucket on your way out. We trust you!”

But if that scenario is too gullible, consider this one: Stepping into a store only to be escorted by an armed guard—someone who points a gun at your head, and tells you exactly what to look at and what to buy. After all, you’re just there to steal, ya crook.

Would you go back and patronize that place? Yeah, I wouldn’t either. And that, in a nutshell, is why most people hate DRM. It becomes that intrusive guard.

If readers are confronted with this nonsense on their shiny new e-readers, the majority are just going to stick with their dog-eared paperbacks of D.H. Lawrence.

When it comes to technology, people like it to work and be dead simple to use. Period. I fear that if more DRM appears on the ebook horizon, it may kill, or at least heavily stunt, the nascent industry before it has a chance to flourish. (Just ask the original DIVX how it’s doing. Great idea, Circuit City! Major props!)

But, a shining light at the end of the industry tunnel suggests corporations are waking up to this. 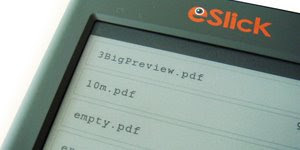 Foxit, known for its PDF software, just announced the eSlick, the newest foray into the e-reader market. At first glance, it appears to be a glorified PDF reader—that means no proprietary media formats. (It’s also $120 cheaper initially than the Kindle, although it lacks built-in WiFi.) Sony’s e-reader, the PRS-505, also provides native support for DRMless formats. Both provide a step in the right direction. While it’s possible to circumvent DRM with the Kindle, giving customers what they want right out of the box is what they really crave.

Amazon knows a DRM-less future is high on our wish list, too. It started touting their DRM-free MP3s for sale a few months ago. This, plus a higher bit rate (256) combined with lower prices and ease of use made their music store a formidable opponent against the ubiquitous iTunes. (Apple got hip to this and it’s now offering DRM free downloads.)

But why would Amazon make such a strong stance against DRM in one department (music) and not in the other (ebooks)? Competition for one is the answer. With over 6 billion songs sold(!), iTunes is the leader in MP3 sales. Amazon + Ebooks = a different story, however.

With the Kindle, Amazon appears to be king of the e-reader mountain so they probably feel more confident in their choices. I also suspect the DRM-laden ebooks at Amazon comply with demands made by some overly-skittish publishers themselves. (Tech scuttlebutt says that Apple has been wanting to move against DRM for some time but the music industry said no-no.)

But since the Kindle generates so much buzz, should Amazon and the industry worry? Yes.

There IS competition—in the form of physical books. And for the e-reader industry to compete against this, you have to offer something much more compelling to give print books a run for their money. Old habits die hard—and offering a completely different model that’s only 5% better won’t categorically change people’s way of buying books.

There’s Room for All

Of course, some readers will continue to invest only in print books. One doesn’t exclude the other. Vinyl records still exist and enjoy healthy sales to this day. (And oral storytelling is alive and well, thank you very much).

The publishing industry only needs to capture part of the overall market with ebooks to be a runaway success. And it appears to be working, as increasingly more readers are supporting both formats. This aspect represents a gain for authors.

Bottom line, it’s worth emphasizing that print and ebooks will coexist for some time. Niche genres like science fiction romance will need both to thrive.

Tomorrow, we’ll explore other changes the publishing industry should consider to reinvent itself for the 21st century. In the meantime, what are your thoughts on e-readers and DRM?