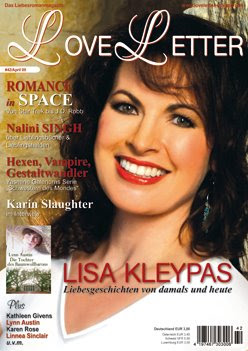 Remember how I’ve been hinting at an exciting new development in the works? Well, it’s here!

Once upon a time, in Germany of April 2005, intrepid romance fan Kris Alice Hohls released the first issue of LoveLetter, a monthly print magazine she founded that’s devoted to romance novels. Essentially, LoveLetter is the German equivalent of Romantic Times BOOKreviews.

It’s a true grassroots effort, organized by German romance fans eager to help connect readers with news and information about their favorite authors and books. Yet LoveLetter evolved into more than just a magazine. It ushered in an era of validation for readers and respect for the romance genre. The magazine’s influence increased both publisher and reader interest in the genre as well as becoming a mover and shaker in the European romance community.

In fact, Germany is “the second largest book rights market in the world after the US.”

LoveLetter quickly became a player, offering featured authors coveted real estate and exposure to German publishers, agents, and booksellers. In addition to its home country, LoveLetter is available in Switzerland and Austria, and is also followed by readers in France and Italy. Since the magazine’s inception, it has reached out to publishing industry professionals across the pond, making its presence known and networking in venues such as the Romance Writers of America National Annual Conference.

LoveLetter is an amazing achievement in and of itself. What more could Kris Alice Hohls and her team of journalistic superheroes possibly accomplish?

The esteemed Kris Alice Hohls contacted me, having followed The Galaxy Express for some time. I’m excited to finally announce that she invited me to write a monthly column for LoveLetter, with each article devoted exclusively to…wait for it…science fiction romance!

Naturally, I accepted! This collaboration represents an unprecedented opportunity, as it will immensely raise the visibility of science fiction romance both in Germany and to readers across the European continent.

There are also reviews and interviews, including one with debut science fiction romance author Katherine Allred (CLOSE ENCOUNTERS).

And that’s just the beginning…!

It’s my pleasure to present an interview with LoveLetter’s founder and editor, Kris Alice Hohls:

The Galaxy Express: How did LoveLetter come about?

Kris Alice Hohls: In my travels, I had come across magazines like Romantic Times and Affair de Coeur. Back in Germany, I looked for similar magazines. What I found were lots of frustrated German readers having to brush up on their English if they wanted to learn more about their favorite genre, authors and books. Like them, I waited for someone to start a German romance magazine. Nothing happened.

After a few years, I was unwilling to wait any longer. I began looking for a way to help promote a German romance conference in 2005, and I decided to finance and produce a small newsletter (20 pages in black & white). I handed it out for free and the reader feedback was very positive. Some of them liked the project so much that they decided to join me. With their help, the newsletter grew over the years into the magazine that now can be found at newsagents and in bookstores (52 pages in full color).

TGE: What kind of content can readers expect to find in LoveLetter?

KAH: As we are romance readers ourselves we offer what we’d like to read about:

* Interviews—mainly with authors, but also with publishing professionals and readers

* Short stories—although not very often, as we don’t have the space and are very choosy

Our readers are curious, passionate about the genre, intelligent, and unafraid to ask for what they want. And we try to grant them as many article/interview wishes as possible.

TGE: Who are some of the authors featured by LoveLetter in the past?

KAH: That is a very hard question to answer, as it would mean a very long list. We’ve been very fortunate with all the support we’ve been given over the years. Kresley Cole, Eloisa James, Stephanie Bond, and Karen Hawkins are some of the authors who were included in our very first issues.

Over the years we’ve featured reader favorites like Linda Howard, Sandra Brown, Janet Evanovich, Sherrilyn Kenyon, and Lisa Kleypas, but just as important (maybe even more so) we tried to introduce to our readers debut authors like Elizabeth Hoyt, Sherry Thomas and Carrie Lofty (all of them now or soon to be available in German).

KAH: In October 2005, we published a special about the paranormal romance genre. At that time it was obvious for anyone watching the US market that it was here to stay. In Germany, though, editors were still very skeptical. They didn’t believe that vampires had a chance with German readers.

They were obviously wrong.

The challenge was that we didn’t have many German titles to tell our readers about. We were able to inform them about US releases and wet their appetites, but it was another two years before they could walk into stores and buy books by authors like J.R. Ward, Lara Adrian, and MaryJanice Davidson.

Did the article and our coverage help? I only know that one of the first publishers to believe in the appeal of the genre made sure to work closely with us when they released their first paranormal romance titles.

TGE: What is the current state of science fiction romance among German readers? Where do you see it heading?

KAH: To be honest, we don’t know much about it. Hopefully that will change with some of the industry interviews we are planning. However, from our perspective, there seems to be only a very small readership for the genre, not enough for German publishers to continue their series (or to try new titles). I know of at least several series for which I can’t find new release dates. Not a good sign!

In talking to German romance readers, it is obvious that many of them don’t know that the available books could appeal to them. No wonder, as the packaging is not designed to attract a female readership. I don’t see it going anywhere as long as that doesn’t change.

And it would be good if more science fiction romance titles made the US bestseller lists and win important awards in order for German editors to take notice, and for German readers to demand translations. Maybe the many planned science fiction movies with hunky actors (and hopefully great romance subplots) will help too. I’m hoping for our readers to be curious enough to give the genre a try.

TGE: What special features can readers look forward to reading in forthcoming issues?

KAH: We want to take a closer look at young adult titles, the fantasy genre, romance authors writing cozys/mysteries as well as what is new and coming up in historical romances. We are also planning a special feature about the British romance market and it is past time for us to revisit the paranormal and romantic suspense genres.

In a word, groovy!

Happy Anniversary, LoveLetter! I’d like to express my heartfelt appreciation for this additional opportunity to share my love of science fiction romance and help introduce it to such a vast new audience. Thank you, Kris, and thanks to your wonderful, hardworking team. And, many thanks also to the authors who participated in LoveLetter’s SFR special with such wonderful enthusiasm.