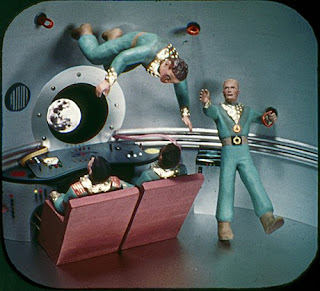 I’m a subscriber to the idea of “just enough” worldbuilding, especially when reading a cross genre novel like science fiction romance.

I don’t require pages of explanation about certain details or in some cases even a sentence. Mainly this is because of my awareness of practical factors, such as word count limits. Additionally, like many readers I bring a certain level of knowledge of genre tropes to fill in gaps or I’ll extrapolate from what’s being described on the page.

But those aren’t the only reasons.


It seems to me that some worldbuilding details are unnecessary because many are rooted in basic high school science. Chances are, if one is reading a novel with science fictional elements then he/she has dabbled in at least a few introductory courses (and boy do I ever regret weaseling my way out of first year chemistry. Ouch.) Yet still other details can even be gleaned from visual mediums, and these have become so commonplace that we assume a certain standard operating procedure (for example, starships have to be airtight).

Allow me to qualify a few things. First, I’m putting aside the issue of whether the speculative aspects are rooted in plausible science. Second, by unnecessary details I mean those that aren’t germane to the story. I’m referring to details I encounter so frequently across various books that they become repetitive. I don’t know if this is because they are standard/ingrained, but I also suspect that authors fear criticism or backlash if they don’t include them. Thirdly, the list is limited to the nature of what I read. If I suddenly devoured a slew of cyberpunk novels, the list would differ markedly.

Below are examples of details that I automatically bring to certain science fiction stories. I will assume they are in place the way I assume a car has four wheels (for example, if I read about a car accident and the author describes a punctured wheel, I wouldn’t suddenly exclaim, “Hey! You didn’t mention the car had a wheel. Continuity error, ya moron!”).

Right or wrong, I propose this list of unnecessary science fiction worldbuilding details:

1. Furniture being described as bolted to the deck of a starship (umm, duh).

2. Anti-gravity units. If they’re in use, I don’t need to know about them until something happens to them (might as well describe every tiny facet of a ship’s engineering then—all in mind-numbing detail).

4. Water on a starship is recycled (umm yeah, so is the air).

5. Firing high powered weapons aboard a starship is a bad idea (I’ve seen this one more than I can count).

6. I understand that it requires more power to launch a ship from a planet’s surface than from a space station. Newton explained this awhile back. (If a culture has the technology for starships, I assume they have the power to launch them from anywhere they dang well please.)

7. The process of passing through an airlock. Again, no need for lengthy details or even any details so get on with the story already (we don’t need the inside scoop on the hull’s paint drying, either).


Perhaps my approach is an odd one, and I anticipate plenty of disagreement, which is fine. I will also anticipate the argument that these details need to be included on a regular basis because there are readers who if bereft of them might feel left behind. Readers come to SF with varying levels of experience, and yeah, I can see the appeal of describing bolted furniture right before the anti-grav unit crashes.

On the other hand, it takes more than one or two books to become familiar with a genre, and part of the excitement science fiction has to offer is the journey to fascinating settings and exotic worldbuilding details. I’m just saying that I’m all for authors concentrating on new ones.