I take my daughter—currently at the ripe old age of three—to the library once a week.

The typical routine entails attending “story time,” playing assorted games/puzzles, and compiling that week’s lineup of books to borrow. Mostly, I participate or watch while she plays, but there are moments when she is so absorbed in an activity that I’m simply a bystander. For me, that provides precious reading time.

On one of our recent trips, we visited a library out of town. I couldn’t find one single science fiction romance book to read (the selection there bites the big one), but this library regularly displays new or new-ish SF books on a table right near the children’s section.

Desperate to occupy my mind while my daughter engaged in self-directive play, I saw a book by an author I’d heard was popular but never sampled. No time like the present, I thought. While my daughter experimented with unique ways of posing plastic farm animals, I dug in to the book with no expectations except to discover something new.

After I started reading, I had a very disturbing experience. 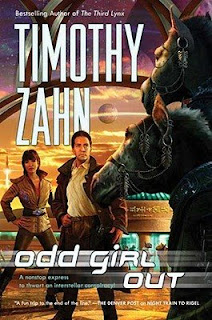 The book I picked up was ODD GIRL OUT by Hugo Award-winning author Timothy Zahn. He also penned “the all-time bestselling Star Wars spinoff novel HEIR TO THE EMPIRE.”

ODD GIRL OUT is the third book in his Quadrail series (and who doesn’t love a cosmic locomotive, eh?!). The style struck me as Raymond Chandler-esque hardboiled SF, and the story starts out with the typical encounter between the jaded protagonist (Frank Compton) and a beautiful dame whose life is in danger. In classic Philip Marlowe style, the protagonist was cocky and flippant. Despite massive doses of derivativeness, I was willing to forgive and keep reading as it was an obvious homage and stylistic decision on the author’s part. Onward I read.

The pace moved along at lightening speed, so I zipped through the beginning very quickly. I was intrigued by the reference of Compton’s female partner, Batya, with whom he was about to rendezvous. Much to my surprise, there was a hint, just a hint, of Compton having a romantic interest in Batya. Batya also seemed like a kick-ass, take-no-prisoners type of heroine.

Cool, I thought. And onward I read some more.

Then, I reach page 45, where Compton updates Batya about his latest case (no spoilers ahead, by the way). While talking, he offers up this piece of introspection: “Her knack for keeping quiet at the right time was one of her most endearing talents.”

Okay, hold on. What now?

I re-read the sentence, thinking I might have misread it. I don’t think I did, but I admonished myself to keep my cool and keep reading.

Shortly thereafter, Compton expresses his doubts about Batya participating on the case because he felt it was too dangerous. Sighing, I figured I might be able to forgive that since he digs her and feels protective. In response to Compton’s apparent rejection, “Her face was expressionless, the words nearly so. But just the same, the hurt behind her eyes managed to make it out into the open. Another of her many talents.”

And at that point, I put the book down.

I felt so irritated and disappointed. I’m a very forgiving reader, but I simply could not stomach the passages I quoted. Much coolness about Batya was foreshadowed earlier in the story, but during her formal introduction, the reader learns that her two most valuable “talents” are her emotional vulnerability and her ability to shut up and listen.

I’m not knocking those qualities in and of themselves. It’s the context that bothered me. It’s the future, for one thing. For a second thing, Batya is apparently this super spy vixen, but that’s not what’s emphasized. I really can’t figure out if Timothy Zahn meant to portray Batya in such a politically incorrect fashion or if the portrayal was unintentional—possibly his version of a tender exchange between would-be lovers.

Perhaps my negative reaction ensued because I, being female, am not the target reader. Clearly, I’ve been spoiled by many a science fiction romance with heroines who are celebrated for more than just their feminine qualities.

It could be a possibility that Zahn was simply pandering to his true audience. I get that, but only to an extent. No author can please every reader, but in my humble opinion, Zahn could have worked a little harder to bring female readers into the fold by highlighting Batya’s talents that earned her a position as his partner.

I will probably at least sample HEIR TO THE EMPIRE at some point, but Batya’s treatment soured me on Timothy Zahn for the moment.

What do you think? Am I the odd girl out on this one by having such a strong reaction? Or, have you ever encountered something similar in a book that simply caused you to put it down, never to return?