RWA ’09 may be over, but the excitement remains….

When we last left Agent Z, Inter-Galactic Spy and all-around clever goose, she was about to be assimilated, annihilated, and thoroughly annoyed by the encroaching space pod-controlled crowd at RWA ’09.

And as we learned, not owning a Calico cat named Frank carries its repercussions. We now join her transmission, already in progress… 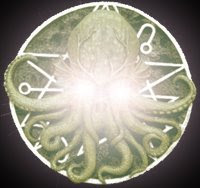 Okay, forget the file. I have to remember what my Inter-Galactic Sensei said to do in such situations: RUN!

Oh, the blood! Oh, the humanity! Oh, crap! I got more blood on me. I hope that “New & Improved” detergent I bought is good for extraterrestrial whatsis.

Heather! Okay, when you last heard from me, I was about to be assimilated, annihilated, and…

***skizz*** Yeah, yeah, yeah. We already covered that in the intro. I mean what’s going on now at the conference at this very second? Any SFR sales? Can we officially announce that space opera romance is the new black?

It’s a nightmare. The crowd’s getting crazier. Both the E-Pubbed and Print-Pubbed teams have foam pouring out of their mouths, and worst that than—expensive perms are starting to wilt! It’s terrible, just terrible, I say! They’re now jumping up and down and shaking all around. It reminds me of some sort of an alien hokey-pokey.

Yeah, I’ve been meaning to talk to you about that. You know the new iPhone has….

***skizz*** Uh, let’s discuss this later. Your Gor trip kinda killed the budget for this year.

Oh, that. But in my defense, those were nice outfits!

Wait. What’s that in the far corner of the room…? It’s another pod splitting open. This one is larger than the rest. Much larger! It’s also wearing a crown and has something in its, uh, hands. It appears to be some sort of remote control device and it’s blinking.

***skizz*** That must be what it’s using to make everyone act so crazy! And I’ve seen enough Saturday morning cartoons to know that if you smash it, everyone will return to normal!

But there’s an AV setup in the corner. What if the remote has no control over them and the creature’s just getting ready to pop in a DVD to enjoy…like THE PHANTOM MENACE or BABYLON A.D.?

Okay, I’m here. Everything’s cool. Wait a minute…someone’s approaching me. Hard to tell who it is underneath all the blood and guts.

(Speaks to someone out of range) Oh? Really? Yes, I’m listening…. Well, in addition to the advance, I won’t settle for anything less than 50% of the royalties. Have it all hand-delivered by the cast of 300, too. Of course, they have to wear the same outfits…! (Tsk! What a question!) Here, you’ll have to talk to my agent… Hang on a second.

Heather, I’ve just been approached by a bunch of heavy hitter editors—Anne Sowards, Ann Groell, Heather Osborn, and Angela James. Apparently, they all liked my most recent ass-kicking adventure so much that now they want to offer me multi-book deals! Plus, I see Kris Alice Hohls—she’s offering to devote an entire issue of LoveLetter to me!

I think I’m going to hold out for payment in gold, though. In fact, I want ingots shaped like Han Solo frozen in carbonite! That’s the ticket!

What can I say? All in a day’s work. Until next time, Agent Z out.