Throw That Novel into the Ring! 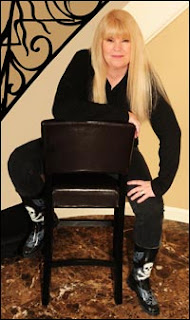 Gayle Ann Williams lives a life of contrasts. For example, she lives on a small island off the coast of Washington in the amazing, beautiful, wet, Pacific Northwest. Accessible only by boat or air, the scenic island doesn’t have a stoplight. Not one. She also spends months at a time in her favorite city, Las Vegas, Nevada, where the metropolitan area exceeds a population of two million. Here she can be found pursuing her second love after writing, playing poker. Whereas the desert offers a unique beauty, Gayle often feels, due to the landscape, she is on the moon when she is in Las Vegas. On a very fun moon to be sure. Oh. And if you see her driving in Las Vegas, you might want to get out of her way. She’s not used to stoplights, remember?

Growing up in a small, cowboy town in Eastern Washington, Gayle, after numerous visits to Seattle during her college years, fell in love with the ocean. Trading her spurs for a sea kayak, she left her Rodeo Queen roots behind (yes, she really was a Rodeo Queen) and moved to the “rainy” country. For a time she lived on a sailboat and to this day she thinks sailing throughout the San Juan Islands and the Canadian Gulf Islands as one of the best experiences of her life.

Now read on to witness the gale forces involved in the author’s path to publication!

First, I’d like to express a warm hello to Heather and all the fans of The Galaxy Express. It’s a pleasure to be here, thank you for the invitation.

My name is Gayle Ann Williams, and I live on a small island off the coast of Washington State, approximately sixty air miles from Seattle, WA. I originally lived as we say, “East of the Mountains,” in cowboy country, but I traded my spurs for a sea kayak and moved to the wet, but oh so beautiful Pacific Northwest coast; a region of the country now made famous by Stephenie Meyer and her amazing Twilight Series. And yes, it really can be that dark and rainy, for, well, months.

Today I’d like to talk about my publishing journey, because for me, before I got “The Call,” I was (and still am) always fascinated how people achieved their dream of becoming a published author.

For me the road led to a win in a contest; the Dorchester Shomi Fiction contest. I was currently writing Paranormal and Urban Fantasy, and I liked the edginess of the Shomi line and the stories that were being written there. When I saw the contest, and that the winning manuscript would be awarded a publishing contract, complete with advance and royalties, I knew I wanted to throw my hat in the proverbial ring. And I’m so glad I did. The result for me was a dream: a publishing contract for TSUNAMI BLUE, my post-apocalyptic, paranormal romance that will be coming out from Dorchester in April of 2010. I also signed with a wonderful agent, and so look forward to traveling this publishing road together.

Here is how I approached my entry. First, I based the idea of TSUNAMI BLUE on a personal experience. On Christmas night, in 2004 I boarded a plane out of Seattle and flew right into the Southeast Asia Tsunami. In the air when the deadly wave hit, I knew that if I had arrived earlier, I might have been a statistic. As I traveled around the region, I listened and observed, hugged and cried, and all along, the writer in me asked, what if? Little did I know a few years later those amazing memories would be the basis for my novel, TSUNAMI BLUE.

Second, I took elements of my personal life, (the old adage of write what you know), and incorporated them into my story. For example, I’ve lived on a sailboat, I’m an avid poker player, and I placed the story in my home setting, the beautiful San Juan Islands of Washington State. I even wrote my favorite rain boots into the story. Curious? They’re pictured here.

Next, I mixed in my imagination, writing what I didn’t know. What would a world be like decimated by deadly tsunami waves? What if there was no infrastructure and society was ruled by “Runners,” modern day pirates? And what if Kathryn “Blue” O’Malley, my heroine, known as Tsunami Blue, held the paranormal ability of knowing when the next wave will hit? As a writer, I can’t encourage you enough to keep asking, “what if?”

And third, and perhaps most important, I did my homework. I read the Shomi books. Not one. Many. I understood the tone, the edge, the feel. I asked myself, is this the kind of story I wanted to write? Was I excited about it? Was it for me? The answer? A resounding yes. The result? TSUNAMI BLUE, the winning entry of the Shomi Fiction Contest.

Dorchester Publishing has now folded Shomi into their other lines, it’s true. But Dorchester still continues to publish cutting edge books of this type, and I would encourage you, if these are your kind of stories, to look for them.

In the meantime, Dorchester Publishing is currently sponsoring another unique, exciting publishing contest and you can read about it here.

Don’t be shy; throw your novel into the ring. You never know where it may land. And just like TSUNAMI BLUE, it may be the winner. Happy reading to all and the best of luck to those of you who are writers. Thanks so much for having me.