Kicking off our series of guest posts for Parallel Universe is aspiring science fiction romance author Laurie Green. As the proprietor of Spacefreighters' Lounge, Laurie features the latest news on "science, physics, astronomy and technology" to inspire stories in SFR. With that in mind, she examines the intersection of technology, blogging, and creativity. 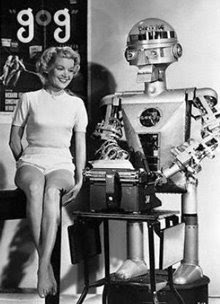 A few facts about blogs.

Blog is a corruption of the words "web log."

Blogging began in the mid-1990s but exploded at the time of the terrorist attacks on September 11, 2001.

Blogging is still considered to be in its early stages. No one knows how it may evolve.

With blogs being one of the key ways that writers and authors communicate with potential readers, I decided it might be fun to ferret out some ideas on the future of blogging. The speculation over what blogging will (or won’t) evolve into was diverse and often surprising.

There’s a wide range of opinions on if the popularity of blogs will continue to grow or diminish dramatically in the coming decade. Although there has been a noted shift toward Twitter as a conversational tool, for writers and authors blogs still provide a better venue to build reader interest in a book or product. But blogs need to evolve along with the trends of internet use or be left in the virtual dust.

Here are a few concepts that may come into play for future blogs.

ReadWriteWeb’s opinion is that with so many blogs vying for a follower’s available time, “lifestreaming” may become the most popular blog format. Lifestreaming is posting short bits of discussion, dialogue, pictures, interesting tidbits, related links or news, etc. in a layout that’s attractive to the eye and user friendly.

ReadWriteWeb proposes that with the number of blogs now reaching the point of information over-saturation, most readers have developed internet ADD—their online pattern is to scan and move on, scan and move on. Providing quick, concise and diverse bites of information in easily digestible layout keeps the reading light and easy, thus catering to the iADD syndrome, which may result in a reader spending more time on the blog overall, and not less.

The audio blog may also be the blog of the future, where posts would be made through the use of audio tools instead of typed screens. This would allow the incorporation of sound effects, a sound track, or music that inspired certain scenes or the book as a whole. There is technology in development to allow even comments to the post be left in verbal format. Audio, in combination with text and pictures, could take blogs to a new level of communication that might hold a reader’s—or listener’s—interest much longer than a traditional blog.

The “animated spokesperson” might also take on a larger role in blogging once it becomes more affordable. Sitepal and Website Talking Heads are two examples of animated or live action characters that can pitch a product (or a book). To date, these animated hosts are slanted more toward commercial websites.

As the technology becomes more sophisticated and cost effective (not to mention faster to download), writers or authors might choose one of their characters to serve as their blog host, have their characters pitch their book to readers, recreate scenes from the book with two or more characters, or make announcements regarding book signings and other promotional events.

Another idea is to do away with the animated host altogether and let the blog author become the host via live video streaming. Consider live chats or debates with readers on various important topics, video workshops, or video pitches of the writers/authors work. It offers some intriguing possibilities, but also some drawbacks.

NPSites.com ® (which, by the way, is an excellent source to follow on Twitter to learn about the latest in web and media technology) offers some insightful observations on the future of live video streaming in their online article Is Live Video Streaming Blogs The Next Big Thing? Probably Not - But Why.

But even by incorporating some or all of the technology above into an exciting blog format, a blogger still needs to be able to seek out like-minded readers in large numbers, or the blog isn’t being all that it can be.

Another trend for the future to help bloggers and potential readers find each other may be improved “tagging.” Tagging was explained in a 2005 article in Business Week’s The Tech Beat. At present, it’s still an emerging technology similar to that used on the photo-sharing site Flickr.com to search out pictures on a specific topic. Tagging of blog articles would work in a similar way, with Technorati.com or other blog search engines using the tags to retrieve search results, and also to stimulate pseudo blog conversations on a selected topic between bloggers.

For instance, if a reader wanted to look at blog posts about “SFR” they would be given links to information posted on a number of different blogs, not unlike the hashtag concept on Twitter, but much more specialized. Although Google and other search engines already do word searches, the tagging concept would be more sophisticated and hopefully, more standardized. For example, searches may incorporate smart technology that would know posts tagged SFR, SciFiRom and Science Fiction Romance all refer to the same subject. This is a shortcoming with current search technology.

In the Where Do You Go With 40,000 Readers? video and discussion available on io9 panelists Ron Hogan, John Scalzi, Patrick Nelsen Hayden and Tobias Buckell discuss online community building for science fiction writers. Perhaps one of the more important points made is that the internet exists to entertain. If writers can make their blogs entertaining to readers—either by use of technology, engrossing content, and/or just plain wit to reach a readership—it’s a great way to develop sales. As John Scalzi commented, he’s been a blog presence for roughly ten years, and it’s given him the opportunity to reach tens of thousands of potential readers to help build interest in and the sales of his books.

If technology can transcend the stigma of being “too gimmicky” and offer true reader entertainment, then the future blog will be very much a major tool in attracting an interested public to the writer’s product, or in supporting a particular author or genre in general.