Aspiring author Lisa Paitz Spindler, a.k.a. Danger Gal, knows how to mix sci-fi with romance. You can read an excerpt of her science fiction romance THE KINSHIP at Authonomy. She’s a member of Writers At Play as well as a book reviewer for SF Signal. Is there anything this super sister can’t do? 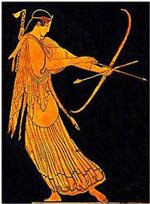 When Heather asked me to contribute to her Parallel Universe coverage of the RWA Conference coming up in two weeks, I had to ask myself what exactly is the allure of Science Fiction Romance for me? What is it about SFR that initially drew me in and keeps me reading (and writing)? I have to admit it was Athena Andreadis' review of Star Wars over at Strange Horizons that helped me sync all the elements together, specifically this quote:

"In Mary Renault's The King Must Die, the Amazon Hippolyta agrees to a parley with Theseus, 'one king to another.' You are a queen, he corrects her. No, she replies, I'm a king like you . . . a woman king. Hippolyta becomes the irreplaceable center of Theseus' life because she is his equal. Would that Mr. Lucas had been 'radical' enough to make Padmé as powerful as Buffy, the slayer and lover of vampires. . ."

Anyone who reads my own blog probably will not be surprised that the ultimate answer to what draws me to SFR is a strong heroine on a particular kind of journey, one that includes the usual adventure plus some kind of love story. Here's why the mingling of Romance with other genres like Science Fiction, Fantasy, and Horror has created an atmosphere where the genre's already female-focused attitude enables heroines to take on new, even more imaginative, roles and to engage in a broader journey than many other heroines. 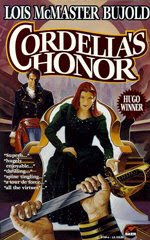 Nearly every Friday I profile such strong heroines, female characters in books and TV whose depiction subverts our common stereotypes of women. Many of these women come from Science Fiction Romances such as Soz Valdoria in Catherine Asaro's PRIMARY INVERSION, Cordelia Naismith from Lois McMaster Bujold's CORDELIA'S HONOR, Chaz Bergren in Linnea Sinclair's GABRIEL'S GHOST, and Banzai Maguire in Susan Grant's THE LEGEND OF BANZAI MAGUIRE. While it's tempting to label many of these kinds of characters just as "kick-ass chicks," because of this broader journey they are much more than that. They are a new archetype that I refer to as "Artemis Unbound."

In Greek mythology, Artemis was the daughter of Zeus and Leto and the twin sister of Apollo. In my modern interpretation, Artemis is therefore daughter of the ultimate king of the gods, and holds equal footing with her brother in the family birth order. The story of Artemis goes as so: At the age of three, Artemis asked her father, Zeus, for six wishes and he granted all of them: (1) that she remain chaste for eternity never to be confined by marriage, (2) that she have lop-eared hounds, (3) stags to lead her chariot, (4) nymphs to be her hunting companions, (5) those nymphs comprised of 60 from the river and 20 from the ocean, and (6) a silver bow and arrow like her brother's.

This paints a very interesting picture of Artemis: She wanted the freedom equal to that of her brother, as well as pretty puppies, a posse of BFFs, and cool-ass weapons to boot. This depiction of the archetypal Artemis shows up all over Science Fiction, Fantasy, and even Horror. We also recognize it as an Amazonian archetype. The merging of the treatment of this archetypal kick-ass female figure with Romance, though, liberates Artemis and her Amazonian counterparts from their chastity restrictions. Artemis chose chastity because it was the only avenue available for her to gain independence, and the Amazon legend bears some similarities to her story in that they lived apart from men, only mingling with them for childbearing purposes. 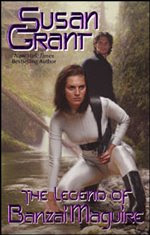 Artemis Unbound is free to engage in true intimacy, which often includes sex, in addition to all of her other freedoms. Romance, with its focus on ultimate personal actualization through emotional and physical intimacy, enables female characters to find a level of profound freedom not necessarily evident in other genres. Also, Artemis' and the Amazonian preference for the company of their girlfriends had much more to do with tickling the male fantasy of "girls gone wild" than anything else. Artemis eschewed males completely, thus taking herself out of the mating game, but Amazons oddly held up the status quo by maintaining their place as mothers. Both are defined by their relationships, or lack thereof, to men.

The new, unbound, heroines of Science Fiction Romance and Paranormal Romance get to have all the kicking-ass fun and they still get the guy or girl in the end. If it's the girl they want to partner with, it's not out of some male fantasy, but a real connection. Also, as Jennifer Crusie has pointed out about the genre in general, Romance heroines aren't made to wear giant letters on their chests, die under trains, or, in the case of Amazon Queen Penthesilea, aren't raped after death and dragged behind chariots. Historically and mythologically, the price for female empowerment has been a high one, but heroines in Romance aren't rendered that fine. Instead, they achieve a Happily Ever After.