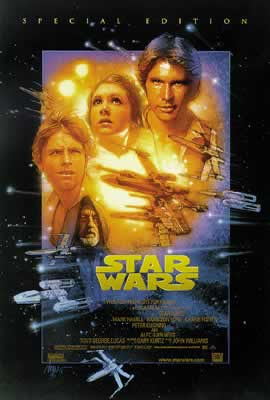 In Part I, we discussed contenders for the most effective label for blends of science fiction and romance (excluding romantic SF, which technically falls under the SF umbrella) and the consensus was that we forge ahead using “science fiction romance” or some variation thereof.

The label, of course, only goes skin deep. In order for blends of SF and romance to qualify as SFR and appeal more widely to romance readers, it’s important that the external plot/science fictional elements don’t overshadow the romance (as BevBB noted).

But how can that be accomplished while also delivering quality speculative elements?

What factors will provide SFR with wider appeal?

I agree very much with Rowena Cherry’s idea—as noted in the comments for Does Science Fiction Romance Need a Gene Roddenberry?—that future SFR stories should be fashioned after Star Wars rather than Star Trek, especially if the target audience is romance readers.

Case in point: “The Force” is vague; the Millennium Falcon just blasts off—no technical explanations are provided as would be the case on Trek. The recent Trek movie took this path too, and outgrossed every other Trek film to date. Much as the achievements of Star Trek’s empire are laudable, two main drawbacks for science fiction romance are its technobabble and muted conflict (not across the board but a significant issue given Roddenberry’s vision of the future).

And like Linnea Sinclair noted, we had Gene Roddenberry—so what is the need for duplication?

Elise Logan stated in the comments that “Christine Feehan, Gene Roddenberry, Laurell K. Hamilton all have something in common. They built a world and populated it with their stories. They created a mythology and an entire universe that is a whole and complete creation.”

Based on all the comments provided by my esteemed passengers and my own reflection, I culled together a few possibilities:

* Include accessible speculative elements more often than not

* Make character-driven stories a cornerstone of the sub-genre

* Include more Alpha heroes, at least in the beginning, to help readers transition from paranormal romances (or at least heroes that convey lots of power and danger).

* Create heroes/heroines who embody the speculative element in some way (e.g., cyborgs, beings from other worlds).

* High concept stories/characters that emulate Christine Feehan’s Dark series–a la Linnea Sinclair’s Dock Five series. In other words, stories set in a similar universe with some kind of brotherhood (sisterhood?) from which the author can spin countless stories.

You may know of others, and I’d love to hear about them. I would think one of the greatest challenges lies in deciding on the scope of a story. Buddha knows I love a grand, sprawling, epic space opera, but they don’t really lend themselves to a hybrid tale of romance and science fiction. The scope would dictate which details to keep and which to ignore. The tighter the focus, the more we can be assured our expectations will be met.