In Does Science Fiction Romance Need a Gene Roddenberry?, we discussed many crucial elements regarding both the nature of science fiction romance as well as its historical journey in the world of publishing. Perhaps I should have titled this post “Does Science Fiction Romance Need a Christine Feehan?” since so many of you contributed valuable information on her impact in paranormal romance, and how it could potentially benefit SFR.

For this post and the two that follow, I loosely organized the feedback in an attempt to further lay the foundation for what needs to happen in order for SFR to gain in popularity within the romance community. However, “popularity” can be defined in several ways and except for sales can be difficult to measure. Regardless of whether we seek to attract five new readers or five hundred thousand, it seems there are a number of key factors to address.

Here is the first:

The GREEN EGGS AND HAM conundrum

Regarding the “science” in science fiction romance: Hoo boy, this is a biggie.

What are our choices? Either we sell readers on the appeal of the (accessible) speculative elements and keep science fiction romance, or we change the name to obscure/dress up the nature of the content. Paranormal romance lucked out because paranormal is a “softer” term than “horror.” Yet it also describes the stories in the genre pretty accurately. What is the separate-but-equal alternative for SFR?

This issue reminds me of the SyFy Channel name change. The head honchos reconfigured the channel’s name for a reason. It’s an attempt to gain new viewers outside of SF fandom. They already had SF fans, so the name change reflects an attempt to widen the net. SF fans were not the target audience for this change.

As we discussed recently, there’s an underlying issue tied into the name. A significant one is the idea that science fiction is a “boy’s game” (to borrow passenger Rae Lori’s description). As a result of this propaganda, female readers have shied away as a result. Thus, my concern that one of the reasons romance readers avert their gaze from “science” anything is because voices of the past have convinced them that women can’t understand science or won’t enjoy it. The belief is perpetuated in art despite the fact that speculative elements in an SFR are for entertainment purposes.

I’ll admit I’m bothered by the implication that (generally) romance readers will happily try SFR as long as it’s called something else. It seems so…transparent. I’m dismayed to think that a mere label contains so much power it will make them more amenable, regardless of whether the content matches their tastes.

What’s the more realistic goal, then? Do we demonstrate the appeal of speculative elements for romance readers, or cast out “science” from the name once and for all? I’m even going to assume for the moment that we’re not factoring SF readers into this equation. We also should take into consideration that publishers are continuing to use the label “futuristic romance” no matter how enamored fans are of a particular term.

What label other than “science fiction romance” could both accurately describe the sub-genre and make it appealing to romance readers at the same time?

* “SFR” or “Sci-Fi Romance or SF Romance: All shorten the “science fiction romance” label and obscure the science angle somewhat. Would that be enough?

* Futuristic Romance: It’s familiar, short, and publishers both print and digital alike are still using it. If it’s the most effective way to appeal to romance readers, then we should all do a 180 and start using this term again. Period.

* Speculative Romance: Could this be the new “futuristic romance,” or is “speculative” as threatening (not just to readers but also to booksellers) as the word “science?” Some may not consider it as sexy as “futuristic.”

A Spoonful of Sugar 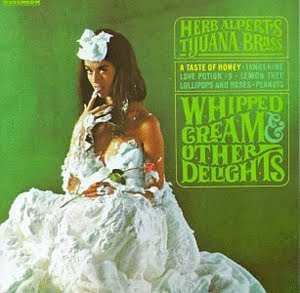 Remember Herb Alpert’s Tijuana Brass’ album Whipped Cream and Other Delights? Yeah, I thought you might. Well, that jazz album sold over six million copies in the United States, and let me tell ya, the main reason had nothing to do with Herb’s trumpet skills (although his memorable tunes ensured the product lived up to the packaging).

Transparent marketing or not, it was the whipped cream goddess that attracted the majority of those sales and started the popularity ball rolling. Once enough people actually listened to the music—a genre the majority of buyers would probably never have sampled without said cover—they discovered they actually liked it. This never would have happened unless the marketing department chose this photo over the typical group shot of several middle-aged guys. You see where I'm going with this....

Do we need to spruce this sub-genre up with a dollop of whipped cream? Is that what it would take? Does the label “futuristic romance” sweeten it up enough?

Or do we keep using the term “science fiction romance” and send the message that readers are missing out if they focus too much on the label? In other words, as Eloriealton noted, “We may very well be stuck with the label “Science Fiction Romance,” but that doesn't mean we can't take that label and redefine it, if we have to.”