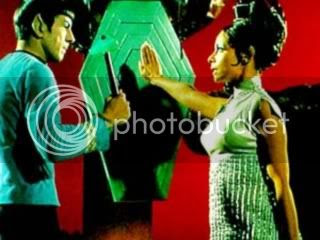 Now, I didn’t read the back cover copy initially. The story is set in the same universe as Ms. Marvel’s MEGAN’S CHOICE so I knew I would enjoy it, plus I like to be surprised. So it didn’t strike me until well into the story that holy guacamole, this is a science fiction romance version of pon farr!

Pon farr refers to that period of time every seven years in which a Vulcan character from STAR TREK goes into heat, at which time he/she must mate or die. The concept made its first appearance in the STAR TREK original series episode Amok Time, which was written by Theodore Sturgeon. In that episode, Mr. Spock enters a pon farr cycle and excitement ensues. 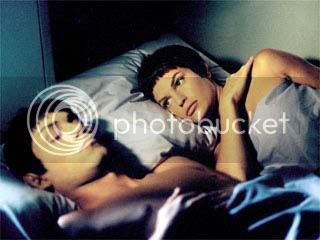 Other instances of pon farr in Star Trek include an episode with the character T'Pol (STAR TREK: ENTERPRISE); with Tuvok from STAR TREK: VOYAGER; and with Ensign Vorik, also from VOYAGER.

Fan fiction is another source of pon farr stories. That’s where you’ll find the science fiction romance angle, because the authors present pon farr as a natural and positive occurrence, as opposed to the Star Trek series and films, which imply that a Vulcan going into heat is a source of embarrassment or an abnormality. Most notable among the fan fiction offerings is Jean Lorrah’s THE NIGHT OF THE TWIN MOONS (1976). In this tale, “Amanda Grayson [Spock’s mom!] teaches [her husband] Sarek and then other Vulcan couples to enjoy pon farr and to accept their physical and emotional natures.”

Now, I’m guessing—and it’s just a guess, mind you, but a pretty good one, I think—Paramount, which owns the Star Trek franchise, is unlikely to release a film wholly devoted to Mr. Spock or another Vulcan navigating a pon farr cycle and falling in love (poop on them, I say!). That is why we must search among the nooks and crannies for our science fiction romance. Ellie Marvel wrote a story that, while completely unrelated to Star Trek, explores the themes of the emotionally repressed archetype.*

You know, characters like Spock, Data, and 7 of 9 of Star Trek, Admiral Branden Kel-Paten (GAMES OF COMMAND by Linnea Sinclair), Reef (HOW TO LOSE AN EXTRATERRESTRIAL IN 10 DAYS by Susan Grant), , Teal'C (STARGATE, SG-1), and many of Catherine Asaro’s Jagernaut characters (e.g., Sauscony Valdoria from PRIMARY INVERSION). When it comes to the emotionally repressed heroes, heroines—and by extension, readers—relish the challenge of winning over such an emotionally distant lover. 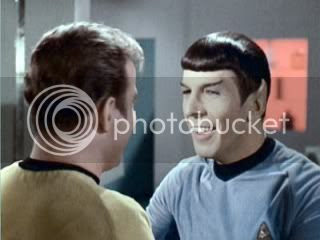 Like Ellie Marvel’s HEAT, this is a great opportunity for authors to explore the possibilities of mild-mannered beta heroes in SFR. These brainy beaus have locked their emotions away, but look out, since because of a science fictional element/worldbuilding concept, this type of hero can transform into a hawt sex machine! What a splendorous secret for the heroine to unlock. And only she has the ability to look past the hero’s dispassionate side and embrace his unleashed emotions—not to mention his wildfire sex drive. Lucky gal!

Know any other stories that go where pon farr has never gone before?