I control the lives and the brains of all the inhabitants here! I keep them alive as I see fit, just as a shepherd controls the sheep, and then, at any moment, shears the sheep!

I’ve seen many bad science fiction films in my lifetime. They’re not easy to avoid even if one is just a casual fan of the genre. What do I mean by “bad”? My definition includes but is not limited to poor production values despite a decent premise; a lame premise altogether; mediocre screenplay; abuse of SF tropes or one riddled with clichés; and bad acting.

Some films are so bad they’re good while others are just bad, bad, BAD.

Up until presently, I thought psycho schlock like MANOS: THE HANDS OF FATE (financed by a Texas fertilizer salesman) represented the worst of the worst. And with fare like SANTA CLAUS CONQUERS THE MARTIANS, ROBOT MONSTER (a film that was so cheap, they swapped their planned robot invasion force with some guy in a musty old gorilla suit—and thought no one would notice), and MARS NEEDS WOMEN under my SF belt, I thought I’d seen the depths of Dante’s cinematic depths. But recently, one film proved me so very wrong.

STAR WARS made its grand debut in 1977, a truly seminal year for both science fiction and for cinema. But it wasn’t alone. Lucas’ epic begat many other films vying for a taste of those Wookie dollars. BATTAGLIE NEGLI SPAZI STELLARI (a.k.a. WAR IN SPACE; BATTLE OF THE STARS; and too many other titles) was the other epic intergalactic adventure born that year.

The “story” is about a “handsome,” brash starship captain who leads his crew to a mysterious planet in order to investigate an equally enigmatic message from deep space. There’s also a bossy computer named "WHIZ," and…ah Buddha only knows what the heck this story is about. Just count me fortunate that I didn’t have to write the plot synopsis on the back of the DVD package.

Now if you’ve never heard of it, no worries—there are about a thousand reasons why. Say, let me share some of them with you! Check out a sample:

If it seems like that clip makes little, if any, sense, it’s not because you’re seeing it out of context—that’s actually the first three minutes of the film! Does it get better? Well that depends on your point of view regarding masochism. And keep in mind, this was produced in 1977—not 1960—despite that appearance.

One could say that WAR IN SPACE makes PLAN NINE FROM OUTER SPACE look like LAWRENCE OF ARABIA in comparison, and one would be absolutely right. I’ve never seen a film where everything about it was horrible all across the board. This film boasted such atrocious cinematography and was so badly lit that some scenes—if not half—were literally blanketed in darkness. Director Alfonso Brescia had apparently never acquainted himself with the term shot composition as all too frequently the camera would be pointed at an area of dead space between two characters (some of whom were facing opposite directions!).

Hmm, interesting mise-en-scène. I’m sure Michelangelo Antonioni would be quietly weeping impressed. (Interesting side note about Brescia: The guy actually did several films with SFR elements, I kid you not.)

The special effects, while almost recognizable at times, went so absurdly south as the film progressed that I kid you not, the villain is nothing more than some kid’s toy robot. (See below. Yes, that's really it.) The dialogue (going by the dubbed version) was so incoherent it seemed as though the voice actors had ad-libbed the entire thing (which they probably did...over several empty Jägermeisters). 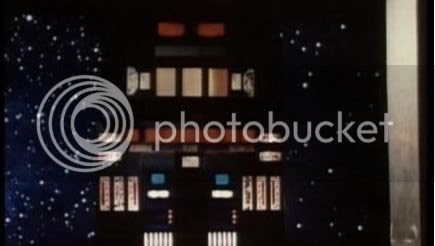 Well, since WAR IN SPACE screwed up so royally as far as the science fictional elements and production values, what about the romance? It seemed to have multiple romances unfolding…or rather, sprouting up with virtually zero set up and going nowhere fast. One neat bit did include a computer program whereby couples could lie down side by side (twin beds, of course) and make passionate virtual love. That is, if you can get past the wonky, badly dubbed dialogue and space discothèque backdrop. But hey, the hot lovin' was there! This wacky BARBARELLA sex device, which resembles a miniature Death Star, projects its funky 60s patterns on the walls and…evidently does something else as well (I’m not trying to be coy here; it’s just literally never revealed). What’s the name of this cosmic love device? Why it’s the (wait for it) “Cosmic Love.” Yep, that’s really it. Thought long and hard on that name, didn’t you boys?

But wait! There's more: When I envision or read about military protocol aboard a starship bridge, it never, ever includes personnel milling about like they’re at a bloody cocktail party. I suppose it doesn’t really matter with this film because none of their duties were even explained. It’s also the most crowded bridge I’ve ever seen depicted on film—chairs are practically flush against each other like a perfect set of teeth. And get this—women and men would laugh and even make eyes at each other during the most inappropriate times—like when one of their fellow crew members is about to die. I feel the romance here...!

Incidentally, WAR IN SPACE never found distribution in the United States at the time it was released in Italy. Gee, I wonder why…?

But the real reason I wanted to share WAR IN SPACE with you was the realization that bad films like these actually affirm how much I enjoy science fiction romance in all of its incarnations. It’s hard enough to pull off a bad film or book. It’s something else altogether to pull off a quality piece of entertainment, one that becomes infinitely more than the sum of its parts.

Thank you for sharing science fiction romance with me in 2009. Now, The Galaxy Express rumbles onward through time and space in search of further adventures. The year 2010 has a very nice ring to it.